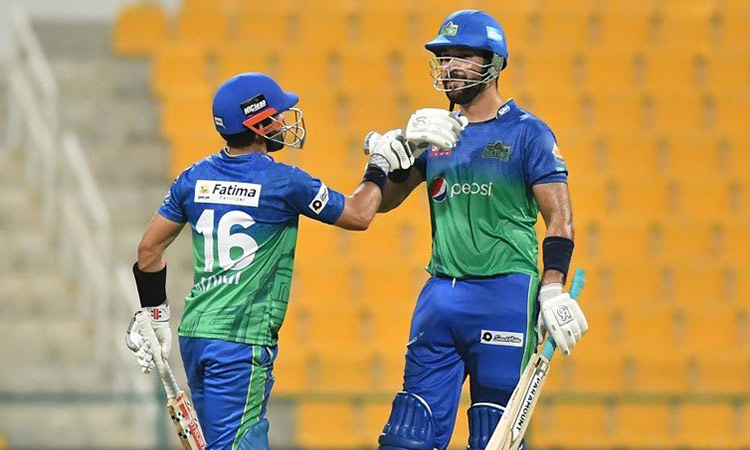 A maiden four-fer in his sixth T20 match by Shahnawaz Dahani and a century second wicket partnership between Mohammad Rizwan and Sohaib Maqsood steered Multan Sultans to a clinical eight-wicket victory over Peshawar Zalmi in the 21st match of the HBL Pakistan Super League 6 at the Sheikh Zayed Cricket Stadium on Monday.

Shahnawaz returned figures of 4-0-31-4 to restrict Zalmi to 166 for seven after a rapid 40-ball 56 by Sherfane Rutherford. Rizwan and Sohaib then stitched a 116-run partnership from 76 balls to set up Sultans’ win with 21 balls and eight wickets spare.

Rizwan stroked his 20th half century in 136th T20 match while scoring a strokeful 56-ball 82 not out, while Sohaib contributed 61, an innings that came off 31 balls and included four fours and five sixes.

Rizwan’s innings was studded with nine fours and two sixes.

Shahnawaz and Rizwan also capped a fine evening for Multan Sultans by moving to the top of leading wicket-takers and run-getters’ list, respectively. Shahnawaz now has 13 wickets in the series, while Rizwan leads the field with 408 runs with his national captain Babar Azam of Karachi Kings second with 343 runs.

Rizwan and Sohaib, who had suffered a wrist injury while fielding, had got together after Shan Masood had departed at the score of 45 in the fourth over. The two batsmen dominated Zalmi bowling with excellent shot selection and precise hitting, leading Sultan to 59 for one after the PowerPlay overs and 100 for one at the halfway stage.

Earlier, Peshawar Zalmi, put into bat, slipped from 71 for no loss to 117 for five in the 16th over to finish at 166 for seven – thanks to a 40-ball 56 with two fours and four sixes by Sherfane Rutherford.

Zalmi collected 52 runs without any loss in their PowerPlay overs, while they reached 84 for two after the halfway stage. In their final five overs, Zalmi scored 56 runs with Rutherford dominating the scoring.

Openers Kamran Akmal and Haider Ali played innings of contrasting styles with Kamran scoring a fluent 27-ball 35 and Haider chipping in with an uncharacteristic 30-ball 28. David Miller contributed a 14-ball 22.

Shahnawaz Dahani was the destroyer-in-chief of Zalmi’s innings as he claimed the first four Zalmi wickets, removing the two openers, Shoaib Malik on the first ball and then Rovman Powell, who was brilliantly caught by Mohammad Rizwan.

The 22-year-old from Larkana is in the Pakistan squad for the tours to England and West Indies, and is billed as one of the future stars of Pakistan cricket. Certainly, in the early part of his career, he has demonstrated that the expectation from him are justified.

Islamabad United and Lahore Qalandars are on top of the table with 10 points each, followed by Peshawar Zalmi (eight), Karachi Kings and Multan Sultans (both six points). Quetta Gladiators are already out of the playoffs’ race after losing six matches in seven outings.

Earlier, a day after West Indies all-rounder Andre Russell was taken to a hospital after being struck on the helmet by a bouncer, South African cricketer Faf du Plessis collided with Quetta Gladiators team-mate Mohammad Hasnain during a Pakistan Super League (PSL) match and was taken for scans.

Du Plessis left the field soon after his collision with Hasnain in the PSL match against Peshawar Zalmi on Saturday.

He was seen sitting in the dugout before being taken to a hospital here for scans. He did not take any further part in the on-field action.

The incident occurred during the seventh over of Peshawar Zalmi’s innings when David Miller played a shot towards long-on.

Du Plessis and Hasnain, running from opposite sides, crashed near the boundary ropes with the Pakistani cricketer’s knee hitting the South African’s head.

Miller went on to score a 46-ball 73, while West Indian Rovman Powell provided the final flourish with an unbeaten 19-ball 43 to guide Peshawar Zalmi to an imposing 197 for 5.

In reply, the Quetta Gladiators couldn’t put up much of a fight and managed only 136 for 9 in the allotted 20 overs, losing by 61 runs.

This is the second blow for Quetta Gladiators after Russell, who suffered a blow on his helmet in the match against Islamabad United on Friday and was taken to hospital for scans.

Russell, who was replaced by fast bowler Naseem Shah under the concussion-sub rule, had smashed two sixes off Islamabad United’s Muhammad Musa in the 14th over before being struck by a bouncer.

Russell was seen being stretchered out of the dressing room to an ambulance during the first over of the second innings.