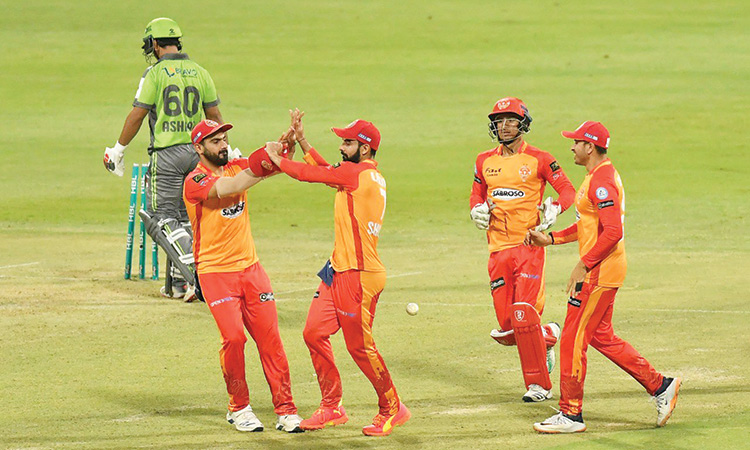 Islamabad United players celebrate the dismissal of a Lahore Qalandars batsman during their PSL match on Sunday. Courtesy: Twitter

An incredible 75 from Asif Ali followed by Muhammad Musa’s three for 18 handed Islamabad United a stunning 28-run victory over Lahore Qalandars in the 20th fixture of HBL Pakistan Super League 6 at Abu Dhabi’s Sheikh Zayed Cricket Stadium on Sunday. This win propelled United – the champions of the 2016 and 2018 editions – at the top of the points table.

Qalandars, chasing 153, were rolled out for 124 with 10 balls spare despite a solid start to their innings. The opening pair of Fakhar Zaman and Sohail Akhtar stroked a 55-run partnership that ended on the last ball of the power play when leg-spinner Fawad Ahmed trapped the latter in front of stumps.

Zeeshan Ashraf was run out five balls later after scoring just one but the run chase turned on its head in the 11th over when Musa dismissed Mohammad Hafeez with a short-pitched delivery.

Hafeez, in his attempt to pull the young pacer, handed an easy catch to Hussain Talat at deep square-leg which initiated a collapse of epic proportions as Qalandars slipped from 86 for two to 100 for nine. Musa dismissed Ben Dunk on the last ball of the same over and got the prized scalp of Fakhar, who with 44 off 37 promised to anchor the chase, in his next over.

With the pressure mounting on Qalandars, Tim David, fresh from his match-defining 64 not out against Peshawar Zalmi, held out to deep midwicket off Shadab, who four balls later cleaned up Rashid Khan with a googly.

Haris Rauf promised a twist in the tale with two successive sixes off Mohammad Wasim Jnr but he was caught at deep midwicket by Iftikhar Ahmed in the penultimate over which ended Qalandars’ innings.

It was the 123-run alliance between Asif Ali, who posted his best HBL PSL score, and Iftikhar Ahmed that propelled Islamabad United to a respectable 152 for seven.

United had lost as many as five wickets for just 20 runs as Qalandars’ pacers once again provided their team a perfect start. Shaheen Shah Afridi’s scorching pace combined with lethal swing sent Usman Khawaja packing on the third ball.

A 125-run third wicket partnership off 73 balls between Kamran Akmal and David Miller set up a 61-run victory for Peshawar Zalmi over Quetta Gladiators that sent the 2019 champions packing from the PSL-6.

Recovering from 10 for two and then 22 for two after the power play overs, the 2017 champions finished at 197 for five with Miller clobbering six fours and four sixes in a 46-ball 73 and Kamran contributing a well-constructed 37-ball 59 with six fours and two sixes.

Quetta Gladiators, who were without Andre Russell, suffered a devastating blow when Faf du Plessis suffered a concussion in a freak fielding accident after colliding with Mohammad Hasnain. Without two star batters, the 198-run target was always a herculean task for the Gladiators, who hobbled to 136 for nine after being 62 for no loss in the eighth over.

The result meant Peshawar Zalmi moved to join Islamabad United on eight points from seven matches, while the defeat proved to be the end of the road for Quetta Gladiators who suffered their sixth loss in seven matches.

Meanwhile, du Plessis’s wife on Sunday took to social media to highlight her plight after she came to know about her husband’s injury.

In an emotional note, du Plessis’s wife Imari asked teams to institute a system for such emergencies as she felt helpless with little information about her husband coming through.

“As a wife and a mom I would like to ask that we start to honour the relationship of next of kin. That was my person who just got severely injured with thousands watching. He is my whole life, but in that moment I am only a spectator,” she wrote.

In a separate development, Islamabad United fast bowler Hasan Ali will miss the remainder of the PSL because of family commitments.

“I want to say to all Islamabad United fans, unfortunately due to personal reasons I have to pull out of the remaining PSL matches,” Hasan was quoted as saying in Islamabad’s statement. 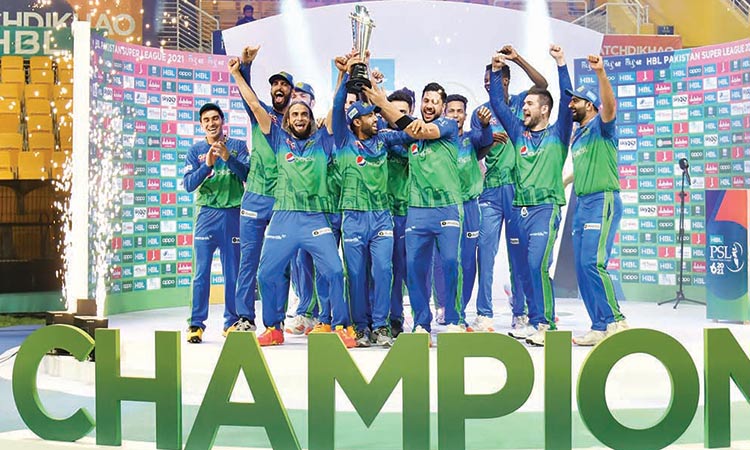 Pacer Shahnawaz Dahani dedicated his Pakistan Super League 2021 success to his mother and late father, after the Multan Sultans won the trophy and the fast bowler becoming the best bowler and best emerging player of the sixth edition of the tournament.