Wasim confident of United making it to play-offs - GulfToday

Wasim confident of United making it to play-offs 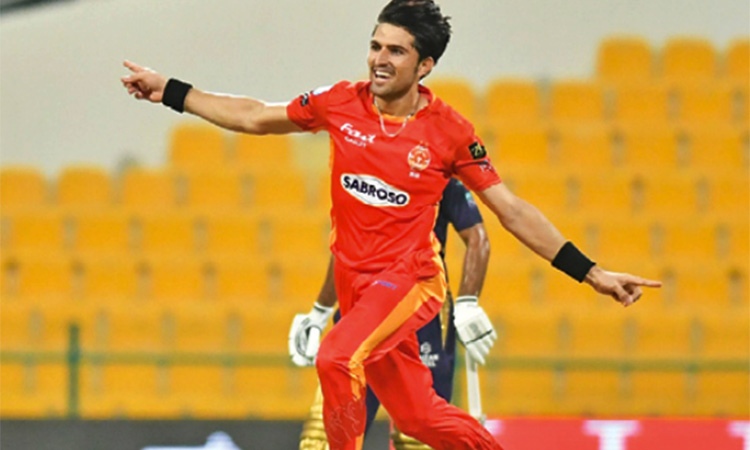 Colin Munro and Usman Khawaja shared an unbeaten 137-run partnership for the opening wicket as United chased down a target of 133 without losing any wickets in 10  overs only.

Wasim was impressive with the ball as he took two wickets, conceding only 12 runs from his four overs to help United restrict their opponents for a relatively easier target.

“First of all, I am thankful to Allah for this victory. This win will boost the morale of the team,” said Wasim.

“Our plan was to capitalise on the mistakes of the opponents and we did exactly the same,” he added.

With the victory, United have moved to the second spot in the standings, having procured eight points from six games with four wins and two losses.

Commenting on his journey since making his debut 18 months ago, Wasim said it has been a bumpy ride with a lot of hard work.

“It was a difficult journey. I have worked very hard to reach here. Coaches of all the teams I play for have worked on me to sharpen my skills.

“I learned a lot from the coach of my first class team. And when we went on tour with the national team, the coaching staff worked very hard,” he informed.

Wasim made his debut for Pakistan 18 months ago and plays for Khyber Pakhtunkhwa in the domestic circuit. Talking about his performance in the match, he said: “I am happy with my performance today. Sherry has charted out a plan for us and I am just sticking to it,” informed the lanky pacer.

Talking about his deadly and accurate yorkers, which has made the lives of the batsmen miserable in the tourney, he said: “The plans are simple in the first two overs, I have been told to maintain line and length. In the death overs when I come for a second spell I try to generate as much pace and deliver toe-breaking yorkers to unsettle batsmen,” he revealed.

“I am very happy to dismiss Faf du Plessis. He is a great batsman and it is a very satisfactory feeling to get the prize wicket of someone like him.

“I will try to continue the same performance and get his wicket again in the next match,” said an ecstatic Wasim.

“The atmosphere in the camp is very delightful and we are enjoying with Hasan and Sherry. We missed Fahim in today’s game but he will be back in the next match Insha Allah.

“We have moved to the second spot in the table and will try to keep the winning momentum going. We are confident of making it to the play-offs,” he apprised.

“It was disappointing to lose another game. Unfortunately we are in the worst of  conditions. We could have batted better tonight,” he said.

Gladiators are at the bottom of the standings with just two points from six games after one win and five losses.

Their hopes of qualifying for the play-offs are hanging by a thread.

“I think United batted beautifully and Colin was amazing. They are a world-class batting side. I hope I can click from here on and make runs like Colin did today,” he added.

“I am chilling out and spending some time with my family. It is my off season and I am thankful to Gladiators for giving me the opportunity to play here,” he concluded.

ICC and BCCI are in talks with Oman Cricket over hosting of some of the T20 World Cup matches later this year in the Gulf nation, a top Oman cricket official has confirmed.