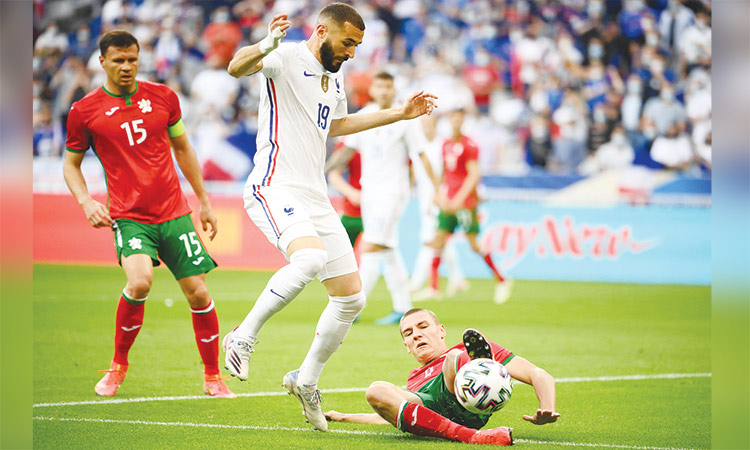 France’s Karim Benzema (left) fights for the ball with Bulgaria’s Valentin Antov during their friendly match on Tuesday. Agence France-Presse

Karim Benzema was forced to leave the pitch with a dead leg on Tuesday as world champions France beat Bulgaria 3-0 in their final friendly one week before beginning their Euro 2020 campaign.

Benzema was taken off in the 39th minute at the Stade De France in what is France’s last match before they take on Germany in their opening Group F match of the European Championship against Germany on June 15.

The 33-year-old had been recalled with great fanfare to the national team following a near six-year exile, but his replacement Olivier Giroud showed why Les Bleus are considered among the favourites for the tournament with a second-half brace.

Antoine Griezmann scored the opening goal in front of 5,000 joyous supporters who were also celebrating their return to live football in the stadium.

Charlene Lecuir was one of those fans lucky enough to get a ticket for Tuesday’s match, and told AFP she let out a “scream of joy” when she learned she would be attending.

Fans were allowed in if they had a negative test for Covid-19 within the previous 48 hours or proof they had been completely innoculated for the virus.

The fans were worried when, with France already ahead thanks to Griezmann, Benzema sat down in the middle of the pitch and was checked over by team doctors after having fallen heavily when attempting a header a few minutes earlier.

He then left the field, but France coach Didier Deschamps played down the injury, saying it was a “dead leg”.

“He took a good hit on the muscle above the knee,” France coach Didier Deschamps told broadcaster M6.

“He stopped playing because he felt it hardening... the medical staff are at his side.”

Benzema had been sidelined by Les Bleus since 2015 over his alleged role in a blackmail plot involving his former international teammate Mathieu Valbuena.

Benzema has scored 27 goals for France and was last month named as this season’s best French foreign-based player by the country’s players’ association. He scored 29 goals last season for Real Madrid, passing 20 league goals in all three seasons since Cristiano Ronaldo left for Juventus in 2018.

Euro 2020 outsiders Hungary were held to a 0-0 draw by a spirited Ireland in Budapest on Tuesday in their final friendly match before the tournament.

The tie extends the Magyars unbeaten streak to 11 games across all competitions, with their last defeat coming against Russia in the UEFA Nations League in September 2020.

Hungary enjoyed more possession throughout but, similar to their hard-earned 1-0 win against Cyprus last Friday, struggled to create chances against a well-organised Irish outfit.

Hungary’s blunt attacking edge will concern Italian coach Marco Rossi whose starting line-up was close to the side that will face a daunting challenge in Euro 2020 Group F.

Stephen Kenny’s Ireland, seeking to make it two friendly wins in a row after beating Andorra 4-1 last Friday, nearly went ahead after six minutes when Sheffield United defender John Egan slammed a header against the crossbar.

After settling, Hungary had the better of the first half but had to wait until just before the break to threaten an opener when captain Adam Szalai’s header forced a diving save from Gavin Bazanu.

Growing in confidence Ireland carved out more openings on the counter-attack in the second period, going close with a long-range strike by Norwich City’s Adam Idah that was pushed wide by substitute goalkeeper Adam Bogdan. Late on, burly Mainz striker Szalai almost broke the deadlock with close-range efforts that were tipped over by Bazanu’s replacement Liverpool’s Caoimhin Kelleher, while he curled another shot just wide.

The match was played in front of over 10,000 raucous home fans in the Szusza Ferenc stadium, with packed stands also expected at the Puskas Arena in Budapest, the only one of the 11 Euro 2020 stadia not to limit fan numbers.

The Magyars will be appearing at their second successive European Championships after reaching the last 16 round at Euro 2016. 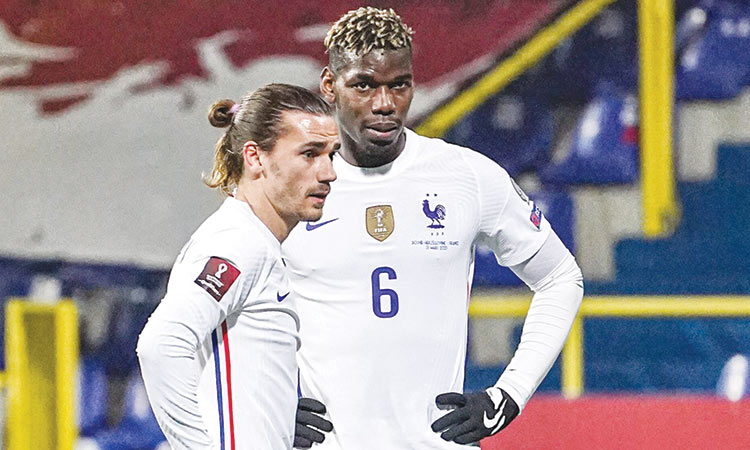 Didier Deschamps captained France to a World Cup and European Championship double as a player and is now hoping to repeat the feat as coach when the delayed Euro 2020 finally goes ahead in June and July. However the 52-year-old warned against any 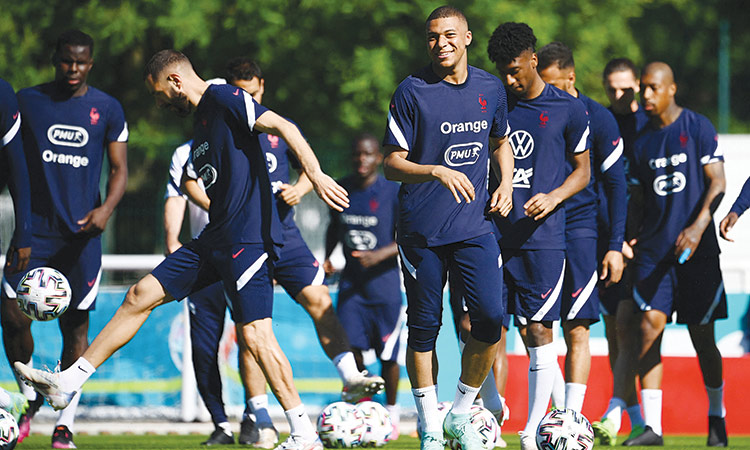 World champions France open their Euro 2020 campaign on Tuesday against an embattled Germany team eager to rediscover their best form in the first clash of two traditional European heavyweights in this year’s tournament. France and Germany usually play 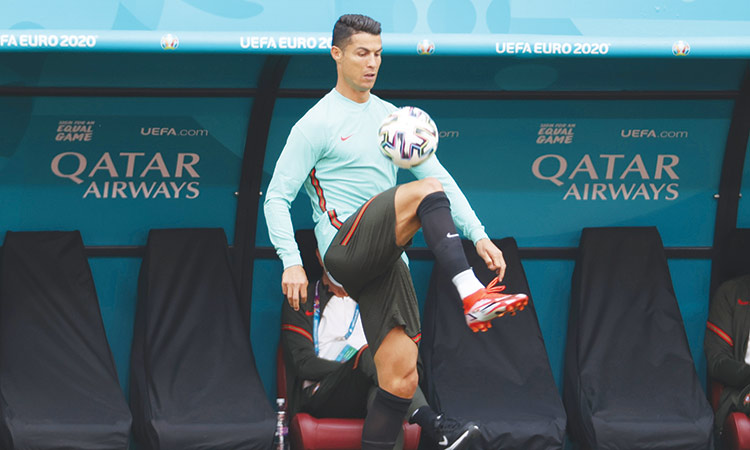