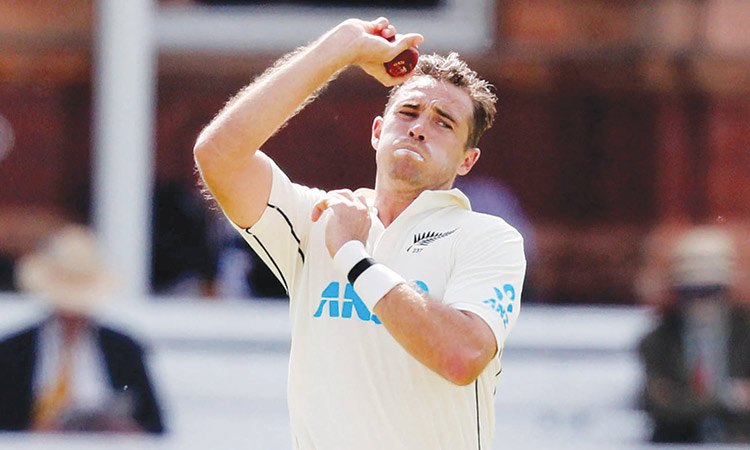 Tim Southee (left) and Kyle Jamieson picked four wickets each to rattle India in the first of the two-Test series in New Zealand. File

When India take field in World Test Championship (WTC) final from June 18, they will be up against a poor record versus New Zealand in major International Cricket Council (ICC) events stretching back to 18 years.

India’s seven-wicket win in the 2003 World Cup under Sourav Ganguly was the last time they beat the Kiwis in an ICC tournament.

Left-arm pace bowler Zaheer Khan took four wickets while off-spinner Harbhajan Singh took two as India skittled out Kiwis for 146 and won by seven wickets in Centurion 18 years ago. Since then India have lost every match to the Black Caps at ICC events.

2016 T20 WC match: Indians bowled tightly to restrict New Zealand to 126/7 in 20 overs on a pitch that helped spinners. Corey Anderson, with 34 off 42 balls, and Luke Ronchi (21 off 11) were the only noteworthy contributors for New Zealand. However, the visitors’ spin trio Nathan McCullum, Mitchell Santner and Ish Sodhi shared nine wickets to skittle out India for 79. The Kiwis won by 47 runs.

Leg-spinner Sodhi, who picked in-form Virat Kohli (23 off 27) as one of his three wickets, said on Youtube show The Grade Cricketer: “Nathan [Mccullum] bowled in the power play. He came up to us and said, ‘boys, there is a bit of fun to be had out here.

So just make sure you back your skills and try to spin as best as you can’. I bowled the first ball in the good area, it spun and caught the edge of Kohli’s bat and was taken by wicketkeeper Ronchi.”

2019, 50-over WC semi-final: This was one of the most disappointing losses for India. Having lost only to host England in the league stage and topping the league table with 15 points, the Virat Kohli-led team was favourite to win the tie that was played over two days due to inclement weather.

Pacer Bhuvneshwar picked three wickets for 43 runs to help India run through New Zealand’s late order preventing them from taking the total beyond 250.

India’s batting, however, fell apart when they batted on the second day (reserve day), losing first three wickets for five runs. At 24 for four, it looked game over but Ravindra Jadeja’s 77 off 59 balls took India to 221, 18 runs short.

The Kiwis made 348 with the help of 89 from skipper Kane Williamson. The 183-run lead proved too much for India as they lost seven wickets in second innings before they could clear the lead.  Only Mayank Agarwal could score a half century - 58 -- as Kohli’s boys were dismissed for 191.

India lost the second Test in Christchurch by seven wickets. Even though they put up a better first innings score (242) this time and took a seven-run lead thanks to Mohammed Shami’s four-wicket and Jasprit Bumrah’s three-wicket hauls, they were crushed in the match.

The batting crumbled for 124 in second innings against the pace of Tim Southee (3/36) and Trent Boult (4/28). The 132-run target proved to be a cakewalk for the Kiwis.