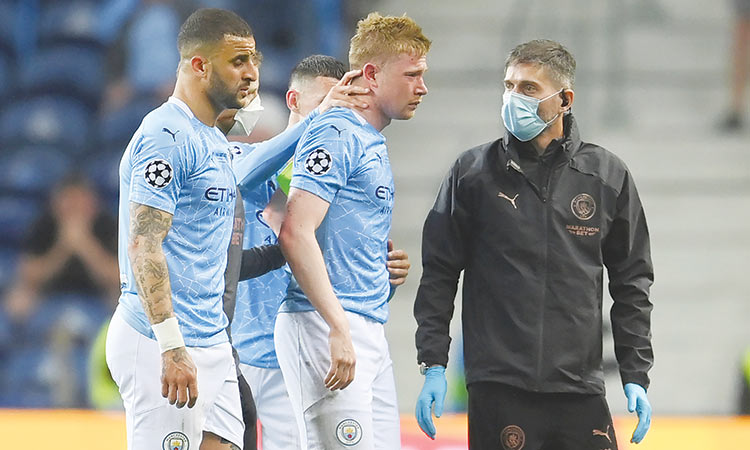 Kevin De Bruyne does not require surgery after fracturing his nose and eye socket and will join the Belgium squad next week ahead of the European Championship. File

With their golden generation of players scattered throughout Europe’s biggest clubs, Belgium have all they need to finally land the major soccer title they crave.

On paper, at least, because the form of some of the players on the top-ranked FIFA team raises a big question mark on their ability to go deep at this year’s European Championship.

In the wake of their third-place finish at the 2018 World Cup, Belgium coach Roberto Martinez’s players breezed through their Euro 2020 qualifying campaign with a perfect record of 10 wins -- with 40 goals scored and only three conceded.

But that was more than a year ago, before the tournament was pushed back by a year because of the coronavirus pandemic.

Things have changed, and Belgium will start the competition with captain Eden Hazard struggling with form and confidence, the experienced Axel Witsel only recently back from a long absence, and Manchester City playmaker Kevin De Bruyne fracturing his nose and eye socket in the Champions League final loss to Chelsea.

De Bruyne does not require surgery after fracturing his nose and eye socket and will join the Belgium squad next week ahead of the European Championship.

Hazard, who had surgery on his ankle last year and has been underachieving with Real Madrid since joining from Chelsea, has not played with the national team in 18 months. More recently, following a forgettable display in the Champions League semifinals against his former club, he was mainly used as a substitute by then-Madrid coach Zinedine Zidane.

Despite his poor showings, Martinez included Hazard in his 26-man squad for the tournament, hoping he will get his form back at the right time.

“I think the medical condition is the best moment Eden had for a long, long time,” Martinez said.

“The level of fitness is really satisfactory. And from that point we always look back on how important Eden Hazard is for the national team. He is our captain and the way that he performs in our environment is essential, and is vital.”

Back in January, it seemed almost certain that Witsel would miss the tournament after undergoing surgery on an Achilles tendon injury.

Martinez, however, made the most of UEFA’s decision to increase squad lists from 23 players to 26, including the Borussia Dortmund winger in his selection. Martinez hopes Witsel will be fully fit for the knockout phase of the tournament, even if he misses early matches.

Belgium has been placed in what appears to be a relatively easy group alongside Denmark, Russia and Finland and is expected to progress without too much trouble.

Martinez took a similar risk with defender Vincent Kompany back in 2018, taking him to Russia even though he had not fully recovered from an injury. Kompany missed the start of the competition but featured in five of Belgium’s seven matches as the Red Devils advanced to the semifinals before losing to eventual champion France.

Martinez said Witsel needs some more time to be ready but insists he feels “very confident that he could have a big role” during the tournament.

De Bruyne has been in stellar form with City throughout the year, leading the Manchester club to the Premier League title and the Champions League final.

The injury on Saturday, however, has cast doubt on his ability to recover enough, especially with less than two weeks to rest before Belgium’s opening game against Russia on June 12.

But with a solid defense and so many attacking riches at his disposal, Martinez can expect his experienced team to deliver. After all, striker Romelu Lukaku is in excellent form, and so is Youri Tielemans - he scored a superb long-range goal to win the FA Cup for Leicester - while the less-known but consistent Jeremy Doku and Leandro Trossard add depth to the bench.