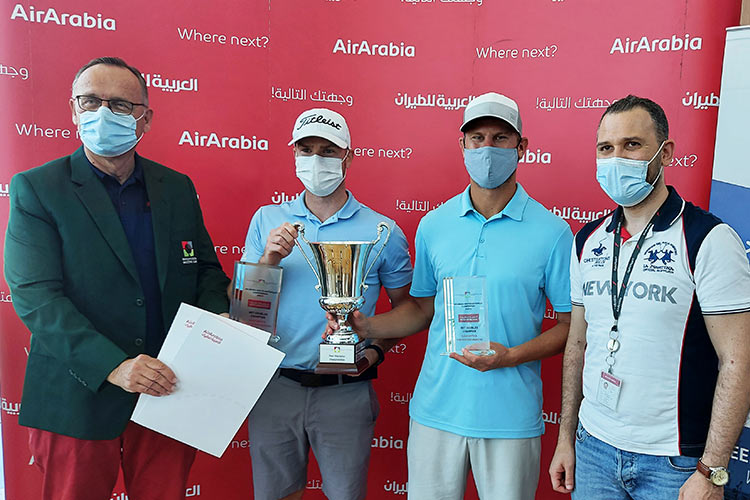 Winners of the Air Arabia Matchplay doubles pose for a picture.

The season ending Air Arabia Matchplay awards were presented at Sharjah Golf and Shooting Club with all the net and gross titles were given to the winners and the runners-up.

In the net categories prizes singles champion went to Adhip Shankar and this years’ runner-up was Shaheen Butt whilst Bagge was in third place. The pairs’ event went to the strong pairing of Adam Smith and Christopher Andrews beating Amir Inam and Abdul Moiz Khan in the final. Ali Mansour and Bagge also collected their third place trophy.

All the season's winners and runners up received trophies from Golf Club Captain Hans Ettengruber and Obadah Arwani Air Arabia area manager – UAE. SGSC Director of Golf Sam McLaren thanked Air Arabia who are founder sponsors of the event having supported all of the events to date.

Some great matches took place throughout the season with several matches being decided on the final hole, as always every game was played in great spirit.

Meanwhile, Sharjah Golf and Shooting Club and club captain Ettengruber hosted the ninth Captains Day. Hans put up some fantastic prizes and a full field all battled it out to finish top of the pile on the day.

There were some great scores recorded on the day, players also had lots of fun on course prizes to compete for. It was Boung Kwon You, who continued his rich vein of form posting a brilliant stableford score of forty points. You’s round included an incredible three net eagles and three net birdies as he guided his way to victory. In second place, just missing top spot was Gary Hibbert whose excellent round of thirty-nine points saw him fall just one point short of top spot. Third place went to past SGSC captain Mukti Rai who had a very steady round of golf posting a score of thirty-eight stableford points.

Best Gross went to low handicapper Cian Hart, Cians brilliant gross score of five under par saw him also post a score of forty-one points. Cian played brilliantly all day with a round that did not include a bogey.

Jamie Camero took home runners up spot with another fine performance of thirty-nine points. Thirty- one points was enough for Sami Butt to take home the spoils for third place. Finally, Martin Duffs score of thirty-four points saw him claim captain Ettengrubers guests division after an impressive round of golf.