Kristoff storms to second in Mallorca 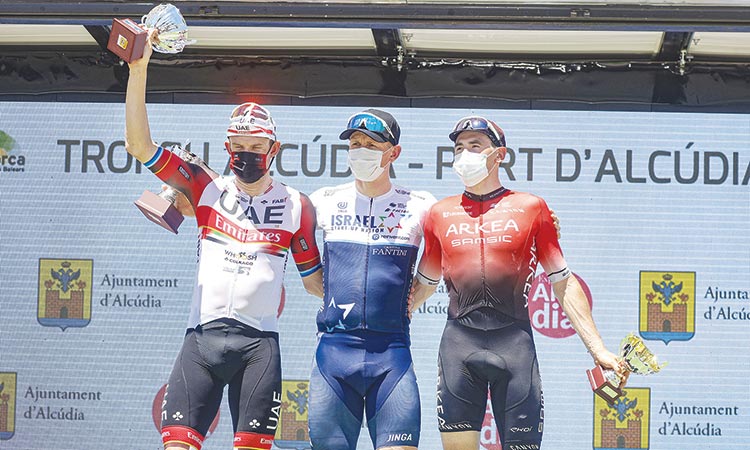 Team Emirates’ Alexander Kristoff celebrates on the podium, next to Andre Greipel after the last race of the Challenge Mallorca on Sunday.

UAE Team Emirates’ Alexander Kristoff came within touching distance of victory after Andre Greipel of Israel Start-Up Nation at the Trofeo Alcudia-Port d’Alcudia (1.1) on Sunday, coming in second place to wrap up a very successful week of racing at the Challenge Mallorca.

Kristoff: “It was a good race and I felt strong. The team did a good job to control the attacks from the start and not let any big groups go away.

I was in a decent position for the sprint but in the final I just couldn’t get around Greipel. It’s been a long week here in Mallorca with some very good results so we’re heading to the next races satisfied. I’m confident that my shape is going the right way and I’m motivated for the next races.”

The podium place of Kristoff concludes an eventful week which saw a victory on the opening day for Ryan Gibbons in the Trofeo Calvia (1.1), second place for Vegard Stake Laengen at the Trofeo Andratx – Mirador des Colomer (1.1) and fifth for Kristoff at the Trofeo Serra de Tramuntana (1.1).

Greipel has a huge haul of victories in the biggest races on the world stage but winning the final race in the Challenge Mallorca series could well count as among the most significant for the veteran German.

The 38-year-old, who at times has delivered a double-digit yearly win tally, has gone more than two years since tasting victory, with 2020 the only year in his professional career without a single win to his name, according to cyclingnews.

That dry spell for the rider, who still leads the active rider victory ranking, came to an end at the 169.8 kilometre Trofeo Alcudia when Greipel tore across the line in front of Kristoff and Christophe Noppe (Arkea-Samsic).

The joy of winning was clear, both in a video interview after the race and Greipel’s instagram post, which read: “Don’t you ever give up … thanks for the support boys.”

Greipel had come painstakingly close to victory at the Tour of Turkey last month, with two second places and one of them with just centimetres in it. The chance to turn around the near misses came at the Port d’Alcudia finish line, with the break pulled back in and the bunch together for the sprint.

“The last two years weren’t the easiest of my career,” Greipel admitted. “But in that time I still enjoyed riding my bike. It has always ben my passion to ride my bike.”

“I really enjoy riding my bike,” the sprinter said. “It’s fun for me. Racing is just something I really like to do.”

Earlier, Team Emirates’ Ryan Gibbons boosted the squad’s morale by clinching victory at Trofeo Calvia, part of the four-day Challenge Mallorca series on the first day of the race.

Gibbons put in a heroic effort with a long-range attack that ended with him holding on to win a two-man sprint after 168.7km in the saddle.

In what was a tough day featuring 3,400 metres of climbing, Gibbons set out on the attack with 70km to go in a group of seven riders, which was whittled down to just two, with Anthony Delaplace (Arkea-Samsic) the other member of the remaining breakaway.

The African Continental Champion outpaced the Frenchman in the final dash to the line, lifting his arms in celebration, with the main group a further 41’’ behind the pair.

Gibbons: “I’m really thrilled with this victory. I started the race very aggressively and made sure I got in the move along with Sven Erik Bystrom who was also attacking all day. After about 70-80km I slipped away in a group of seven riders and then two of us.” 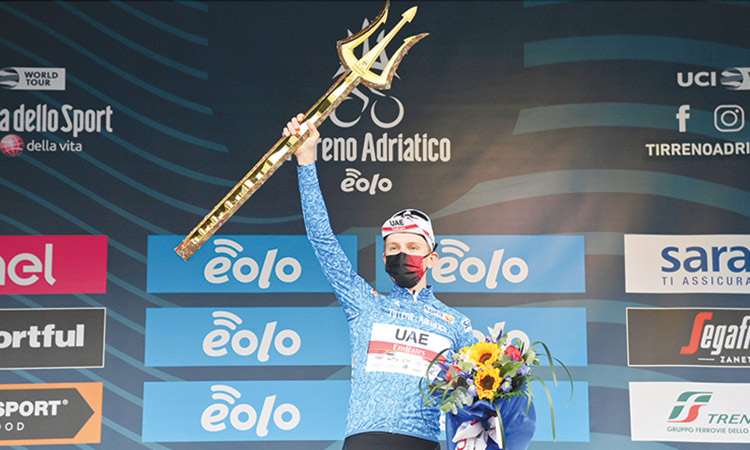 UAE Team Emirates’ Tadej Pogacar won the Tirreno-Adriatico on Tuesday after the seventh and final stage of the ‘Race of the Two Seas’, claiming his second overall victory of the year after winning the UAE Tour last month.