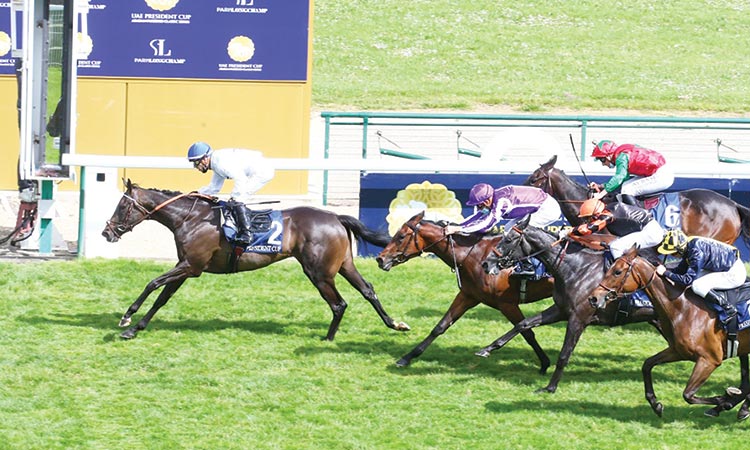 Loritz Mendizabal rides Hattal towards the finish line to win the UAE President’s Cup World Series for Purebred Arabian Horses at the Paris Longchamp Racecourse in France on Sunday.

The UAE’s world series was held as part of the146th running of the historical and coveted Preakness Stakes.

Held under the patronage of President His Highness Sheikh Khalifa Bin Zayed Al Nahyan, with the support of His Highness Sheikh Mohamed Bin Zayed Al Nahyan, Crown Prince of Abu Dhabi and Deputy Supreme Commander of the UAE Armed Forces, and the directives of Sheikh Mansour, the series promotes the UAE’s efforts to promote global awareness about purebred Arabian horses and their significance in the UAE’s culture and history.

The US hosted the first race on the world series’ 2021 agenda, which was expanded to include races across 15 countries around the world, including the UAE, Tunisia and Argentina.

The UAE has become a dedicated supporter of its mission to promote the culture and heritage of the Arabian Peninsula through its prized possession, the purebred Arabian horse.

The Emirates Equestrian Federation launched the President of the UAE Cup Series for Purebred Arabian Horses in 1994 to promote the noble breed globally, which is now growing in popularity and appeal.

Established by the late Sheikh Zayed Bin Sultan Al Nahyan to promote and celebrate Arabian horses, especially in Europe and North America, and to prove that they can race competitively with thoroughbred horses, the UAE President’s Cup Series is the first international race series for Arabian horses and remains the premier race for the breed.

Master Of The Seas out of Royal Ascot: Meanwhile, Master Of The Seas, last seen finishing a very close second in the G1 2,000 Guineas, has unfortunately suffered a setback after training and will miss Ascot’s Royal meeting.

Charlie Appleby’s charge was beaten just a short head by Poetic Flare in the 2000 Guineas at the start of May, having lifted the Craven Stakes on his prep run for the Classic in April, Racing TV reported.

The Dubawi colt had been as short as 4-1 for the St James’s Palace Stakes at the Royal meeting on June 15, but he is now set for a short spell on the sidelines.

Godolphin tweeted: “2000 Guineas runner up Master Of The Seas unfortunately had a setback after training on Saturday and will now be on the easy list for two to four weeks, meaning he will miss Royal Ascot.”

Trainer Charlie Appleby said, “Master Of The Seas pulled up slightly lame after working on Saturday and after further investigation, he was found to have strained a joint.

“He will now be on the easy list for the next two to four weeks. We will then look at potential future engagements, which could include Goodwood.”

The Guineas form suffered an early jolt at the weekend when Poetic Flare could finish only sixth in the French 2000 Guineas.

The Cazoo Derby entry finished third in the Dante after a planned outing in the Lingfield Derby Trial was scuppered by an unsatisfactory blood test as reported by Racing TV.

High Definition, who won each of his two juvenile starts, came from off the pace on the Knavesmire, and O’Brien felt the way the race unfolded was possibly not ideal for his charge.

He said: “High Definition is in good form. He hasn’t done much since York.”