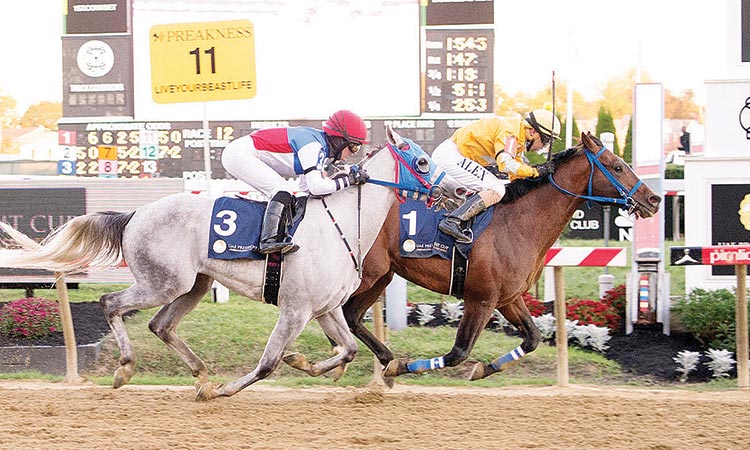 The UAE’s world series will be held as part of the146th running of the historical and coveted Preakness Stakes. WAM

The 28th edition of the UAE President’s Cup World Series for Purebred Arabian Horses is set to kick off on Saturday at Pimlico Race Course in Baltimore, Maryland, US.

The 1,700-metre Group 1, the first race of the series, will feature a field of 12 strong US Arabian fillies and mares, aged four years and above, competing to win $100,000 worth of prizes.

The UAE’s world series will be held as part of the146th running of the historical and coveted Preakness Stakes.

The second round will take place on Sunday at the Paris Longchamp Racecourse in France.

The series promotes the UAE’s efforts to promote global awareness about purebred Arabian horses and their significance in the UAE’s culture and history.

The UAE has become a dedicated supporter of its mission to promote the culture and heritage of the Arabian Peninsula through its prized possession, the purebred Arabian horse.

The Emirates Equestrian Federation launched the President of the UAE Cup Series for Purebred Arabian Horses in 1994 to promote the noble breed globally, which is now growing in popularity and appeal.

Established by the late Sheikh Zayed bin Sultan Al Nahyan to promote and celebrate Arabian horses, especially in Europe and North America, and to prove that they can race competitively with thoroughbred horses, the UAE President’s Cup Series is the first international race series for Arabian horses and remains the premier race for the breed.

Meanwhile, unbeaten colt Hurricane Lane secured his place in this year’s Derby with an impressive display in the G2 Dante Stakes at York on Thursday.

The Charlie Appleby-trained three-year-old, making his Pattern-race debut on the back of a comfortable win in a Newbury conditions race, broke on terms and soon disputed second as Roman Empire strode on into an uncontested lead.

Roman Empire kicked on at the top of the straight and opened up a six-length advantage passing the two-furlong pole before fading as Hurricane Lane and Megallan moved up to challenge entering the final furlong.

Hurricane Lane continued to stay on powerfully for William Buick, establishing a narrow lead over Megallan half a furlong from home before asserting in the closing stages for a three-quarter length success in the extended 10-furlong contest.

Charlie Appleby said: “We are delighted with Hurricane Lane, who has travelled and stayed well. He has galloped through the line strongly today and shown plenty of stamina, so he hopefully ticks a lot of boxes for the Derby.

“I have spoken to His Highness Sheikh Mohammed Bin Rashid Al Maktoum, Vice President and Prime Minister of the UAE and Ruler of Dubai, and he was also pleased. Provided Hurricane Lane comes out this race fit and well, the Derby is the obvious next target.”

William Buick said: “I was very pleased with Hurricane Lane. This is usually the most important trial and it’s not very often that you get a G1 winner like Gear Up in the race. It looked like a strong renewal and this race normally throws up a very live Derby candidate.

“It was only Hurricane Lane’s third run, so he is still learning on the job. He jumped out and we got ourselves a nice position where I could leave him alone and build him up how I wanted to.

“For a trial, it was a truly run race – I guess the first half might have been a bit steady – but this horse will benefit from a mile and a half. He has a lovely attitude and has shown in his last two runs how he loves nothing more than a battle on his hands. He goes through the gears in his own time but does it quickly and answers every call.

“He will hopefully go to the Derby with good credentials. He has done nothing but improve and has come out of this important test with flying colours. He is learning on the job but has done everything a little bit smoother and a little bit quicker each time he has run.”