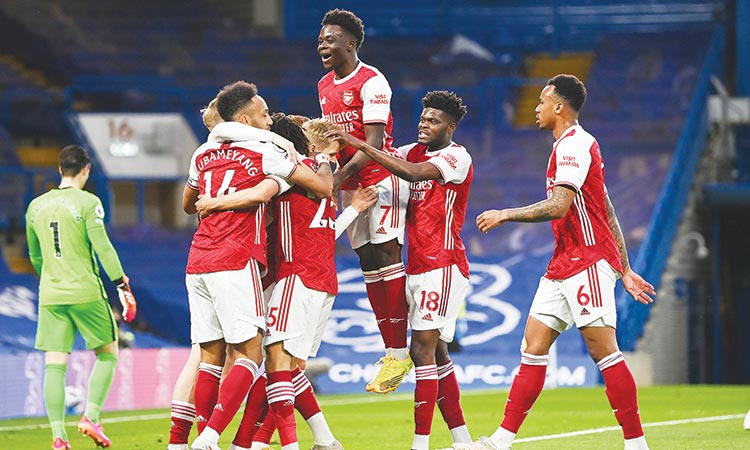 Arsenal’s Emile Smith Rowe (left) celebrates with his team-mates after scoring a goal against Chelsea during their EPL match on Wednesday. Agence France-Prsese

Thomas Tuchel said Chelsea face a ‘big fight’ to finish in the Premier League’s top four after their damaging 1-0 defeat against Arsenal on Wednesday.

Tuchel’s side missed a chance to climb above Leicester into third place as Emile Smith Rowe bagged the first half winner at Stamford Bridge.

Smith Rowe punished a wayward back-pass from Jorginho to leave Tuchel anticipating a tense finish in the race to qualify for next season’s Champions League.

Fourth placed Chelsea are six points ahead of fifth placed West Ham, who have a game in hand, and seven in front of sixth placed Liverpool, who have two games in hand.

Chelsea have two league matches remaining against Leicester and Aston Villa and Tuchel said: “It was always a big fight, it never felt like a relief.

“If anybody felt it like this today, maybe, it’s the last lesson to learn.

“It’s still in our hands. It is another chance missed. We have had some good results, so we have to cope now with a loss.”

Tuchel conceded he was to blame for Chelsea’s first defeat in eight games in all competitions after he made seven changes from Saturday’s win at Manchester City.

“Maybe I gave some signals to the team with changes that Saturday is on my mind,” Tuchel said in reference this weekend’s FA Cup final against Leicester.

“Even if it’s one per cent or five per cent, this is not how we approach things, because you get punished. It’s hard to swallow, hard to accept, but there’s no other way.”

Arsenal boss Mikel Arteta admitted the Gunners’ first Stamford Bridge win in a decade was much-needed after a difficult period.

Arteta has been under-fire during a troubled campaign, but he insisted his side have not given up hope of qualifying for Europe next term.

They could make the new Europa Conference League and have an outside chance of reaching the Europa League.

“Nothing is broken inside. I don’t know how they want to try from the outside. They (the media) try to put things on me that I never said,” Arteta said.

“I said if I don’t get 120 percent off each player it’s my fault and responsibility. It wasn’t like this in the press. I’m so annoyed by that.

“They can try but they’re not going to break it. The players showed how much they mean it, how much spirit and attitude there is in the group, and how much they care about it.

“It was a big message. Europe is still mathematically possible, so we have to keep giving ourselves the last chance while it’s possible.”

Meanwhile, Liverpool manager Jurgen Klopp has played down talk of a summer spending spree in a bid to revive the Anfield club’s fortunes.

The German boss believes it will be a relatively quiet transfer window despite speculation linking Erling Haaland, Kylian Mbappe and Jadon Sancho with big-money moves.

But, with clubs across Europe still counting the cost of the coronavirus pandemic on their finances as a result of having to play behind closed doors, the continent’s leading teams have a lot less spending money than in previous years.

Liverpool’s finances could be stretched even further if the Merseysiders fail to qualify for the Champions League, with Klopp adamant he will not spend heavily after his side ceded the Premier League title to Manchester City.

Klopp believes many teams won’t move into the transfer window until after Euro 2022, saying: “The market will be really strange.

“I hear about really big money moves... is Kylian Mbappe going? Haaland? Sancho? I don’t see that happening a lot this summer because the football world is still not in the same place it was before.

“We will see how the market will develop but for sure it won’t be an early market.”

Klopp, pointing out Liverpool had won the Champions League and Premier League during his time at Anfield, said: “I never look at other clubs and think ‘They can do this, so we can’t do that’. 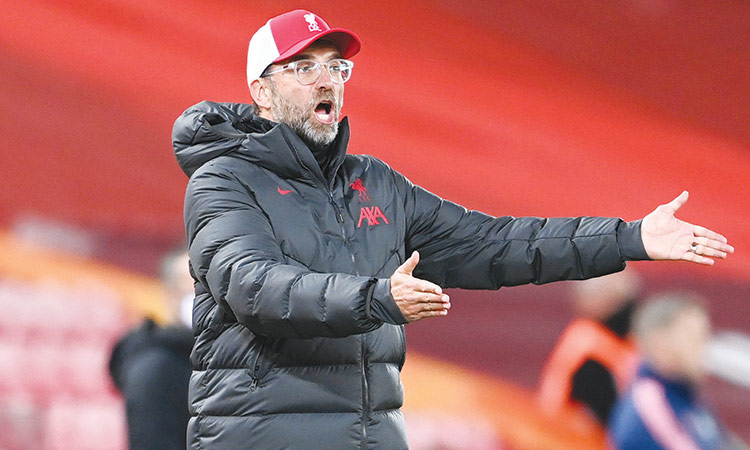