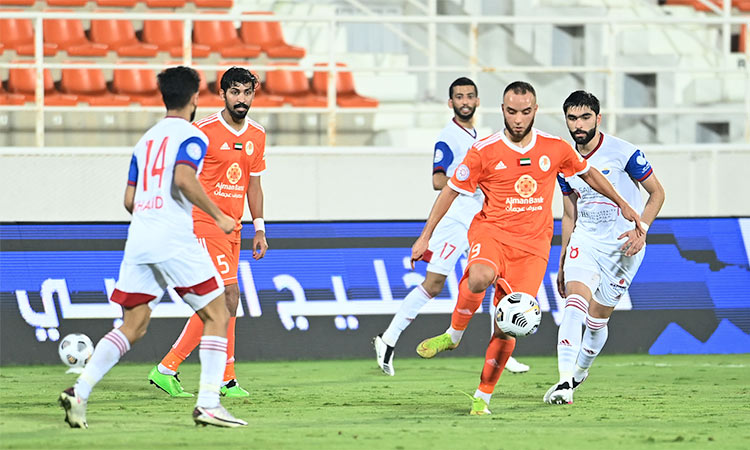 Sharjah and Ajman players in action during their Arabian Gulf League match.

Al Jazira maintained their grip at the top of the Arabian Gulf League (AGL) table with a 2-0 win over Al Ain in a penultimate round match on Friday.

Ali Mabkhout opened the scoring for the home side on 33 minutes to hand Al Jazira a 1-0 lead into halftime.

Al Ain had a golden opportunity to level the scoreline when they were awarded a penalty in the 78th minute but Kodjo Laba’s strike was saved by keeper Ali Khaseif.

With only 10 minutes to go, Milos Kosanovic fired home a free-kick to guide Al Jazira to a 2-0 win. Al Jazira top the standings with 54 points, only one above second-placed Bani Yas. Meanwhile, Al Ain remain sixth with 38 points.

Bani Yas dominated from the start to finish at Hamdan Bin Zayed Stadium as they romped to a 5-0 victory against Al Dhafra on Friday as the title race will now go down to the last day of the season.  Bani Yas were already 3-0 up 18 minutes into the game, thanks to goals from Joao Pedro, Gastón Suarez, and Amer Abdulrahman.

Pedro broke the deadlock in the 12th minute and Suarez doubled their lead three minutes later from a freekick before Abdulrahman headed home the third goal in the 18th minute.

The guests started the second half in a similar fashion and needed just seven minutes to score the fourth goal, courtesy of Nicolas Gimenez. Ahmed Abunamous made it 5-0 four minutes from time to seal a comfortable victory for Bani Yas.

The win left Bani Yas in second place with 53 points, only one below leaders Al Jazira who claimed a 2-0 win over Al Ain, as the tight title race will now be decided on the last matchweek of the season.

Sharjah tightened their grip on third spot in the Arabian Gulf League (AGL) with a 3-0 win over Ajman at Rashid Bin Saeed Stadium on Friday.

After a goalless first half, Abdulrahman Rakan netted an own goal to put Sharjah 1-0 up on the one-hour mark. The hosts’ misery was compounded when they were forced to continue the game with 10 men after Waleed Abdulla was sent off seven minutes later.

Super sub Igor Coronado netted two quick-fire goals, as he scored off a free-kick in the 72nd minute before further extending Sharjah’s lead with another strike three minutes later.

The win saw Sharjah cement their third place, as they now have 48 points. Meanwhile, Ajman dropped crucial points in the battle for survival as they are tied with relegation contenders Fujairah, who still have a game in hand, on 15 points.

Al Wahda came from behind to play out a 2-2 draw with Al Nasr at Shabab Al Ahli Stadium.

Al Nasr took the lead in the 35th minute thanks to Fares Jumaa’s own goal and Sebastian Tagliabue capitalised on an error from keeper Mohamed Al Shamsi to double their lead. Omar Khribin halved the deficit on the stroke of halftime, as they headed into the break trailing 2-1.

Substitute Tim Matavz scored the equaliser 10 minutes from time to snatch a point for Al Wahda.  The draw saw Al Nasr drop to fifth place with 46 points, 10 clear of Al Wahda, who sit eighth and still have a game in hand.

Yousef Jaber broke the deadlock only 12 minutes into the game. Carlos Eduardo doubled the hosts’ lead on the half-hour mark before Harib Suhail made it 3-0 eight minutes later.

To add insult to injury, Al Wasl were reduced to 10 men five minutes before the break when Abdelrahman Saleh was sent off for a second booking.The win left Shabab Al Ahli in fourth place with 47 points. Meanwhile, Al Wasl are ninth with 34 points.

Fujairah were held to a 0-0 draw by Khorfakkan at Saqr Bin Mohammad al Qassimi Stadium. Fujairah had the upper hand in the first half yet failed to find the back of Khorfakkan’s net.

The most dangerous chance of the first 45 minutes fell to Firas Ben Larbi, whose 22nd-minute powerful effort went just above the bar.

An effort from Khorfakkan’s Arthur dos Santos hit the woodwork just eight minutes after the restart. Firas Ben Larbi and Muftau Owolabi then missed chances to break the deadlock after the one-hour mark.

The draw left Khorfakkan in 10th place with 25 points.

Meanwhile, Fujairah are now levelled with Ajman on 15 points, after the latter fell to a 3-0 defeat against Sharjah.

Both sides’ Arabian Gulf League status could be decided when they face off in the final matchweek before Fujairah face Al Wahda in a postponed game on May 15.