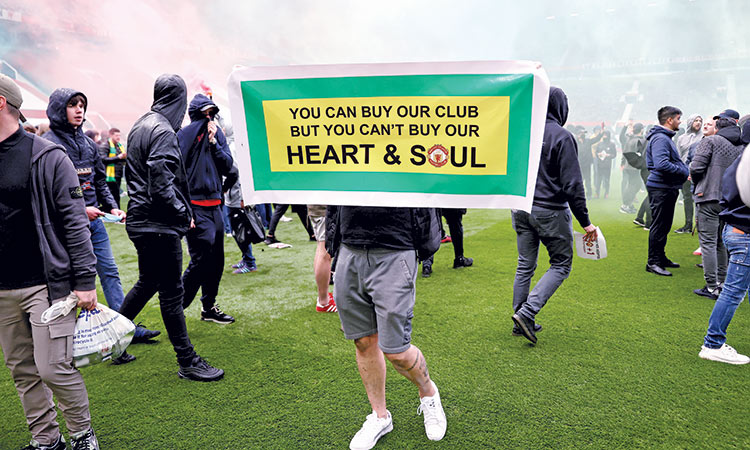 A Manchester United fan holding a banner on the pitch in protest against their owners before the match. File / Reuters

Manchester United’s game against Liverpool will be played on May 13 after being postponed because of protests by home fans at Old Trafford on Sunday.

They face Aston Villa away on Sunday and now has a home game against Leicester on Tuesday followed by the Liverpool game two days later. The Leicester game had originally been scheduled for Wednesday but was moved forward. United is second in the Premier League.

Sunday’s high-profile game against arch-rival Liverpool was postponed after a fan protest against the Glazer family — United’s American owners — turned violent with some supporters clashing with police and others invading the pitch inside Old Trafford.

Manchester United manager Ole Gunnar Solskjaer called on the team’s fans to be more “civilized” with their protests after violence marred a demonstration against the club’s American owners that forced the postponement of a Premier League match with Liverpool.

Acting again as United’s spokesman on Wednesday amid continuing silence by the Glazer family, Solskjaer defended the right of supporters to protest and accepted there needs to be better dialogue between the fans and United’s leadership to rebuild their frayed relationship.

Solskjaer, though, said things went too far on the concourse outside Old Trafford on Sunday when baton-wielding police clashed with fans, some of whom managed to breach the biosecure perimeter of the stadium and get on the field ahead of the Liverpool game, causing it to be postponed. Six police officers were injured, with one sustaining a fractured eye socket and another a facial wound after glass bottles were thrown.

“We have to listen, we have to hear the fans’ voices,” Solskjaer said. “It’s everyone’s right, but it has to be in a civilized manner, though, a peaceful manner.

“Unfortunately when you break in, when police officers get injured and scarred for life, that’s too far. And when it gets out of hand like this, it is a police matter. It’s not about showing your opinions anymore.”

Angry at the Glazer family’s involvement in a plan to set up a breakaway European Super League, the protesters have renewed their demands that the owners sell United. There has been long-held fan disgruntlement at the debt that has been loaded onto the club following the 2005 takeover by the Glazers, costing United more than 1 billion pounds ($1.4 billion) in 16 years along with dividends to the owners.

Co-owner Joel Glazer said in an open letter to fans he was “committed to rebuilding trust with our fans” and Solskjaer said work has started behind the scenes to open some dialogue.

“You don’t need to be a rocket scientist to see we have challenges and frictions and things that have to be dealt with, with communication,” Solskjaer said. “Other individuals than me have started already - we have discussed with the fans, we are communicating with fan groups, which is going to be massive for us going forward.”

“They have all accepted it came out wrong and was the wrong thing to do,” Solskjaer added about the Super League scheme, “which is a start. Let’s continue.”

United is waiting to discover if the club will be punished for the game getting postponed. A new date for the fixture has yet to be set.

which was seen as threat to the prestigious Champions League.

But the plan did not augur well with the other clubs, fans and federations including UEFA. All the bodies and machinery jumped into action and the league was razed down even before it could begin. All the participating clubs had to retreat with plans shelved.

The rebellion clubs were facing a ban also. UEFA president Aleksander Ceferin had refused to rule out a ban from next season’s Champions League for all 12 clubs involved in trying to set up a breakaway European Super League.

But Ceferin also told Britain’s Mail that the six English clubs -- Chelsea, Manchester City, Arsenal, Tottenham, Liverpool and Manchester United -- deserve greater leniency as they were the first to back out. 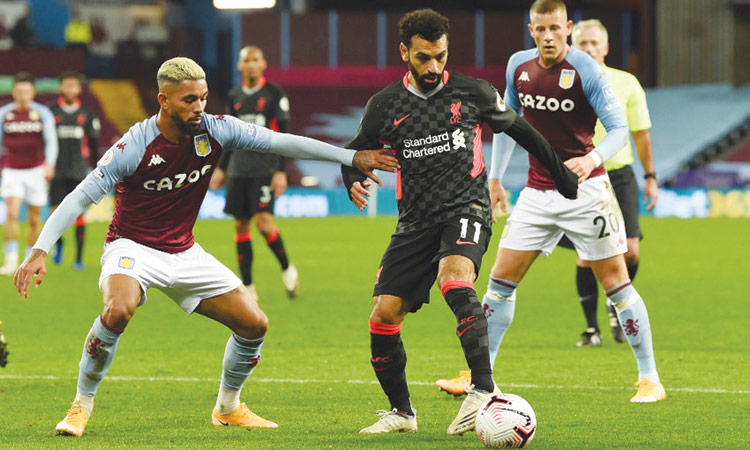 Premier League chiefs have called for unity after leading clubs discussed a “damaging” overhaul that would trigger the most radical changes to English football in decades. 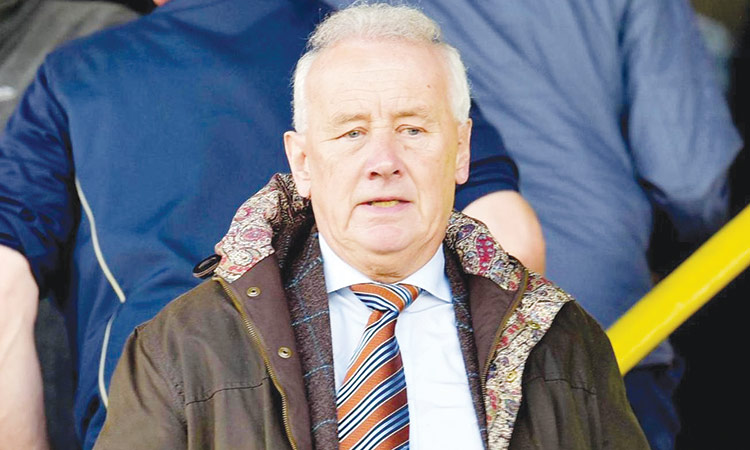 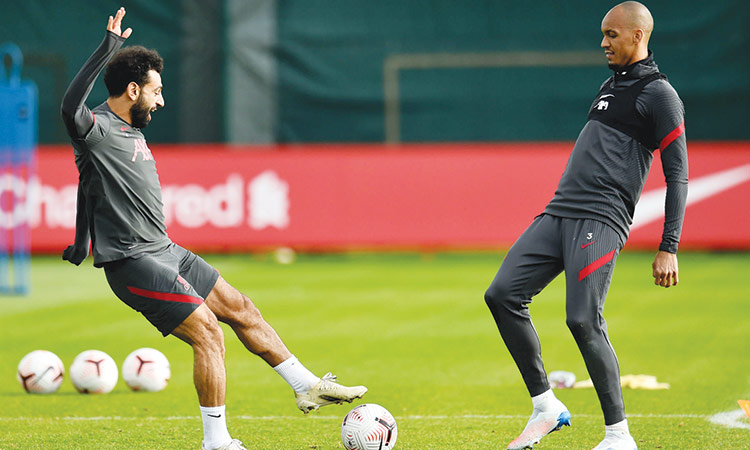 Liverpool face Premier League pacesetters Everton this weekend determined to prove their 7-2 drubbing by Aston Villa was just a bizarre blip while misfiring Manchester United could slip into the relegation zone.