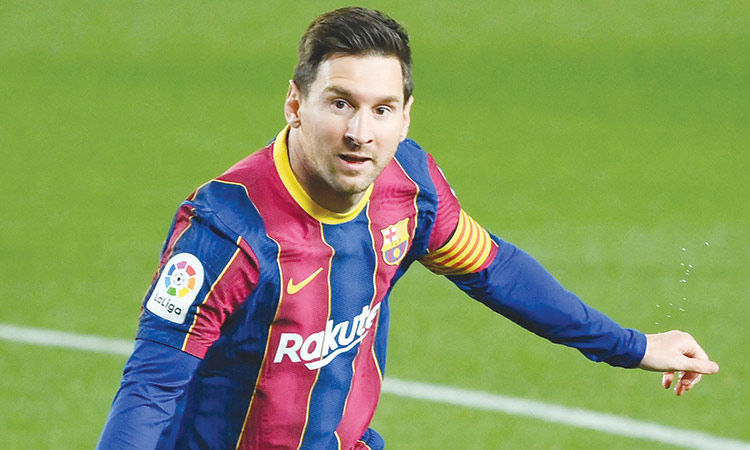 Barcelona’s Lionel Messi celebrates after scoring a goal against Getafe during their Spanish League match on Thursday. Agence France-Presse

Lionel Messi gave up the chance for a hat-trick on Thursday as Barcelona held off a late fightback from Getafe to win 5-2 and stay in the race at the top of La Liga.

Messi scored twice and could have had a third in injury-time at Camp Nou but deferred a penalty to Antoine Griezmann, who completed what was in the end a comfortable victory.

“He’s the best in the world, he never lets up,” said Barca coach Ronald Koeman.

“If he lowers his concentration you never notice. Hopefully he stays for many more years.”

After beating Athletic Bilbao to lift the Copa del Rey last weekend, Barca are now in the hunt for the double, sitting five points behind Atletico Madrid but still with a game in hand.

Atletico had earlier brushed aside Huesca 2-0 to register back-to-back victories for the first time since January and with Real Madrid also seeing off Cadiz on Wednesday, there is no margin for error now in a thrilling battle for the title.

None of Spain’s leading trio appear to have been affected by an incredible few days off the pitch, which saw Real Madrid, Atletico and Barcelona all sign up for the hugely controversial European Super League on Sunday.

Atletico withdrew from the breakaway competition on Wednesday but Barca and and Real Madrid remain part of a project that would transform the fabric of European football.

Getafe were wearing t-shirts in protest against the European Super League, even as they gave Barcelona a guard of honour to mark the Catalans’ cup success.

Messi now has 33 goals in all competitions and 25 in the league, one more than the total scored by the whole Getafe team.

Getafe are not safe yet, four points the gap above the bottom three.

Messi got to work in the eighth minute, slid through by a piercing pass by Sergio Busquets and sending a shot into the far top corner, despite a touch by Getafe goalkeeper David Soria.

Yet Getafe were level four minutes later as Angel met Marc Cucurella’s cross and the ball cannoned off the unsuspecting Clement Lenglet and flew in.

Another own-goal restored Barca’s lead, this one more avoidable, with Sofian Chakla failing to spot Soria coming out before passing the ball beyond the goalkeeper and into his own net.

The game looked secure when Messi made it three. Lenglet’s looping header gave him the chance to volley left-footed against the far post but the ball arrowed back to the striker, who finished from the angle with his right.

Getafe teed up a nervy last 20 minutes when Ronald Araujo, on as a substitute, trod on the ankle of Enes Unal, who scored the penalty to give the visitors hope.

But Barcelona pulled away with two late goals, Araujo heading in a corner from Messi, who then passed up the chance to score his third by giving Griezmann his first.

Atletico Madrid had earlier moved back to the top of the table thanks to goals from Angel Correa and Yannick Carrasco.

After managing only four wins in 13 games in all competitions, Atleti have now struck two in two, following up last weekend’s thrashing of Eibar to suggest their slump may be over.

With Luis Suarez out injured, Correa has filled the void. He scored twice against Eibar on Sunday and put Atletico ahead again after 39 minutes.

Koke freed Kieran Trippier down the right before Marcos Llorente worked the ball into Correa, who rolled inside onto his left foot and pulled his finish back into the corner.

Atletico were in charge but it took them until the 80th minute to make sure of victory, Carrasco diverting in after the tireless Llorente robbed the ball back on the edge of the area and gave his team-mate a simple finish. 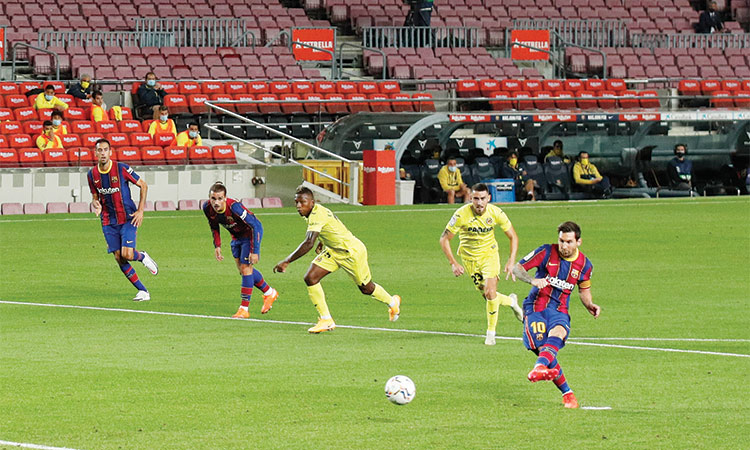