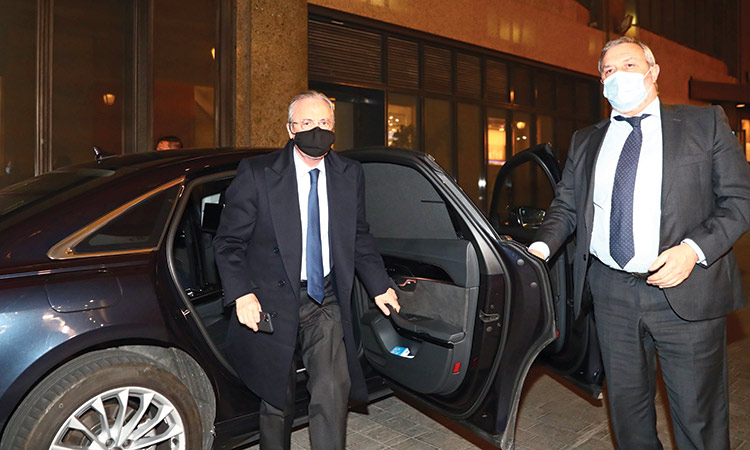 UEFA meets on Friday with revenge on some members’ minds following the attempted Super League breakaway, while the fate of some Euro host cities is also on the agenda.

In the space of 48 emotional hours, between Sunday evening and Tuesday evening, European football’s governing body, aided by fans and politicians, quelled a mutiny by 12 English, Spanish and Italian clubs who presumed to form their own quasi-closed tournament which would have threatened UEFA’s own Champions League and the federation’s governance of the game.

Nine clubs, including all six in England, subsequently withdrew and even if Juventus, Barcelona and Real Madrid, whose president Florentino Perez led the attempted secession, are still refusing formally to capitulate, their proposal no longer looks credible.

Super League chief Perez had insisted on Wednesday the rebel competition was merely ‘on standby’ despite nine teams pulling out.

Premier League leaders City are due to play Paris Saint-Germain, conspicuous by their absence from the Super League plans, in the first leg of the Champions League semi-finals on April 28, a tie Ceferin expects to go ahead as scheduled.

“There is relatively little chance that next week’s matches will not be played,” Ceferin told Slovenian television Pop TV.

“The key thing is that the season has already started. If we cancelled the matches, television stations would have compensation demands.”

Ceferin struck a conciliatory tone on Wednesday, saying he wanted to ‘rebuild the unity’ of European football, and described the English clubs as ‘back in the fold’.

The mass pull-out left the Super League with just Barcelona and Perez’s Real Madrid, along with Italian champions Juventus -- who admitted the lucrative project could not now go ahead.

Barcelona said on Thursday it would have been an ‘historical error’ to turn down the chance to join the European Super League (ESL), with the club deciding to remain part of the project for now.

In an unapologetic statement, Barca said it would carry out an “in-depth analysis” of the breakaway competition before putting the final decision to a vote among the club’s members.

Only three teams - Barca, Real and Juventus - are yet to pull out formally after the withdrawal of the six English clubs prompted an incredible collapse late on Tuesday.

United fans breached security at their club’s training ground on Thursday as they protested against the Glazer family for the owners’ role in the failed breakaway league.

United manager Ole Gunnar Solskjaer was forced to speak to around 20 supporters after they blocked both entrances to the Carrington headquarters.

The protesters unfurled banners that read “51% MUFC 20”, “We decide when you play” and “Glazer out”.

The 51 per cent is a reference to fans holding the majority of voting rights at a club, which is commonplace in German football. Bayern Munich came out strongly opposed to the Super League.

Mikel Arteta said he received a personal apology from Arsenal owner Stan Kroenke and saluted supporters for sending the “strongest message” football has ever seen.

‘Football belongs to the fans:’ Arteta believes the rapid and passionate response fans of Premier League clubs played a key role in convincing the owners to back down.

“This has given big lessons and it shows the importance of football in the world,” Arteta said.

“It shows that the soul of this sport belongs to the fans.”

“I think everyone who loves football didn’t support this Super League, including players at our club,” City captain Fernandinho told Sky Sports.

“We are so happy now because everything was turned around and all the people who love football are calm.

“For sure, we are happy because at the end football wins.”

Despite the tournament’s swift demise, Perez was defiant, saying: “The project is on standby. The project exists.”

“I am sad and disappointed. We have been working on this for three years and fighting against the financial situation in Spanish football,” added Perez, in an interview with Spain’s Cadena Ser radio.

“I have never seen aggression like it, from the president of UEFA and some presidents of the national leagues.

“It seemed orchestrated, it surprised all of us. It was like nothing I’ve seen in my career, like we had killed football. We were working on how to save football.”