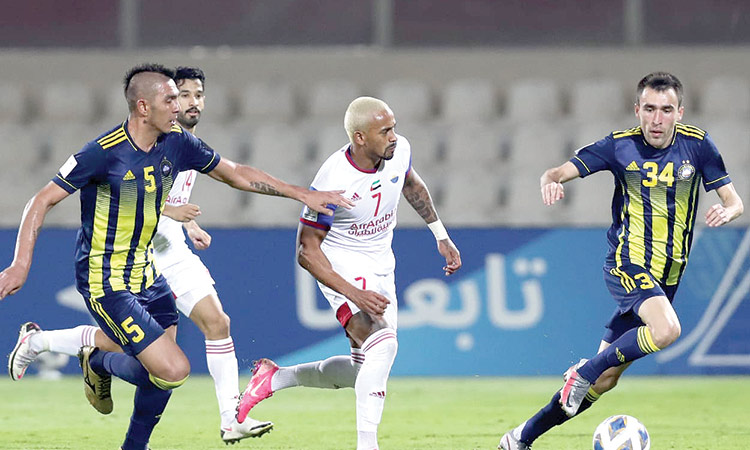 Sharjah and Pakhtakor players in action during their AFC Champions League match.

Sharjah coach Abdulaziz Al Anbari was overwhelmed after a thumping victory against Uzbekistan’s Pakhtakor in their AFC Champions League match on Tuesday.

A resilient Sharjah produced a stupendous performance to rout Uzbekistan’s Pakhtakor 4-1 on their home turf.

“I am thankful to God that the result was very good. Pakhtakor is a strong team. It was a tough match but we played well,” said Anbari.

“We don’t think the next game will as easy as this one. I wish to thank my players, who did exceptionally well and kept scoring throughout the match. We hope to continue the same performance in the next matches. It was not an easy one,” he added.

Khalid Bawazir, Salem Saleh, Caio and Luan Pereira were on target as an unstoppable Sharjah notched up the second victory of the tournament. Sharjah have already scored five goals in three matches so far in the tournament.

Bawazir opened the scoring for the hosts. He struck as early as in the 10th minute and broke the deadlock to put Sharjah ahead.

Saleh right-footed a shot, which went a little wide to the left before Bawazir tapped the ball into the net to give the hosts a 1-0 lead.

“In the beginning, it was turning out to be tough a contest when they scored the equaliser. But after scoring the second goal, we took control of the game completely. There was no looking back,” said a delighted Anbari.

Pakhtakor restored the parity as Dragan Ceran scored the equaliser for the visitors in the 20th minute to make it 1-1.  Sardor Rashidov’s shot was saved by Sharjah goalkeeper Adel Al Hosani but Ceran made a long stride to score from the close range and levelled the score.

However, Pakhtakor’s joy was short-lived. Saleh found the back of the net six minutes later to extend the lead to 2-1. He was assisted by Caio, who gave a perfect pass, as the former slotted home the second one to put the hosts ahead again. The second goal opened the floodgates for Sharjah as they added two more goals through Caio and Pereira in an eventful second-half.

Anbari also hinted at the possible return of Igor Cornado and Al Hasan Saleh into the squad for the next game.

“Hasan and Igor are very good players. It is not easy to substitute players like them. But I am thankful to my players, who have stepped up and taken the responsibility in their absence. The players in the current squad have done an excellent job,” he informed.

“I am happy to see both the players have already started training with the group. Hopefully, when they come back they will add value to the team,” concluded Anbari.

Caio was in the thick of the action once again as he scored one and assisted two goals to pick up his second man of the match award in three games.

“We were following the instructions of the coach and we did exactly what he wanted us do. I am happy that we returned with three points,” said Caio.

Caio, who was assisted by Bawazir, right-footed a shot from the centre of the box to the middle of the goal to extend the lead to 3-1 in the 58th minute.   Perera also joined the party and inflicted more misery on a hapless Pakhtakor. He hit a shot from a long range to score the fourth goal.

Meanwhile, Pakhtakor coach Pieter Huistra lamented the loss and vowed to come back strongly in the next game.`

“If you see, the result was not good for us and Sharjah made the difference. In the end when the score was 4-1, we were already thinking about the next game.

“We have already played three games, which have not been good for us. We have got a lot of catching up to do,” said Huistra.

“Sharjah are clear favourites now with two wins from three games. They are also on the top of the group. But, still there are a few matches left and a lot can happen. We will try to come back strongly in the next matches,” he added.

Huistera also said they were still waiting to know the seriousness of Sardor Rashidov’s injury and hope it was not serious.

“We are not aware, how serious it is. Doctors are working on him and scans will be done tomorrow. But I hope he can play in at least in one of two remaining matches,” he concluded. 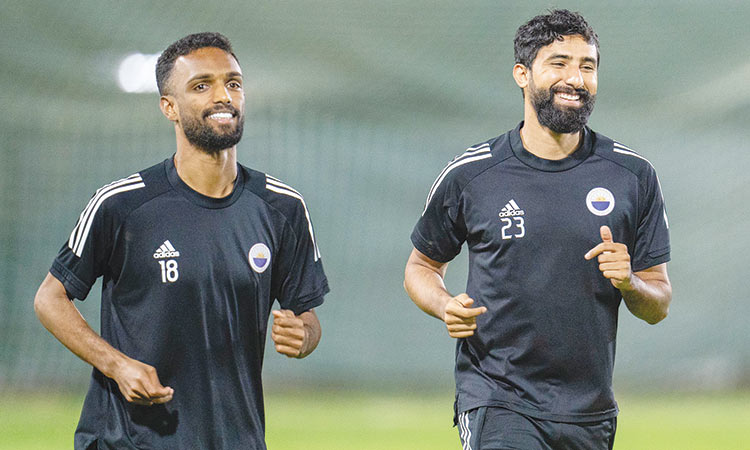