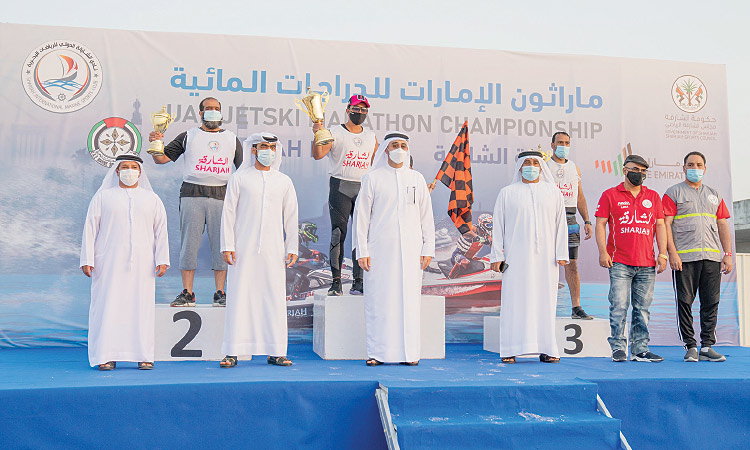 Winners of the Emirates Jet Ski Marathon pose with Khalid Jassim Al Midfa, Ahmed Al Hosani and other dignitaries during the presentation ceremony.

Sheikh Abdulaziz got off to a perfect start and by the end of the final lap, established a significant lead to clinch the crown. Younis Al Awadi finished second while Nasser Al Hammadi took third spot.

The latest victory adds another title to the trophy-laden cabinet of Sheikh Abdulaziz as the avid sports lover has stamped his authority in various championships being held across the country.

Khalid Jassim Al Midfa, Chairman of the Sharjah International Marine Sports Club, crowned the winners of the second round of the Emirates Jet Ski Marathon.

Midfa congratulated the winners and praised the enthusiasm of the participants.

“Despite the long period of suspension of sporting activities following the coronavirus pandemic, the competitors performed well, showing no signs of any mental stress.”

Sharjah has hosted the F1 Powerboat Race since 2000.

The milestone 20th UIM F1H2O Grand Prix of Sharjah took place in December 2019. And since 2004, when Sharjah took over to host the year-ending showcase season finale, there have been many.

The December event is held during the Sharjah Water Festival and attracts over 75,000 visitors to the emirate. Since 2016, the event has also been combined with the Aquabike World Championship (powerboating), making the Grand Prix of Sharjah the finale of the two main disciplines.

Midfa also hoped that the coming period would witness a gradual return of all marine activities signalling a return to normalcy for life that has been customary for the beaches of Sharjah.

He also lauded the efforts of the Sharjah Sports Council, which provides all support for all sporting activities at the emirate level.

The Jet Ski competition took place in line with the UAE’s precautionary and preventive measures, and the organisers followed the highest standards of health and safety to ensure everyone taking part is safe.