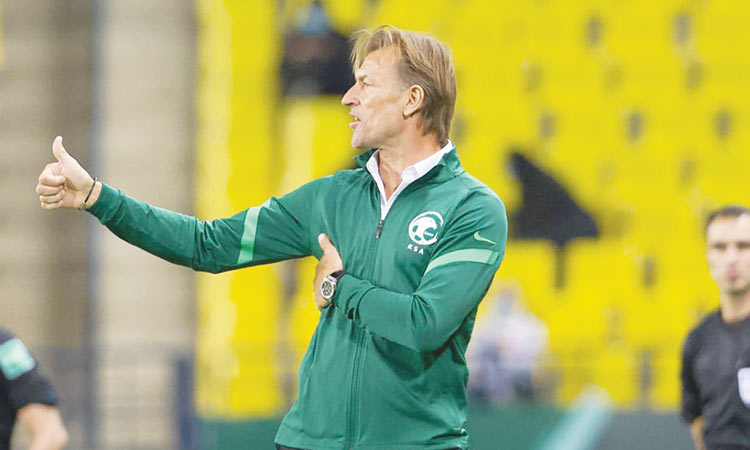 Despite the big win, Saudi coach Herve Renard said his team had to work hard against a Palestinian side who created several problems for them throughout the match.

Head coach Herve Renard was delighted after seeing his Saudi Arabia side cruise to a 5-0 win against Palestine in Group D of the Asian Qualifiers for the FIFA World Cup Qatar 2022 and AFC Asian Cup China 2023 on Tuesday.

The Frenchman was not only happy with the big result but also delighted with his team’s performance, especially the young players.

“The players performed well, especially the young players who also featured in the friendly against Kuwait,” said Renard.

“I’m very happy for them and I want to congratulate them for what they did.”

Despite the big win, the 52-year-old Renard said Saudi Arabia had to work hard against a Palestinian side who created several problems for them throughout the match.

“We didn’t have a good start while Palestine had the first chance but they didn’t score - fortunately for us,” he said. “We started moving the ball (better) and we scored the first two goals which made the match easier for us in the second half.

“Palestine played a lot of long balls which caused some trouble for us. However, we did a good job in general to stop their threat.”

Palestine head coach Noureddine Ould Ali said his team conceded heavily because they respected their opponents too much, which allowed Saudi Arabia to control the match.

After a dominant start to the game, Saudi Arabia got their first chance of the game after 13 minutes as Saleh Al Shehri exchanged passes with Fahad Al Muwallad and fired an effort from the edge of the area that sailed high and wide off the Palestinian goal.

Palestine came closest to opening the scoring 10 minutes before the break as Mahmoud Abu Warda tested goalkeeper Mohammed Al Owais with a curled cross-cum-shot from the right wing which deceived the Saudi goalkeeper allowing Saleh Chihadeh to strike on the rebound, but Al Owais was able to recover and save the second ball.

It was the home side who broke the deadlock in the 38th minute. Left-back Yasser Al Shahrani capitalised on a mistake from goalkeeper Toufic Ali who spilled his attempt to catch Muwallad’s cross from the right flank, and Shahrani was perfectly positioned to head into the empty net from close range. Muwallad turned from creator to scorer two minutes from the break. The winger got on the end of a backheeled Shehri pass inside the box, and after seeing his initial effort parried by the goalkeeper, he followed through at the near post firing into the roof of the net.

The hosts made it 3-0 just six minutes after the restart following a fine run from right-back Sultan Al Ghannam, who dribbled past three players before feeding Shehri with a sublime through pass. The striker kept his composure and applied the finish into the bottom corner.

Shehri doubled his tally soon after as a quick passing move involving Mohammad Kanno and Muwallad saw the latter set up Salem Al Dawsari, who found Shehri leaving him with a simple finish past the Palestinian goalkeeper to make it three international goals in just his fourth senior cap.

Saudi skipper Dawsari rounded off the scoring from the spot three minutes before the end. Defender Ahmed Qatmish handled the ball inside the box prompting the referee to award a penalty kick that was duly converted by the winger to make it 5-0.

The result means Saudi Arabia topple Uzbekistan off the top of Group D, moving two points clear, while Palestine remain bottom of the group with four points from six games. The group fixtures resume in June with Saudi Arabia hosting the remaining matches in a centralised format.

QATAR, REPUBLIC OF IRELAND SHARE SPOILS: Qatar shared a 1-1 draw with the Republic of Ireland in an international friendly match at Nagyerdei Stadion in Debrecen, Hungary on Tuesday as Felix Sanchez’s side brought their European tour to a highly satisfying end.

Playing their third match as an invited team in Group A of the European Qualifiers for the FIFA World Cup Qatar 2022, the reigning AFC Asian Cup champions ended their tour unbeaten after having defeated Luxembourg and Azerbaijan last week.

Sanchez’s side found themselves trailing four minutes into the match when Daryl Horgan exchanged passes with Robbie Brady before crossing to James McClean, whose shot deflected off Pedro Miguel before settling in the net.

Ireland should have doubled their lead in the 26th minute after a Qatari defensive error but Cyrus Christie failed to get the better of goalkeeper Saad Al Sheeb.

Qatar enjoyed a perfect start to the second half as they drew level two minutes in following Almoez Ali’s surging run which ended with a pass to Mohammed Muntari, who fired home from the edge of the area past Ireland custodian Gavin Bazunu.

Qatar came close to taking the lead at the hour mark when captain Hassan Al Haydos made a good run before curling a powerful shot which was blocked by Bazunu.

Ireland nearly scored the winner in the third minute of stoppage time when Cyrus Christie sent in a cross into the area which was headed by substitute Josh Cullen but Al Sheeb reacted quickly to ensure the spoils were shared.