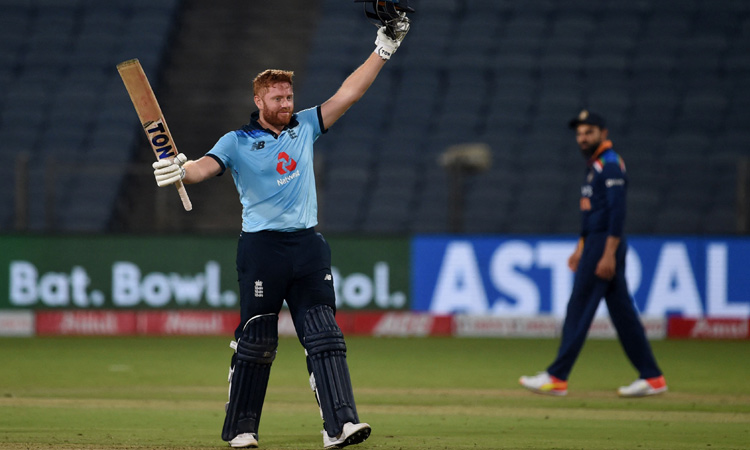 Jonny Bairstow celebrates after scoring a century during the second ODI match at the Maharashtra Cricket Association Stadium in Pune on Friday. AFP

Jonny Bairstow and Ben Stokes launched a six-hitting feast as England chased down 337 against India in a series-levelling win in the second one-day international on Friday.

Bairstow (124) and Stokes (99) put on 175 for the second wicket and smashed 17 sixes between them as England romped home in 43.3 overs with six wickets to spare in Pune.

The three-match series is now level at 1-1 with the decider on Sunday. 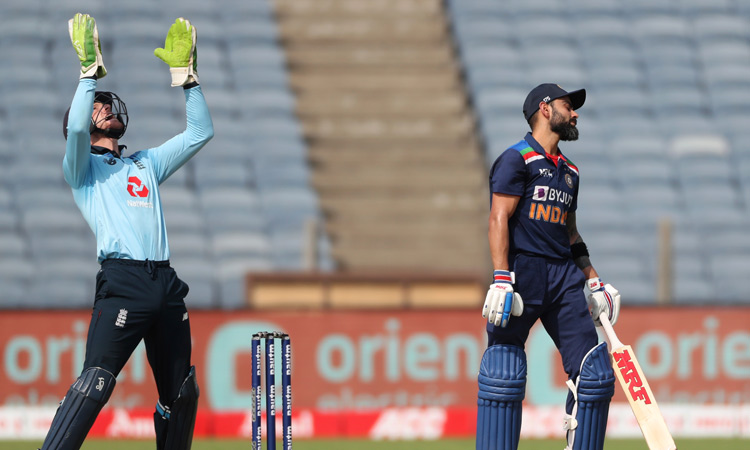 Jos Buttler celebrates as Virat Kohli reacts after his dismissal during the second ODI. AP

Stokes, who hit 10 sixes in his 52-ball blitz, missed out on his hundred after being caught behind off Bhuvneshwar Kumar and Bairstow fell to Prasidh Krishna, who also bowled stand-in-skipper Jos Buttler for a duck.

England lost three wickets for three runs, but Dawid Malan (16) and debutant Liam Livingstone (27) took the team home with an unbroken stand of 50.

It was England’s fifth-highest ODI chase and their best against India.

Bairstow led the charge, tearing into the Indian attack with a 110-run opening stand with Jason Roy, who made 55.

Roy was run out for 55 in a mix up with Bairstow, who then combined with Stokes to trump K.L. Rahul’s 108 that helped India to 336-6 in 50 overs after being put in to bat first.

Bairstow raised his 11th ODI hundred in 95 balls with a six off Kuldeep Yadav, who also took a hammering from Stokes, the Durham left-hander hammering him for three successive sixes in one over as he raced from 50 to 99 in just 12 balls. 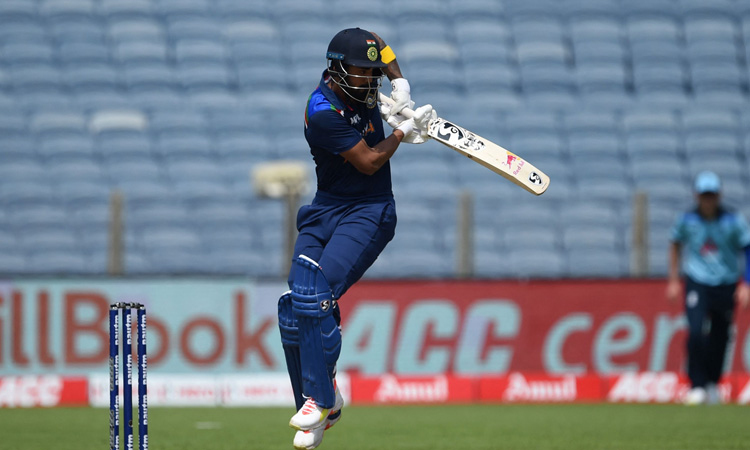 Earlier Rahul was involved in century stands with skipper Virat Kohli, who made 66, and then Rishabh Pant, who smashed a rapid 77.

Reece Topley sent back Shikhar Dhawan caught at slip for four and fellow quick Sam Curran got Rohit Sharma out for 25.

Kohli and Rahul put on 121 for the second wicket to lay the foundations of India’s challenging total. 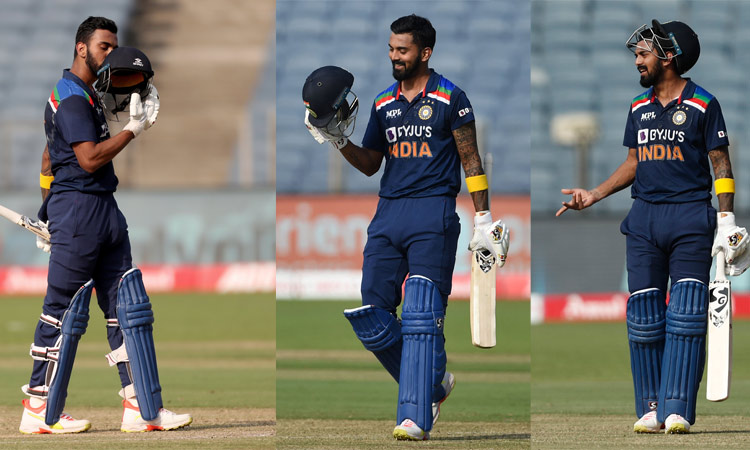 Kohli, who was dropped on 35 by Buttler off Adil Rashid, completed his fifth fifty in seven international innings before being finally caught by Buttler off Rashid.

Rahul, who made an unbeaten 62 in India’s win in the opening game on Tuesday, reached his fifth ODI hundred.

He put on 113 for the third wicket with Pant before he was caught off Tom Curran. His 114-ball knock included seven fours and two sixes.

Pant reached his fifty with a six and smashed seven sixes in his 40-ball blitz.

Hardik Pandya hit 35 off 16 balls as India finished with a flourish, scoring 126 runs from the last 10 overs.