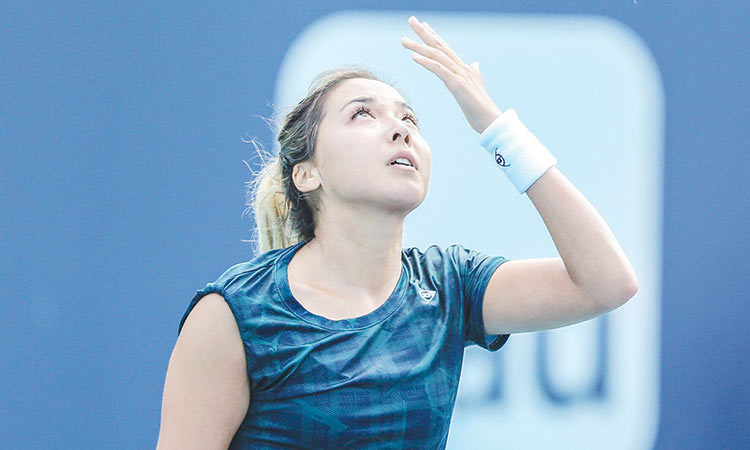 Zarina Diyas reacts after defeating Venus Williams in their Miami Open first round match at Miami Gardens in Florida on Tuesday. Associated Press

Zarina Diyas of Kazakhstan claimed a win over one of the Miami Open’s best performers when she ousted three-time champion Venus Williams, 6-2, 7-6(10), on opening day of the WTA 1000 event.

“I’m very happy with the win today, it was very tough,” Diyas said on-court after her victory. “Venus, I looked up to her when I was little, she’s such a legend. So for me, it’s a really special win today.”

World No.89 Diyas had lost her lone previous meeting against former World No.1 Williams, which came in Cincinnati in 2015, but reversed that result in an hour and a half on a breezy Tuesday in Miami.

Diyas has a positive win-loss record in Miami, though, and improved her main-draw win-loss record at the event to 7-4 after toppling seven-time major champion Williams. Diyas’s best result in Miami is a run to the round of 16 in 2018.

“I’m really happy how I handled the tiebreak,” Diyas said. “It was a lot of nerves, but happy I did it.”

In earlier matches on the Grandstand, two rising 16-year-old Americans, Robin Montgomery and Katrina Scott, made their Miami Open main-draw debuts, but neither was able to notch a win against experienced WTA veterans.

Montgomery, the youngest player in the draw at 16 years and six months old, fell to two-time WTA titlist Magda Linette, 6-1, 3-6, 6-0. World No.50 Linette was contesting her first match of the season, having missed the first two-and-a-half months of 2021 due to a knee injury.

Scott, three months older than Montgomery, lost to former Top 25 player Sorana Cirstea, 6-2, 6-2. Cirstea, who made the Miami round of 16 in 2013, won 63 percent of points returning Scott’s second serve en route to the win in exactly one hour.

An all-American battle wrapped up Grandstand play for the day with Shelby Rogers defeating Madison Brengle 6-3, 6-3 in 67 minutes.

Ajla Tomljanovic also booked a meeting with one of the highest seeds after her 7-5, 6-0 victory over Anastasia Potapova. Tomljanovic will meet No.2 seed Naomi Osaka in her next match.

In other first-round results, Barbora Krejcikova, a finalist last month in Dubai, outlasted Anna Blinkova, 6-1, 3-6, 6-3. Krejcikova, one of the highest-ranked unseeded players at World No.39, sets up an intriguing second-round battle with reigning Roland Garros champion Iga Swiatek.

“Naomi Osaka will now begin the European clay court season a little later in May,” said the Stuttgart organisers in a statement.

The tournament in south-west Germany from April 17-25 is set to go ahead behind closed doors due to the Covid-19 pandemic.

It is one of the first clay-court events in Europe in the build up to the French Open at Roland Garros, which is due to start on May 23.

Osaka won the first Grand Slam title of 2021 last month when she beat Jennifer Brady of the USA in the Australian Open final.

Despite Osaka’s absence, seven of the world’s top ten female players are expected in Stuttgart, headed by world number one Ashleigh Barty of Australia.