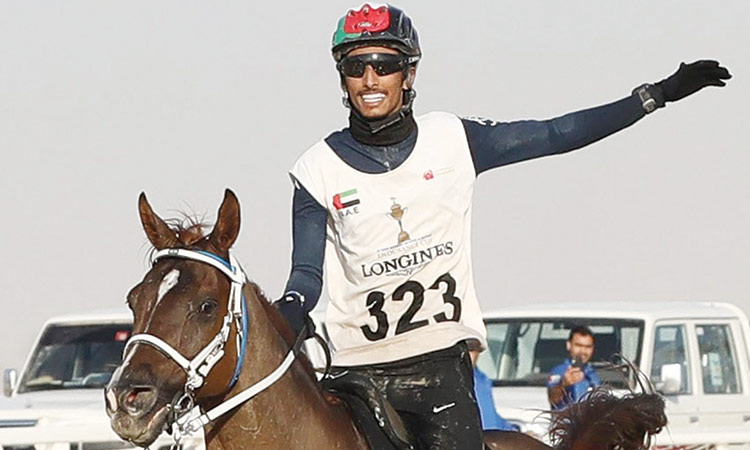 The four-day His Highness Sheikh Mohammed Bin Rashid Al Maktoum Endurance, Festival, the top highlight of the UAE Endurance Calendar, will be held from Tuesday to Friday.

Topping the programme is the prestigious His Highness Sheikh Mohammed Endurance Cup, which draws participation from top local and international endurance riders. Together the festival is a celebration of the sport’s most eminent supporter, His Highness Sheikh Mohammed Bin Rashid Al Maktoum, Vice President, Prime Minister of the UAE and Ruler of Dubai.

The main ride, the Sheikh Mohammed Endurance Cup is held over 160km and will be held at the Dubai International Endurance City (DIEC). The event is an annual tribute to the extraordinary impact Sheikh Mohammed has had on the sport of endurance riding and global equestrian sport.

Presented by Longines, pillar partners Azizi Developments are joined by Al Tayer Motors as they extend their support of the Endurance Cup Festival.

Matthieu Baumgartner, Vice President Marketing of Longines, said: “As Official Timekeeper, we are proud to provide our timekeeping expertise to the 2021 edition of His Highness Sheikh Mohammed Bin Rashid Al Maktoum Endurance Cup presented by Longines. Considered the highlight of the UAE endurance season, the event is aligned with Longines’ long-lasting passion for equestrian sports

In his comments, Mirwais Azizi, Founder and Chairman of Azizi Developments, said: “This event excites all of us at Azizi Developments every year. Especially in times like these, an event where communities can come together, with proper health precautions being taken and adhered to, to rejoice in hope and passion for a sport that is deeply rooted in the UAE’s heritage, is truly a touching experience for all who value not only equestrianism, but also the feeling of togetherness.

“We are absolutely delighted to sponsor this meet for the fourth year running, one that truly raises the bar for excellence every year, and we will continue to support high-profile events that put this great emirate – a global leader in both business and tourism - on the world stage.”

Al Tayer Motors and Land Rover are the exclusive sponsors of the annual Gamilati Cup for Mares, which provides a superb opportunity for the sport’s leading international and regional riders. The dealership is a long-established supporter of equestrian sports in the UAE as well as the Dubai Racing Club.

“The 2021 staging marks our 10th association with this prestigious event. As one of the UAE’s leading automobile dealerships we are pleased to continue our support to this unique race, being held as part of the Dubai Endurance Festival,” said Ashok Khanna, Chief Executive Officer, Al Tayer Motors.

Major General Dr. Ahmad Nasser Al Raisi the President of UAE Equestrian & Racing Federation said: “The prestigious Endurance Festival named for His Highness Sheikh Mohammed Bin Rashid Al Maktoum - Vice President and Prime Minister of the UAE, and Ruler of Dubai- is one of the most important equestrian events in the UAE, as it bears the name ‘Knight of Arabs’.

“The festival is widely acclaimed both in the UAE and world-wide, and is considered an important platform upon which national and international riders compete.”

He also added: “Sheikh Mohammad Bin Rashid Al Maktoum Endurance Cup is a special event, which riders look forward to participating in every season. This is an opportunity for them to thank His Highness for his consistent support to endurance riding, which has allowed the sport to flourish locally and on the international map.”