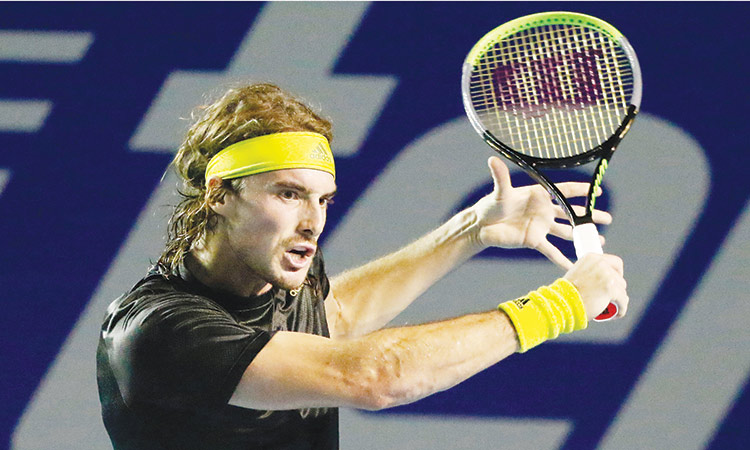 Stefanos Tsitsipas serves the ball to John Isner during their Mexico Open match in Acapulco on Wednesday. Agence France-Presse

Top-seeded Stefanos Tsitsipas outserved big-hitting John Isner on Wednesday en route to a 6-3, 6-2 win in the second round of the Mexico Open in Acapulco, Mexico.

Tsitsipas, who advanced to his fourth straight quarter-final of the season, barely put a foot wrong as he dismantled American in just 57 minutes to set up a blockbuster quarter-final showdown with Felix Auger-Aliassime, who defeated Sebastian Korda (USA) 6-3, 6-4.

It was Greek’s third straight triumph over the world No. 27 from five FedEx ATP Head2Head meetings, according to WTA.

“I mean things worked out pretty well,” Tsitsipas said. “I think I had good return games today and that was very important. You don’t want to get into tie-breaks with this guy, it can get really dangerous.

It was a ruthless performance from the 22-year-old as he struck 23 winners to only three unforced errors. He dropped only one point on his first serve, only four on his second serve, and did not face a break point.

The first set was in the bag on his fourth ace in less than an hour. It was a dominant display as he had not hit an unforced error and won every point when he found his first serve.

Isner was bidding to reach his third straight Acapulco semi-final, but he faced an uphill battle when Tsitsipas threaded a forehand passing shot to bring up break points in the opening game of the second set. The top seed secured it with another pass down the line and was in complete control when Isner’s netted half-volley conceded the double break.

While Isner saved two match points on serve to stay in the hunt at 1-5, it was a momentary reprieve. Tsitsipas will carry a 2-all ATP Head2Head record into his showdown with Auger-Aliassime.

Zverev takes on Ruud: Alexander Zverev will contest his third Acapulco quarter-final in four years, following the second seed’s straight-sets triumph over Serbian Laslo Djere. The German shook a slow start and secured his passage 6-4, 6-3 to face eighth seed Casper Ruud for a place in semi-finals.

The Norwegian prevailed over Dutchman Tallon Griekspoor 4-6, 6-3, 7-6(3) to reach the quarter-finals.

Cameron Norrie ensured there would be an unseeded semi-finalist in Acapulco in 2021 after his 6-4, 6-3 upset of No. 7 seed Fabio Fognini.

Russians lead in st petersburg:  Victories for No.8 seed Daria Kasatkina and wildcard Margarita Gasparyan on Day 4 of the St Petersburg Ladies Trophy guaranteed the highest number in WTA history, according to WTA.

The home pair succeeded in contrasting styles: Gasparyan held off Katerina Siniakova 6-4, 6-4 before Kasatkina emerged on top of a 5-7, 6-3, 7-6(2) knife-edge epic over Aliaksandra Sasnovich in two hours and 41 minutes. They join veterans Svetlana Kuznetsova and Vera Zvonareva in the last eight.

Gasparyan had also shown resilience in her win over Siniakova.  Earlier, Ekaterina Alexandrova, Vera Zvonareva and Svetlana Kuznetsova all booked their places in the quarter-finals.

The top-seeded Alexandrova won 6-3, 6-4 against Tereza Martincova after twice coming from a break down in the second set. Zvonareva upset third-seeded Fiona Ferro to reach her first tour quarter-final since 2019. The 36-year-old Zvonareva, a former Wimbledon finalist, needed 3 hours, 13 minutes to wrap up a 6-7 (6), 7-5, 7-6 (2) win.

Kuznetsova advanced with a 6-1, 7-5 win over Wang Xinyu, who double-faulted twice in a row to give her opponent match point.

Kuznetsova will face Romania’s Jaqueline Cristian, who beat Latvia’s Jelena Ostapenko 6-3, 7-6 (9) in the only last-16 match not to feature a Russian player as reported by WTA.