Tandon relishes the prospect of training with Punjab - GulfToday 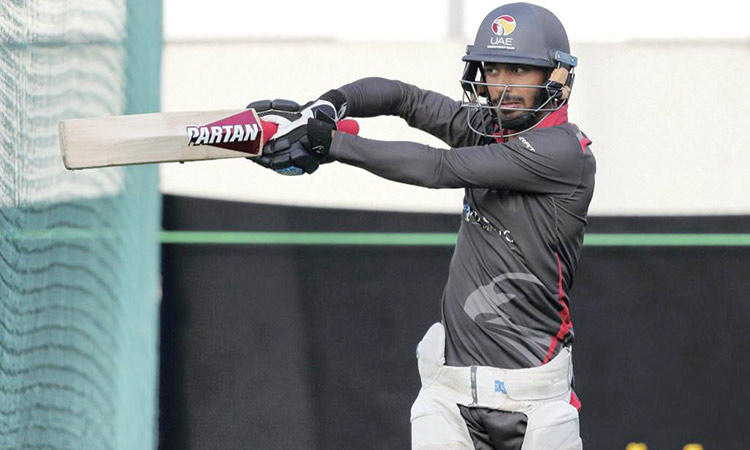 Ansh Tandon plays a shot during a practice session before his departure to India. Supplied

UAE’s emerging cricketer Ansh Tandon is delighted with the prospect of training with the Indian Premier League (IPL) side Punjab Kings.

The left-handed batsman is all set to take a step closer towards realising his dream of playing at the lucrative IPL. He has been called up by Punjab to train with them at their conditioning camp ahead of the IPL’s new season.

An elated Tandon expressed his delight on getting the opportunity and explained how he landed the chance during a telephonic interview with Gulf Today.

“I read on the Punjab’s Instagram page that they were looking for young, emerging cricketers to train with them.

“I sent them my detailed CV and a few batting clips of mine, practising in the nets. They liked it and invited me to train with them at the upcoming camp for a month,” explained the left-handed batsman.

Tandon was supposed to fly to India on Thursday night to join Punjab Kings, who were known as Kings XI Punjab earlier before being rebranded.

He had already got his PCR test done with a negative report. He will join the Punjab team in Mumbai, where they are going to hold their first training camp ahead of the IPL season 14. However, he ruled out signing any contract with Punjab as of now.

“They have asked me just to train with them and did not offer any contract as of now. But if they like my game, I might get a chance to travel with the team during their IPL campaign,” elaborated Tandon.

Albeit Tandon reiterated the fact that it is going to be a great learning curve even if he does not get any contract.

“IPL is the best franchise cricket league in the world. And it is every cricketer’s dream to play in the IPL. It is the most professional form of cricket league,” he added.

“I am really excited. It is going to be a huge learning curve in my career. With the likes of Sanjay Bangar and Jonty Rhodes in their coaching staff, I am sure, I will get to learn a lot which will help in shaping up my career,” he explained.

“I am a little nervous, firstly because of corona protocols and secondly I don’t know many people there except Nicholas Pooran and Chris Jordan,” he informed.

Pooran and Jordan were the team-mates of Tandon at the Abu Dhabi T10’s outfit Northern Warriors. The tournament was held from Jan.28-Feb.6.

Tandon is a promising cricketer, who has been around the periphery of the UAE national team for quite some time. He missed the opportunity of playing against Ireland last month after testing positive for coronavirus along with four others. He has played a lone Twenty20 international for the UAE in which he scored just 14 runs.

“It was a big disappointment to miss out on the opportunity of playing against Ireland. I was totally asymptomatic and was not aware of the fact that I was COVID-19 positive,” he informed.

Tandon is not the first UAE player, who has got a chance to train with an IPL franchsie. Before him, Chirag Suri was bought by Gujarat Lions in 2017 for the base price and the UAE vice-captain remains the only player to be picked by an IPL side till date.

Both Tandon and Suri are the product of Young Talent Cricket Academy (YTCA), which is run by former UAE pacer Shahzad Altaf.

“I love to train at YTCA as they have great facilities. Shahzad sir had a very big influence in shaping up my cricket career. He is like a mentor for me.

“I joined his academy as a nine-year old boy. Since then he has been a guiding force behind me. He took me on the UK tours which was a great learning experience,” concluded Tandon.