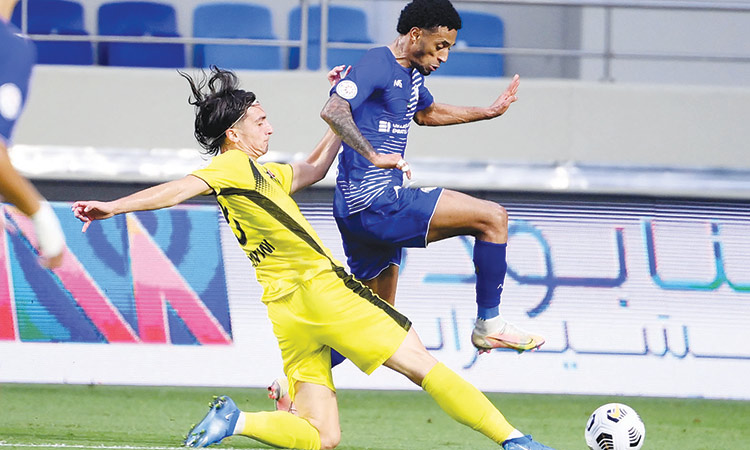 Al Nasr and Ittihad Kalba players in action during their AGL matchweek 21 game at the Al Maktoum Stadium in Dubai on Tuesday.

Al Nasr, who were the better side in the first half, broke the deadlock in the 38th minute. Ryan Mendes’ pass found unmarked Sebastian Tagliabue and the latter made no mistake tapping the ball home.

Ittihad Kalba leveled the scoreline only nine minutes after the restart. Peniel Mlapa latched onto a superb pass from Ahmed Jshak to score the equalizer.

Only six minutes after coming off the bench, Gláuber Lima netted the winning goal for Al Nasr, as the Blues remained fourth with 39 points. On the other hand, the defeat left Ittihad Kalba ninth with 29 points.

Omar Khribin continued his splendid run of form by breaking the deadlock just after the half-hour mark. This marked the Syrian forward’s sixth goal in six Arabian Gulf League matches this season.

Abdulla Hamad doubled the Clarets’ lead in the 42nd, as the guests would take that 2-0 advantage into halftime.

Tim Matavz’s 78th-minute goal sealed the three points for Al Wahda, who raised their tally to 32 points, one point off Al Wasl. Meanwhile, Al Dhafra failed to move further from the relegation battle, as they now occupy 11th place on 20 points.

SHARJAH STUMBLE IN TITLE RACE: A first-half penalty from Carlos Eduardo proved to be the difference at Rashid Stadium as Shabab Al Ahli edged out Sharjah 1-0 in their highly anticipated matchweek 21 clash on Monday.

Shabab Al Ahli were the better side in the early stages of the first half, which saw the guests rely on counterattacks. The match remained goalless, with few chances created by both sides, until the home side were awarded a penalty kick in the 28th minute.

Carlos Eduardo stepped up and converted from the spot, scoring what turned out to be the winning goal. The Brazilian midfielder is now involved in seven goals in his side’s last seven games in the AGL (6 goals - 1 assist).

Sharjah tried to pull off a second-half comeback but were repeatedly denied by the hosts’ solid defensive performance. The King were handed a golden chance to level the scoreline when they were awarded a penalty two minutes from time. However, Shabab Al Ahli keeper Majed Naser saved Igor Coronado’s effort to seal the win.

Shabab Al Ahli ended their six-game winless run against Sharjah. They raised their tally to 37 points and are now in fifth place after Al Nasr’s win over Ittihad Kalba. On the other hand, Sharjah dropped three valuable points in the title race, as they now sit seven points off leaders Al Jazira.

Hatta keeper Mohammed Waleed denied Khorfakkan forward Ramon Lopes on several occasions in the first half. The guests also had a number of chances on target, as Jonathas’ header went inches wide and a free-kick from Dostonbek Khamdamov hit the bar.

Jonathas found the back of the net in the 70th minute, but his goal was ruled out for an offside. It was Khorfakkan who snatched the victory 16 minutes later when Ramon Lopes dribbled past Hatta defence inside the box before tapping home.

Khorfakkan are edging closer to safety as they now have 21 points and occupy 10th place. Meanwhile, the defeat compounded Hatta’s misery as they remain at the bottom with 8 points.

MUHADOV TAKES OVER AS MUHADOV COACH: Rovshen Muhadov is new head coach of the Turkmenistan national team, returning to the role he held more than two decades prior.

The 59-year-old was appointed by following a decision by the Turkmenistan Football Federation Executive Committee, which met on Friday to confirm a new boss ahead of June’s Asian Qualifiers fixtures. 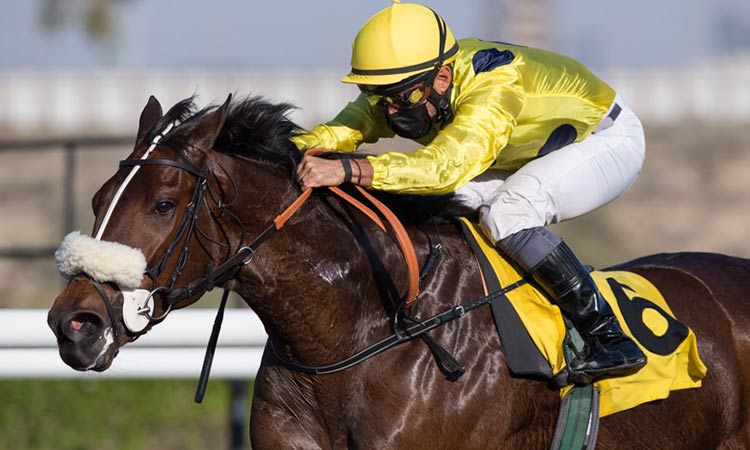 Racing at Jebel Ali on Friday afternoon, the track’s final meeting of 2020, was officially highlighted by a 1200m conditions race for 3-year-olds and dirt debutant Dark Silver demolished his seven rivals to post a very impressive success.