Jaziri, Nishikori advance to 2nd round of Dubai Tennis C’ships 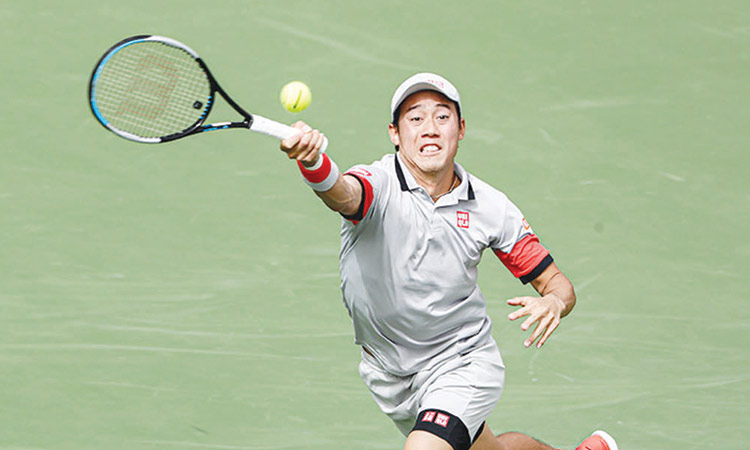 Kei Nishikori plays a return shot against Reilly Opelka during their first round match of the Dubai Duty Free Tennis Championships on Sunday. Courtesy: ATP website

Malek Jaziri celebrated the 100th Tour level victory of his career on Sunday to advance into the second round of the Dubai Duty Free Tennis Championships. But his jubilation was muted, as his victory came after Jo-Wilfried Tsonga was forced to retire with a right arm injury as the match was intriguingly poised at 3-3 in the opening set.

“I’m sad to win this way because I have a lot of respect for him and he’s a really nice guy and hopefully he’ll recover as soon as possible,” said Jaziri. “It’s lots of very good feelings to be back here at this high level and to compete. I keep believing that I can do it and hopefully the people who believe in me, I can give them a lot of joy.

“I’m lucky today to be playing at this level. I’m happy to be here to enjoy these moments. The most important thing for me is my attitude, keeping the way I play very aggressive. I have improved a lot. My forehand has improved, I’ve changed my serve, my slice has improved. I’m putting a lot of things together and hopefully it will pay off.”

Tsonga has barely been able to compete for over a year due to a back injury. After winning one match in the Davis Cup Final in November 2019, in 2020 he was beaten in the only two matches he played, and his match in Dubai against Jaziri was just his third of 2021 and followed a loss in Montpellier and his first win in over a year against Feliciano Lopez in Marseille last week.

Nishikori downs Opelka: Kei Nishikori rallies from a set down to beat Reilly Opelka 3-6, 6-3, 6-4 on Sunday to set up a second round meeting with fifth seed David Goffin at the Dubai Duty Free Tennis Championships.

Nishikori, a former world number four, has suffered several career setbacks due to illness and injury. After losing in the third round of the US Open in August 2019 he underwent elbow surgery for a second time and then in 2020 after a year out of the game he played just four events, winning two matches.

When this season got underway, he lost both of his matches at the ATP Cup and then his first round match at the Australian Open, but things took an upturn earlier this month when he reached the quarter-finals in Rotterdam.

Things appeared to be going against him when Opelka broke to lead 5-3 and served out the first set to love, and when Nishikori broke to lead 3-1 in the second he suffered a problem with his right ankle and needed to have it strapped at the next changeover.

When play restarted, Nishikori appeared to have no further discomfort and he went on to level at one set all. In the third set, Nishikori received the gift of a double-fault from Opelka to gain a 4-3 lead, and that one break was enough to decide the outcome.

“I played a very solid match today,” said Nishikori. “I tried to focus on my first service game because I knew there wouldn’t be many chances on my return game. I tried to make my first serve and I think I did quite enough. I surprised myself how I returned well on break points.”

“We are delighted to welcome Kei Nishikori to Dubai for a second time, and we were all relieved to see that the problem with his ankle was not a serious one,” said Colm McLoughlin, Executive Vice Chairman and CEO of Dubai Duty Free. “We wish him well as we anticipate many exciting contests in the days ahead.”

Top seed Dominic Thiem will be looking to establish some momentum after a disappointing start to the 2021 season, with a fourth round exit at the Australian Open and a quarter-final loss to former Dubai champion Roberto Bautista Agut in Doha.

“I’m on the right way, definitely,” said Thiem, who after a first round bye will play either Christopher O’Connell or Lloyd Harris. “I’m not at the top of my game right now. Australia was pretty strange and also tough to digest in all aspects, so I’m still trying to find the top of my game again and to work hard every day.

“Strong tournaments like Doha last week and here this week are good opportunities to get matches, to play against strong opponents, and I hope I make another step in the right direction now.”

“After such an exciting week of women’s tennis we can now look forward to an equally entertaining men’s tournament,” said Tournament Director Salah Tahlak. “Early thoughts are that our 2018 champion Roberto Bautista Agut will be a strong favourite, after he defeated our two top seeds, Dominic Thiem and Andrey Rublev, to reach the final in Doha. But, as last week demonstrated, it is impossible to predict how the week will unfold and who will end the week as our 2021 champion.”