Thiem and Goffin on collision course at Dubai Open, 2016 winner Wawrinka pulls out 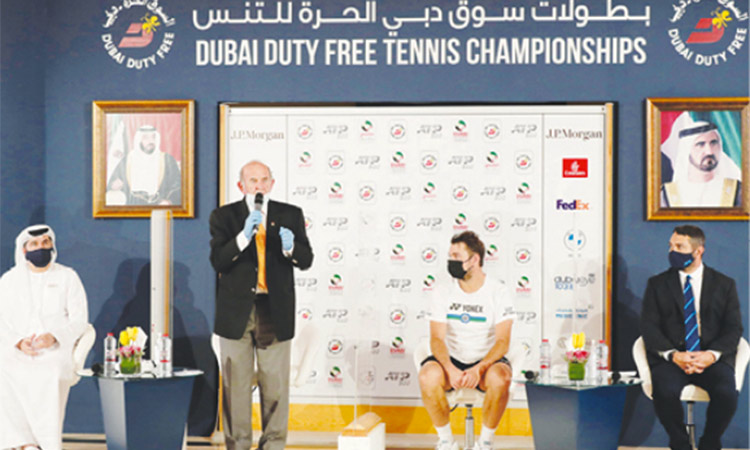 From left: Salah Tahlak, Colm McLoughlin and Stan Wawrinka during the draw ceremony on Saturday.

Gulf Today, Staff Reporter
Top seed Dominic Thiem will be seeking the 18th title of his career and his first crown since he lifted the winner’s trophy at the 2020 US Open when play gets underway in the ATP500 week of the Dubai Duty Free Tennis Championships.

The reigning Grand Slam champion and world number four will be bidding to become the first Austrian since Thomas Muster in 1997 to lift the Dubai Duty Free Tennis Championships trophy. A player for the big occasion, he has reached the finals of the 2018 and 2019 French Open and the Australian Open in 2020, and along with his triumph in New York. He has also reached the final of the ATP Tour Finals in the past two seasons.

But he has some catching up to do in Dubai, where in his only previous appearance in 2015 he fell in the first round to Roberto Bautista Agut. He will be wary of meeting the Spaniard again, after the same player upset him just days ago in the Doha quarter-finals. Thiem will not be disappointed if they do meet again this week, however, as the draw means they would meet in Saturday’s final.

Stan Wawrinka, the 2016 Dubai champion who was at the official player’s draw on Saturday, has withdrawn from the tournament due to fatigue.

Bautista Agut, who claimed the Dubai trophy in 2018, will start as a leading favourite for the title, after not only beating Thiem in Dubai, but this week’s number two seed Andrey Rublev in straight sets to reach Saturday night’s final against Nikoloz Basilashvili. Rublev, meanwhile, will be seeking the match play he failed to get in Doha, where he received a first round bye and then two walkovers into the semi-finals before falling to Bautista Agut.

Thiem receives a bye into the second round, where he will face one of two qualifiers from round one, and second seeded Rublev will also start against a qualifier or Jordan Thompson. Third seed Denis Shapovalov will play either a qualifier or Jan-Lennard Struff, and fourth seeded Bautista Agut begins campaign against Matthew Ebden in the second round after his opponent received a Special Exempt into the second round upon reaching the semi-finals in Marseilles. Special Exempt status is given to players who have been so successful at one event that they would then have difficulty reaching their next tournament in time to compete in the first round.

“There were many thrilling battles throughout the WTA event during the past week, and now we can look forward to further exciting encounters as the 29th staging of the ATP tournament gets underway,” said Colm McLoughlin, Executive Vice Chairman and CEO of Dubai Duty Free. “We wish all the players well and look forward to seeing who will emerge as our 2021 champion.”

“We anticipate another excellent week with a number of players who are worthy of winning such a prestigious title,” said Tournament Director Salah Tahlak. “We have given wild cards this week to Denis Novak, who recently reached the quarter-finals in Montpellier, to Jaziri who made a fantastic run to the semi-finals in 2018, to Aslan Karatsev, who at the recent Australian Open and as a qualifier became the first player in the Open Era to reach the semi-finals of their debut Grand Slam, and finally to former Dubai Duty Free Tennis Championships ball-boy Alexei Popyrin, who last month won the first title of his career in Singapore.”

The Dubai Duty Free Tennis Championships, which is owned and organised by Dubai Duty Free and held under the patronage of His Highness Sheikh Mohammed bin Rashid Al Maktoum, Vice-President and Prime Minister of the UAE and Ruler of Dubai, continues until March 20.