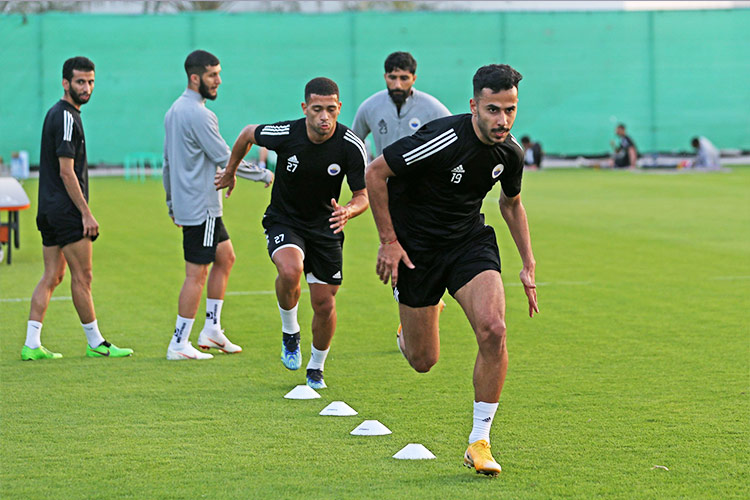 Sharjah players attend a training ession ahead of their AGL match.

Sharjah have witness a drastic fall in the form of late and slipped to third spot after dominating the standings till the 17th round.

Sharjah coach Abdulaziz Al Anbari said that his team will look to rectify the past mistakes and return to the winning ways.

“Our preparations has been going on well for the match. We are working to rectify previous mistakes and we hope that we will succeed in collecting the full three points.

“Facing Khorfakkan and coming out with a positive result that will bring the team back to the path of victories after the previous negative results," said Anbari.

"Our competitor, Khorfakkan are one of the strongest teams in the league and they have been playing good football of late. Their fighting spirit makes the match more difficult for us. But we are determined to win and collect the full points, and therefore we must have full focus on the upcoming match," he concluded.

Meanwhile, Al Jazira coach Marcel Keizer says his players are ready and motivated to notch up a victory against Hatta as the team is looking to return to winning ways after their draw against Shabab Al Ahli in the last round.

“Everybody is fit at the moment, and they are happy and motivated to play against Hatta, which is good for me as a coach in terms of preparing the team and selecting the line-up for the match.

“Khalfan and Ramadan will be available for the game after missing the last match because of suspension, and their return to the squad will be very welcomed, but it will not force us to make any changes to our game plan or style of play,” informed said Marcel.

“Hatta are playing well and the victory they achieved last week against Fujairah will boost their confidence ahead of their game against us this weekend.

“The late goals they conceded in some of their matches left them in this position in the table, but generally they are a good team who defends with discipline and attack with space and confidence,” added Keizer.

“I know from the day one that AL Jaizra have a strong mentality and character, and that’s why I enjoy working with this great group of players.

“Al Jazira have shown their fighting spirit on a number of occasions irrespective of results. We fought hard and showed strong character when we won 6:0 against Ittihad Kalba, and we did the same when we scored the equalizer at the injury time against Shabab Al Ahli,” elaborated Keizer.

“I know for sure that my team will always fight in every single match, without looking at the name of the opponent or their position in the league table,” he concluded.

Meanwhile, Hatta coach Vladimir Vermezovic said they are confident of winning against Al Jazira, who are at the top of the table.

“Our position in the standing makes everything obvious, but that is the beauty of football,” said Hatta coach.

“After out victory against Fujairah in the last match the morale of the players is high and all are in good frame of mind to achieve more success,” he added.

“There are still seven rounds to go and it is enough to climb out of the relegation zone. Players have to work hard and give in everything to remain afloat in the league,” concluded Vermezovic.