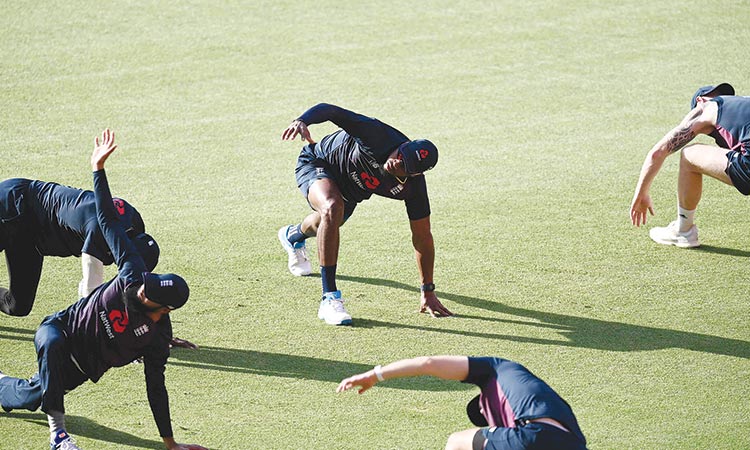 England’s cricketers during a training session ahead of their first T20 match against India at the Narendra Modi Stadium in Motera on Friday. Agence France-Presse

Ahmedabad: India’s winning combination from the T20 International series in Australia will definitely change especially in batting with Rohit Sharma coming in as opener and Rishabh Pant likely to don the gloves ahead of KL Rahul.

Rohit will open with either Shikhar Dhawan or KL Rahul while Pant will most likely play in the middle-order, coming in place of Sanju Samson who played the matches in Australia.

He will, however, keep wickets ahead of Rahul who opened in Australia and also kept wickets.

On Wednesday, India vice-captain Rohit, who is set to feature in a T20 International after a gap of over a year said that Pant has come of age but it is important for others not to put pressure on him and let him be.

“He has performed really well and I don’t see anything stopping him. He likes to enjoy his game. That is what we as team management and team players expect from him. Be out there and enjoy the game and do what he likes to do. The good thing about him now is that he is starting to understand the game situation which is good. Looked good in all the departments. (If he performs in T20Is) that will take his confidence a notch higher,” added Rohit.

It remains to be seen if Pant comes in at No. 4, which was occupied by Sanju Samson in Australia T20Is, or if he comes in at No. 5 or No. 6 and push Hardik Pandya and Shreyas Iyer down.

If India decide to play both Dhawan and Rahul alongside Rohit, Rahul will most likely shift down the order. If he bats at No. 4, then India may even think of not playing Iyer and draft Pant at No. 5 and Pandya at No. 6.

Alternately India may leave out Dhawan and open with Rahul and Rohit.

“We have not decided the composition, can’t discuss that. Wait till 12th,” said Rohit.

India have also drafted in the Mumbai Indians duo of Ishan Kishen and Suryakumar Yadav who lit up the Indian Premier League 2020 while leading their team to the title.

If one of the two plays, then probably one of Dhawan or Rahul and Iyer may have to be benched considering that Pant looks a certainty.

Meanwhile, Rohit has said that while he has managed to tweak his game a bit in the just-concluded series to suit Test cricket, his approach for T20 cricket will remain the same old one where he will look to give the team a good start especially in the first six overs.

Rohit will be playing his first T20 International after over a year and did not tour Australia for the T20s due to injury. India won that series 2-1.

Speaking ahead of the T20 International series that begins at the Narendra Modi Stadium in Motera from Friday, the right-handed batsman talked of the challenges he faced during batting in the last Test when he had switch to watchfulness.

“When you have to go against your own nature and have to do things that you are not used to, then it is a small win. If you keep doing that again and again then you will gain in confidence. The way I batted, especially in the last Test match, when I made only 49 runs but played 150 deliveries, I felt great. I had to play against my nature,” said Rohit.