Rising star Gauff dreams of celebrating her birthday in style 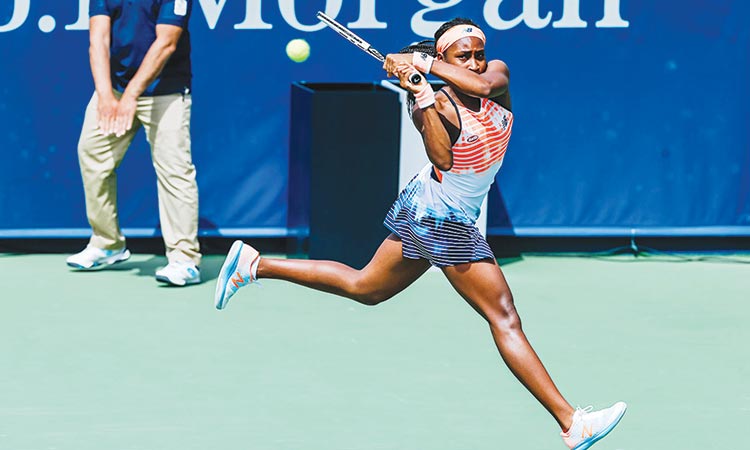 Rising American star Coco Gauff recovered from a set down to stun 12th seed Marketa Vondrousova 3-6, 6-0, 6-4 in a tense second round match at the Dubai Tennis Stadium on Tuesday.

The wildcard entry from America required two hours to battle past the world No.20 from Czech Republic to set up a last 16 clash with qualifier Tereza Martincova.

American sensation will turn 17 on Saturday, the day WTA finals of the Dubai Tennis Championships will take place and Gauff dreams of celebrating her birthday in style.

Reaching final and lifting the trophy would be a perfect way to mark the birthday. That’d be a pretty good birthday gift. That’s definitely a big motivation,” said Gauff.

“I would much rather celebrate it that way, especially now, in today’s world, we cannot really celebrate anything and that probably the best celebration one can get. So, that’s the goal and hopefully that will be my birthday wish, she added.

Gauf earned a reputation of a giant-killer after stunning Venus Williams and then champion Naomi Osaka to reach the fourth round of Australian Open last year.

It was second successive match in Dubai for the debutant where she had to dig deep. Playing in first, Gauff had trouble closing out and needed to save two match points before finally fending off Ekaterina Alexandrova 7-6 (3), 2-6, 7-6 (8) on Sunday.

The American has now played 25 three-setters in her 60 WTA main draw and qualifying matches, including her last seven straight.

“It doesn’t bother me,” Gauff said. “Obviously I like to close in two, but a win is a win and if it takes three sets, I’m willing to play three sets,” added the teenager, who also reached the Wimbledon last 16 in 2019.

“I thought I played well. I’m just staying in there fighting every point, to be honest,” said Gauff, who has been taken to three sets in her last seven matches, winning six.

“Today she started off strong and I was making errors but I found my rhythm in the second and third sets.”

During the third set tension mounted between world No.40 Gauff and her Czech rival as the former complained to the umpire about how Vondrousova was catching her ball toss with her racquet instead of letting it bounce or capturing it with her hand, which she believed to be against the rules.

“I was asking when you toss the ball, are you allowed to catch it with your racquet,” said Gauff referring to her on-court disagreement.

“I thought you had to catch it with your hand or let it bounce first. The umpire said it’s allowed if it’s not a motion. It wasn’t meant to make her upset, it was just asking the question. I left it there but I could tell she was a bit frustrated by that.

“My personality, I fight fire with fire,” she smiled afterwards. “I lost the last two points of that game and she had wild screams - and I like to scream, so I screamed back, Gauff said in her post match interview.

Gauff is viewed as a long-term successor to 23-time Grand Slam singles champion Serena Williams at the top of US women’s tennis.

“Of course I hope to get to where they are but they are the two women that set the pathway for myself, which is why I can never be them.

“I would never have even thought about joining tennis, without them a part of it, since there were very few African Americans in the sport.”