Kuznetsova stuns Svitolina as seeds fall by wayside in Dubai 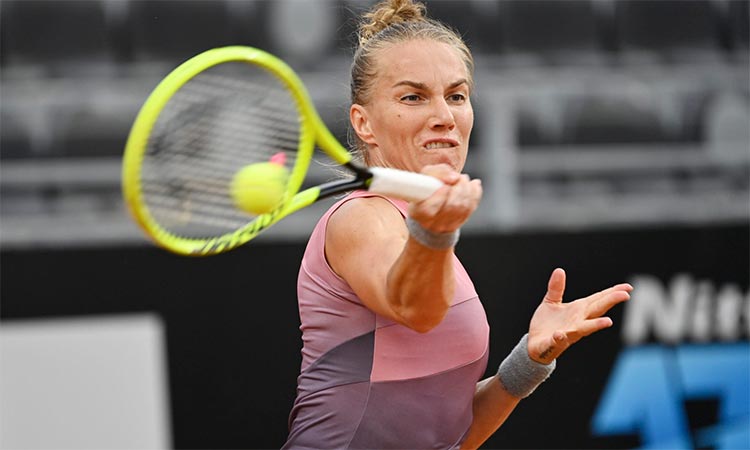 Svetlana Kuznetsova returns to Elina Svitolina during their second round match of the Dubai Duty Free Tennis Championships on Tuesday. Courtesy: WTA website

It was a disastrous day for seeded players as some of the top names tumbled out of the second round at the Dubai Duty Free Tennis Championships on Tuesday.

Fourth seed Petra Kvitova, who beat Garbine Muguruza to clinch the Qatar Open title last week, pulled out due to injury. She retired after winning the first set against Jil Teichmann.

“Since my semifinal in Doha, I felt my adductor,” said Kvitova, after the retirement. “It didn’t get any better in the second set, it just got a little bit worse and I felt pain almost everywhere on the right leg. So, unfortunately, I couldn’t really move how I wanted, and I didn’t want to get it even worse. So that’s unfortunately why I retired.”

Earlier, the world No.5 from Ukraine, who was bidding for a third Dubai title after claiming back-to-back crowns in 2017 and 2018, won the first set easily against World No.41 from Russia.

Svitolina failed to capitalise on the advantage as 35-year-old veteran Kuznetsova made a superb comeback in the second and after breaking her opponent went on to win seven straight games.

The Russian, who has reached the Dubai final three times, won the next set 6-1 comfortably to set up a third round clash with Barbora Krejcikova, who defeated  former French Open champion Jelena Ostapenko 6-1, 6-3.

“I have no doubts I can compete against the best, so I just want to play and enjoy my game,” Kuznetsova said in her post-match press conference.

It was a second exit from a second tournament in a row for Svitolina as she lost to Victoria Azarenka in the Qatar Open last week.

“Obviously the loss is very tough because I think I started the match quite good and I was feeling good going into the tournament and I really love to play here in Dubai. The result is really disappointing,” said the fifth-ranked Svitolina.

Keys was the first seed to join departure lounge as she went down 6-4, 6-3 to the world No 88 Potapova.

Gauff overcame a set deficit to battle past Vondrousova 3-6, 6-0, 6-4 in a tense second round match.

The wildcard entry from America required took two hours to battle past the world No.20 from the Czech Republic to set up a last 16 clash with qualifier Martincova, who defeated Bertens in straight sets.

Second seed Karolina Pliskova fended off a stern challenge from Anastasija Sevastova 6-3 6-7(5) 6-2 to reach the third round while 2019 champion and sixth seed Belinda Bencic had to dig deep against Veronika Kudermetova 6-4 5-7 6-4.

Third seed Aryna Sabalenka got the better of former finalist Alize Cornet 6-2 6-4. Pliskova, who finished as runner-up to Simona Halep in 2015, had to fight off two break points as she served out the first set.

She was on course for victory but faltered after serving for the match at 5-4 in the second. She led the tiebreak 4-1 but lost it 7-5 to take the match into a deciding set, which she claimed on her third match point.

“I had a lot of chances, especially in the second set,” said Pliskova.

“I was match points up in the tiebreak on my serve and I thought I could win much faster. On the other hand, I don’t have to go and practise because if I won in straight sets I would have to go! So that’s good, and it gave me strength that I was able to fight back after that unfortunate second set and still play quite good tennis after that.”

Swiatek will next meet No.9 seed Garbine Muguruza, who dismantled Amanda Anisimova, 6-4, 6-2.