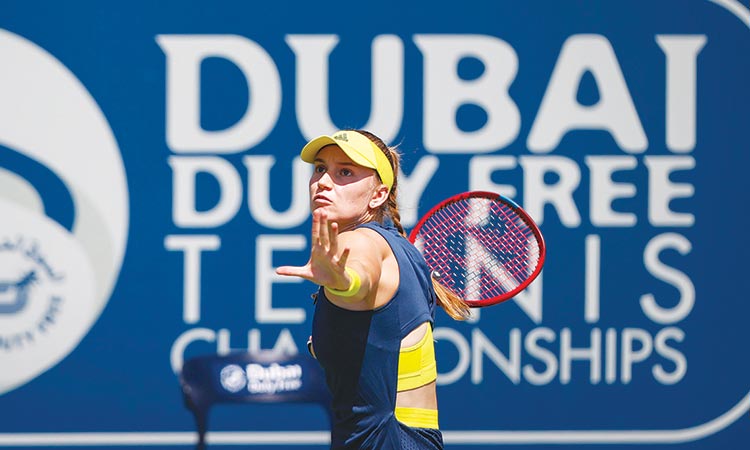 Elena Rybakina in action during her first round match of the WTA Dubai Duty Free Tennis Championships against Saisai Zheng on Monday. Supplied

The Spaniard, though victorious, was very erratic, broken by her much-lower ranked opponent three times during the course of the match, once in the first set and twice in the second. However, in the end, the more fancied Spaniard beat Begu in one hour and 38 minutes to progress to the next round.

RYBAKINA CRUISES: Earlier, last year’s finalist Elena Rybakina defeated Saisai Zheng 6-0, 6-4 to book a spot in the second round of the tournament.

The 14th seed from Kazakhstan took more than an hour to overcome her Chinese rival. Rybakina, who lost to Simona Halep in the final last year, dominated the first set after breaking Saisai thrice.

The 21-year-old again broke Saisai early in the second set to establish a 3-1 lead. Staging a brief comeback, the world number 48 from China managed to earn a break before holding serve to draw level 3-3.

Stepping up the game, Rybakina broke Saisai in the final game to wrap up the battle. She will next face Arab tennis star and Tunisia’s world No.31 Ons Jabeur.

“After winning the first set, I lost a bit of concentration in the second,” said Rybakina.

“Also Saisai, she played well – she decided to risk stepping in on the returns. So overall I think it was not a bad match. I am happy to come here again. It’s a pity there are not the crowds here like before, but I’ll try to do my best this week,” Rybakina added.

Caroline Garcia recovered from a set down to see off Angelique Kerber 3-6, 6-2, 6-4. The French needed one hour and 43 minutes to outlast the German at the centre court.

The former world No.4 made a superb comeback in the second after losing the opening set.

With the help of two breaks, Garcia won the second set 6-2 to force a decider and the twists continued in a pulsating third set.

The German broke her rival early in the third set to move ahead 4-1. Refusing to give up, the world No.47 went on to win five successive games and seal a spot in the next round where she will meet lucky loser Martina Trevisan.

KEYS MARKS DEBUT WITH WIN: Debutant Madison Keys made a winning start after brushing aside qualifier Liang En-shuo 6-1, 6-1 to book her place in the second round.

The 11th seed required just 64 minutes to send Liang packing. Keys, who tested positive for coronavirus in January and missed the Australian Open, raced to a 3-0 lead and with a further break in the sixth game took the opening set easily.

The world No.19 staved off a few break points at the beginning of the second set and later reeled off six straight games to win the match. Keys will next face Anastasia Potapova, who beat Laura Siegemund 6-3, 6-2.

“I feel good about today,” said the 2017 US Open finalist. “I played a really clean first set, and in the second set I had some break points against me but I thought I handled them pretty well and kept the momentum. It’s been tough,” Keys added.

“I definitely feel a little bit behind compared to everyone else, but I know if I keep working at what I’ve been practising and try and implement that in matches then more matches will come.”

Anett Kontaveit eliminated Timea Babos 6-2, 6-1 within an hour to reach the second round.

After being broken in the first game of the opening set, Kontaveit never looked behind. She dominated the proceedings and earned three breaks to win the first set. The story remained the same in the second set as Kontaveit dropped serve and immediately broke Babos. Later, she won six straight to clinch the victory. The 15th seed will face Sorana Cirstea, who battled past Lesia Tsurenko 6-4, 6-4.

Meanwhile, the Indian tennis sensation Sania Mirza and Slovenian partner Andreja Klepac advanced to the next round of doubles after beating the American-Chinese duo of Shelby Rogers and Saisai Zheng 6-1, 6-3.