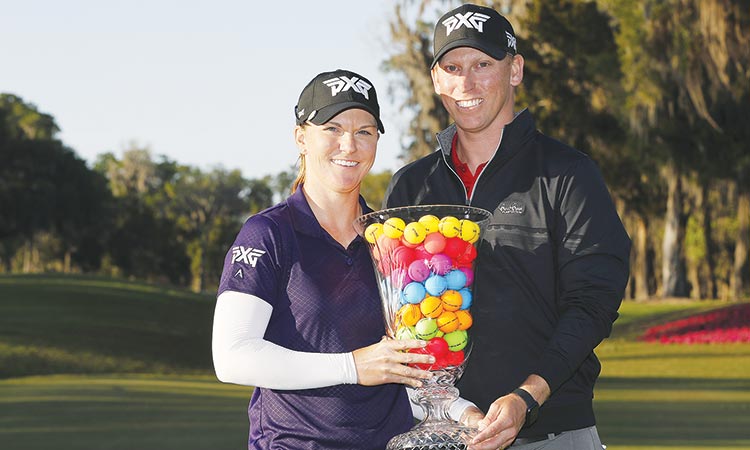 US’ Austin Ernst poses with her caddie and brother Drew Ernst and the trophy after winning the LPGA Drive On Championship in Ocala, Florida, on Sunday. Agence France-Presse

Bryson DeChambeau received a text message on Sunday morning from Tiger Woods to keep fighting, good advice for a final round that turned out to be the toughest at Bay Hill in 41 years.

Inspiration from Arnold Palmer is everywhere, and DeChambeau was particularly drawn to the King’s motto to play boldly.

DeChambeau needed every bit of that Sunday to win the Arnold Palmer Invitational, playing the final 17 holes without a bogey, entertaining thousands with another monstrous drive over the water and delivering one last par with a 5-foot putt on the final hole for a one-shot victory over Lee Westwood.

DeChambeau closed with a 71, matching the low score of the final round in which no one broke 70 on Sunday at Bay Hill for the first time since 1980.

Westwood, who turns 48 next month, was up to the task.

Never mind that DeChambeau’s rocket over the water on the 565-yard sixth hole was 168 yards beyond Westwood. Their second shots were only 6 feet apart and both made birdie.

Westwood fought to the end. He fell out of a share of the lead with a three-putt bogey from 40 feet on the 14th. Just as critical was failing to make birdie on the par-5 16th with a wedge for his second shot from the fairway, and DeChambeau having to scramble for par.

Corey Conners stayed in the mix until the very end. The Canadian holed a 15-foot eagle putt on the 16th to get within one shot, only to find a bunker on the par-3 17th and miss a 6-foot par putt. With a bogey on the final hole, he shot 74 to finish alone in third.

Tied for the lead with Kupcho after each of the first two rounds and a stroke ahead entering the day, Ernst closed with a 2-under 70 to finish the wire-to-wire victory at 15-under 273.

Kupcho, coming off a closing eagle Saturday, had a double bogey and three bogeys in a 74.

Following sisters Jessica and Nelly Korda in the first two events of the year, Ernst gave the US three straight victories to open a season for the first time since 2007.