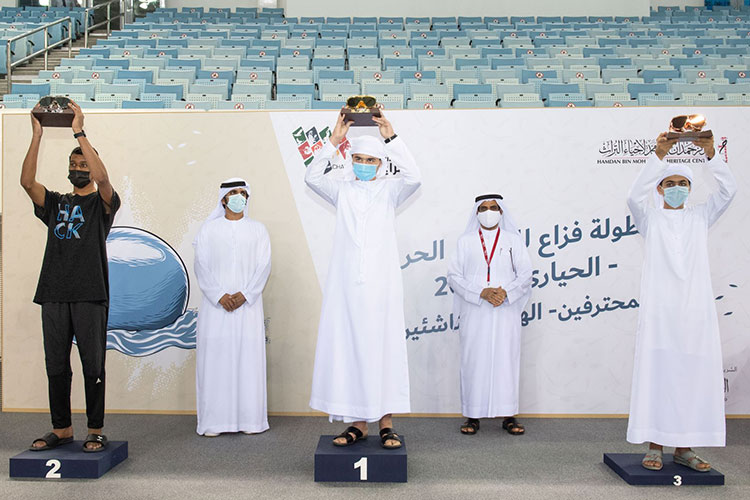 Serbian diver Branko Petrovic, who set the world record for freediving back in October 2014, once again dominated in the Open category. He held his breath underwater for 8mins and 3.32seconds to grab first place.

Croatian diver Budimir Sobat, who at 57 years old, defied his age and managed to finish in second place, beating younger athletes. Sobat clocked in 6mins and 57.69seconds while Slovenian diver Samo Jiranko came close in third spot with a time of 6mins 45.9seconds.

Kuwaiti diver Hassan Al Sharrah finished in first place in the UAE and GCC Category with a time of 6mins and 9.14seconds; while Al Hadoum Muhammad Al- uhairi came in second place at 4mins and 51.95seconds and Omar bin Abdullah Al-Amiri in third at 4mins and 11.24seconds. 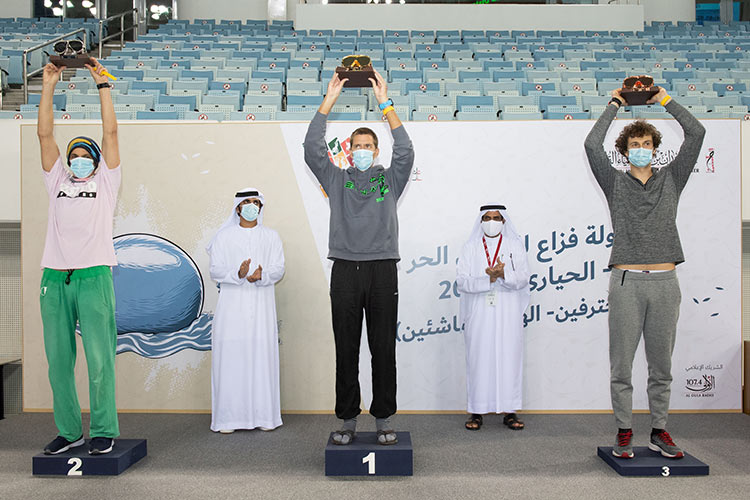 Although his time this year was below his expectation, he said it was enough to finish in first place and a big achievement considering he had only three weeks of training due to restrictions in gym facilities back home caused by the global COVID-19 pandemic.

“I will return next year to achieve better numbers and I thank the organising committee of the tournament. The facilities are of the highest degree of professionalism, which makes us happy to participate as the tournament continuously grows from year to year,” he added.

Kuwaiti diver Sharrah, who is also a multiple freediving champion, added: “The pandemic has brought about the closing of swimming pools which prompted us to train in different places to be able to come prepared for the good before coming to Dubai to participate in the Fazza Freediving Championship.

Emirati teen Marzouqi, who is participating for the last year in the Juniors Category, said his victory was due to his dedication and hard work. Marzouqi twice won first place in the tournament and he will be moving to the UAE men’s category next year.

The awarding ceremony was led by Hamad Al Rahoumi, Head of the Fazza Championship for Freediving Committee, and Rashid Al Khasouni, Deputy Director of Championships at HHC.

Rahoumi noted special arrangements were made this year – with athletes coming in from European and GCC countries – to ensure the continuity of the event despite the pandemic and to send a strong message to the whole world that the UAE is winning in the fight against COVID-19. Al Rahoumi added the tournament's success will surely add more dimensions in boosting the sport further in the future.

Meanwhile, Suad Ibrahim Darwish, Director of Championships at HHC, confirmed winners will undergo anti-doping examination. The tests will be submitted to the International Anti-Doping Committee of the International Federation of Diving.