Jabeur, Kuznetsova advance to next round of Dubai Open - GulfToday 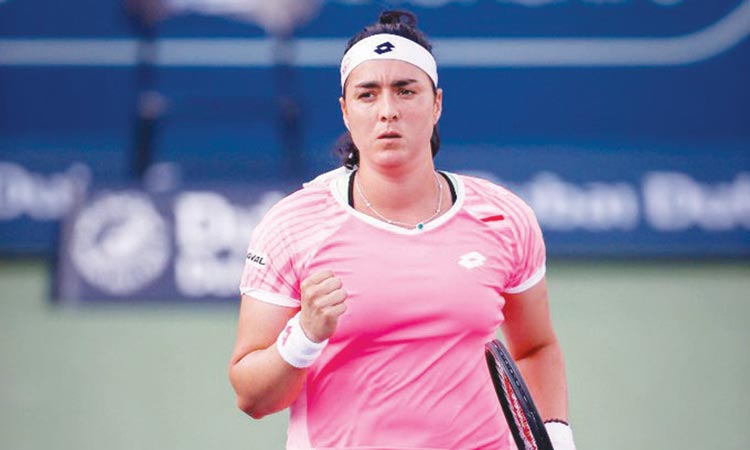 Ons Jabeur reacts after her victory over Katerina Siniakova in the first round of the Dubai Duty Free Tennis Championships on Sunday. Courtesy: Twitter

Ons Jabeur of Tunisia led a group of early winners into the second round of the Dubai Duty Free Tennis Championships as main-draw matches kicked off on Sunday.

The 31st-ranked Jabeur eased past Katerina Siniakova, 6-2, 6-3, to reach the second round for the fourth time in her four main-draw showings at the event. Jabeur, coming off a close loss to Karolina Pliskova in Doha last week, garnered her 10th career main-draw match victory in the Middle East with her 65-minute victory over World No.68 Siniakova.

Siniakova had won her first five encounters with Jabeur before the Tunisian at last turned the tables with a victory in Doha last year. Jabeur made it two in a row against Siniakova in Dubai on Sunday, converting four of her nine break points and slamming 16 winners, four more than the Czech.

Siniakova was also undone by 27 unforced errors in the match, as she fell to 0-3 in singles thus far in 2021. Jabeur was helped along by fierce forehands in the opening frame, using that shot to break for the initial 3-1 lead.

After a love hold for 5-2, Jabeur was assisted by a double fault from Siniakova on her second set point in the following game. After falling behind an early break in the second set, Siniakova at last grabbed her only service break to tie up the clash at 2-2. But Jabeur took the initiative as both players charged to the net more frequently as the set wore on, reclaiming the break advantage at 4-2.

Another strong forehand by Jabeur forced an error from Siniakova to convert her second match point and close out victory.

Earlier in the day on Centre Court, a pair of Russians claimed wins to also advance to the second round. Two-time Grand Slam champion Svetlana Kuznetsova earned a comeback victory over Wang Qiang, 6-4, 1-6, 7-5, to notch the 20th Dubai main-draw match-win of her career.

Former World No.2 Kuznetsova had to dig deep before outlasting Wang in two hours and 21 minutes.

Wang served for the match at 5-4 in the decider, but Kuznetsova successfully broke back for 5-5, eventually winning the final three games of the affair to clinch the comeback win. Next up for Kuznetsova will be a second-round match against No.1 seed Elina Svitolina.

Drop in prize money hits motivation: Svitolina: Svitolina said the drop in WTA prize money has reduced her motivation at some events but added that players must learn to adjust their expectations.

Petra Kvitova earned $68,570 for clinching the title in Doha on Saturday, 57 per cent less than what the champion made in the Qatari capital two years ago.

The earlier Abu Dhabi 500 event, staged at the start of this season to give players an opportunity to compete after the cancellation of the Brisbane International, offered a total prize pot of $565,530 - all of which was put up by the tour itself - compared to the $1,434,900 provided by Brisbane last year.

The trend is expected to continue in the coming months, with only the grand slams still able to award the players huge sums.

“I had to adjust, like for example with my team, with my daily life,” Svitolina told reporters in Dubai. “Maybe be a little bit smarter and I think for everyone it’s important to readjust because right now there is definitely a significant change in the prize money,”

“I think it’s really not easy for some players to adjust and for me, personally, it’s maybe also a little bit [tough] right now, because we’re a bit spoiled from the years that the prize money was really high.”

The 26-year-old, who owns 15 WTA titles and has amassed more than $20 million in prize money throughout her career, noted that the recent developments could have an impact on her scheduling.

“Now for sure it gets into your head that you know you have less motivation at some tournaments to play because the prize money is much lower and you’re playing for example a smaller tournament and you’re tired afterwards to play a big one, so you would skip it,” she said.