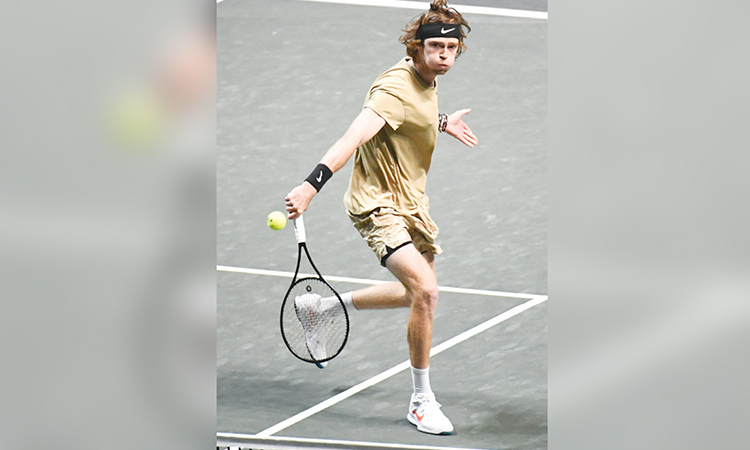 Andrey Rublev plays a shot against Stefanos Tsitsipas during their semi-final in Rotterdam on Saturday. Associated Press

No.4 seed Petra Kvitova stormed to her 28th career title and second at the Qatar Total Open with a 6-2, 6-1 rout of Garbine Muguruza, a reprise of the 2018 final.

Three years ago, the Czech had needed two hours and 16 minutes to down Muguruza in a 3-6, 6-3, 6-4 thriller and claim her first Doha trophy. This time around, Kvitova struck 11 winners to 18 unforced errors for a victory that clocked in at a more comfortable time of 66 minutes. The result also extends Kvitova’s dominance in her rivalry with Muguruza to 5-1, including the last five meetings.

Muguruza’s opportunities were minimal, and came at the start of each set. The Spaniard garnered the first break points of the first set in the third game, and captured the Kvitova serve for the only time to kick off the second set.

But Muguruza was unable to build on either opening. Consecutive double faults handed the break back immediately in the second set, and overall the former World No.1’s performance was too riddled with mistakes as her unforced error tally mounted to 27. This was particularly evident on her backhand wing, usually Muguruza’s stronger weapon, which repeatedly dipped just long or wide.

Conversely, Kvitova would go from strength to strength after successfully navigating the danger zone. The two-time Wimbledon champion’s strategy in gusty conditions was more effective, clubbing the ball through the middle and handcuffing Muguruza with depth and pace rather than going for lines. Kvitova was also able to up her focus when she needed to, saving six out of seven break points.

As the finishing line hoved into view, Kvitova stepped on the pedal with more spectacular tennis, conjuring up a pair of breathtaking winners after seemingly being out of the point as she reeled off the last six games of the match.

Both players were seeking to snap an uncharacteristic title drought. Kvitova had not won a tournament since Stuttgart 2019, and had lost three of her last four finals - including in Doha last year to Aryna Sabalenka. But today’s result reaffirms Kvitova’s overall dominance in title matches, with her career record in them now 28-10.

Muguruza, meanwhile, is enjoying one of the most consistent stretches of her career. The two-time major champion has won at least two matches in 11 of her past 12 tournaments, dating back to the start of 2020. This week marked her third final in that span, and second of this season already following February’s Yarra Valley Classic.

The loss, though, means that Muguruza is still seeking her first trophy since Monterrey 2019, and the last time she was victorious at 500/Premier level or higher was in winning Cincinnati 2017.

Meanwhile, Andrey Rublev beat Stefanos Tsitsipas 6-3, 7-6 (7/2) on Saturday to advance to the final in Rotterdam and extend his winning run in ATP 500 events to 19 matches.

Fourth seed Rublev broke Tsitsipas twice in the opening set and put the second-seeded Greek away with a dominant tie-break to secure victory in 97 minutes.

Rublev, through to a fourth straight ATP 500 final, will face Borna Coric or Marton Fucsovics on Sunday as the Russian bids for his eighth career title.

“A final is always special, so I am going to try to do my best tomorrow.”

Aslan Karatsev reached another milestone in his fairytale start to the 2021 ATP Tour season on Saturday, when he beat Lloyd Harris 6-3, 6-2 to claim his maiden ATP Tour title at the Dubai Duty Free Tennis Championships. 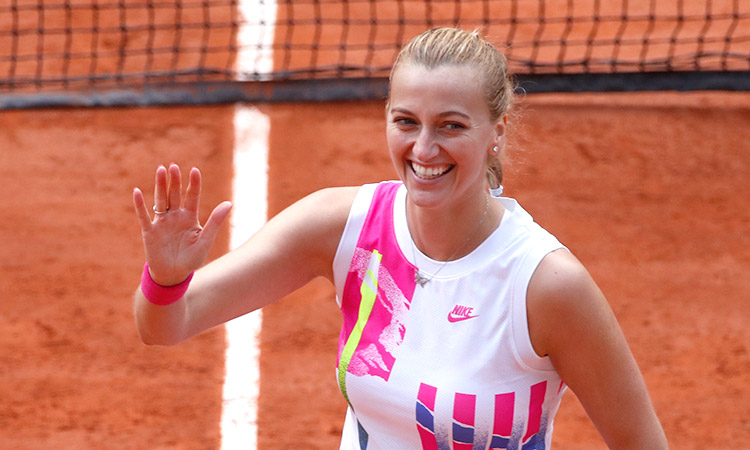 Kvitova back in Roland Garros semi-finals after eight years 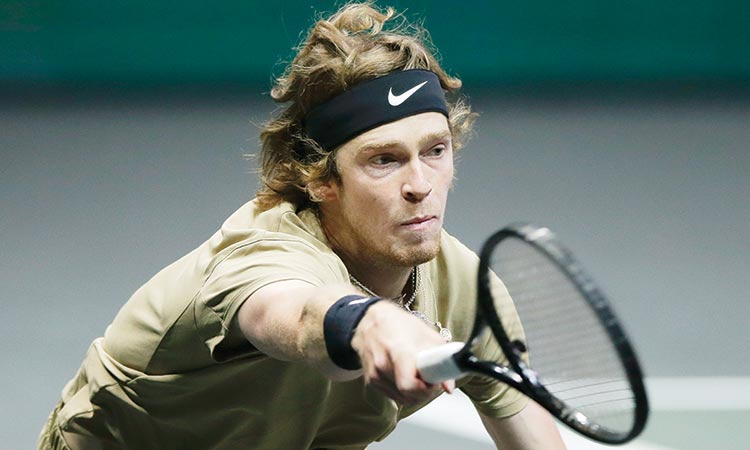