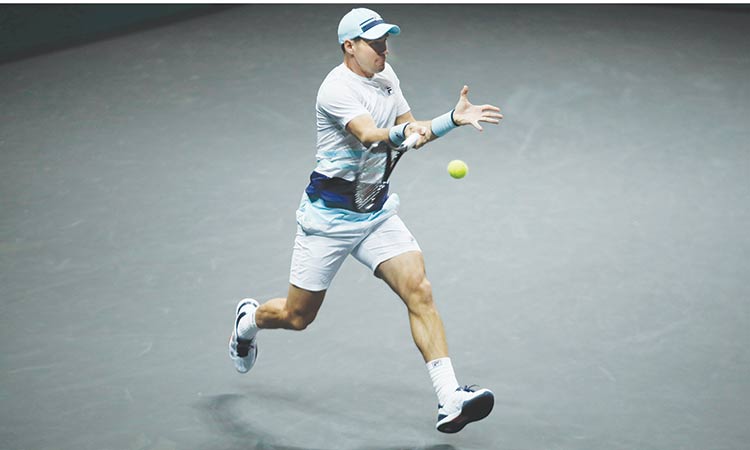 Dusan Lajovic in action against Daniil Medvedev in their first round match of the Rotterdam ATP on Wednesday. Associated Press

Daniil Medvedev became the latest big name to fall in the first round of the Rotterdam ATP after world number seven Alexander Zverev and three-time Grand Slam winner Stan Wawrinka. The Russian world number three -- the top seed for this week’s tournament -- lost in straight sets 7-6 (7/4), 6-4 to Dusan Lajovic on Wednesday.

Medvedev arrived in the Netherlands following his run to the Australian Open final but was dumped out in just over 90 minutes by Serbian Lajovic, currently ranked 27th.

Medvedev threw his racket down in a fury after being broken in game nine of the second set, having a row with the umpire and starting the final game with a point penalty as a result.

The outburst came towards the end of a tense performance from the 25-year-old which featured eight double faults and 25 unforced errors.

A calm Lajovic served out the 10th game to set up a second-round clash with Borna Coric.

The defeat was painful for Medvedev as he would have taken number two spot in the world rankings from Rafael Nadal, who withdrew from the tournament with a back injury, had he reached the final.

Earlier, Zverev, 23, was dumped out by Kazakhstan’s Alexander Bublik on Wednesday in a shock straight sets 7-5, 6-3 defeat.

German Zverev was seeded third in the tournament but was surprised by 43rd-ranked Bublik in just one hour, 19 minutes.

Bublik, who reached the final of last week’s tournament in Singapore, will face Tommy Paul in the second round after the American defeated Italy’s Lorenzo Sonego 6-4, 7-6 (9/7).

Wawrinka was knocked out on Tuesday after losing in straight sets 6-4, 7-5 to Russia’s Karen Khachanov.

AZARENKA, KVITOVA, SAKKARI IN DOHA LAST 8: On a day of second-round action packed with big names at the Qatar Total Open, former champions Victoria Azarenka and Petra Kvitova led the charge into the quarterfinals with straight-sets wins. No.8 seed Azarenka came through 6-4, 6-2 over qualifier Laura Siegemund, before No.4 seed Kvitova bounced Anastasia Pavlyuchenkova 6-1, 6-3.

Eight of Kvitova’s previous encounters with Pavlyuchenkova had gone the distance, but there was little danger of that today. The Czech fired 31 winners, kept her unforced error count to 19 and posted a 76% first serve percentage. On three of the four break points she faced, she would bail herself out with clutch serving.

The exception was at the start of the second set, but Pavlyuchenkova squandered her advantage as soon as she had it. Leading 3-1, the Russian handed the break back with a pair of double faults, and Kvitova resumed normal  service to race through the last five games of the match.

Meanwhile, Australian Open quarterfinalist Jessica Pegula’s rich vein of form continued with a 6-2, 7-5 win over 2016 runner-up Jelena Ostapenko. In a contest of aggressive baseline ballstriking punctuated by the occasional dropshot, the American qualifier was more consistent and better able to rely on her second serve.

After a big win in her first game of the year against sixth seed Belinda Bencic, American Madison Keys was dominated in the second round by Greek Maria Sakkari who beat her in just 1 hour and 10 minutes.

This was the second confrontation between the two, and the second win for Sakkari. Unlike the opening game, Keys was very erratic and, despite essaying many powerful strokes, she lacked consistency.

On the other hand, Sakkari lost only 12 points in service in total, only three points in the first set and facing only one break point, which she saved. She won 18 of the 26 points that Keys played with on her second service and managed two breaks in each set, on her way to victory.