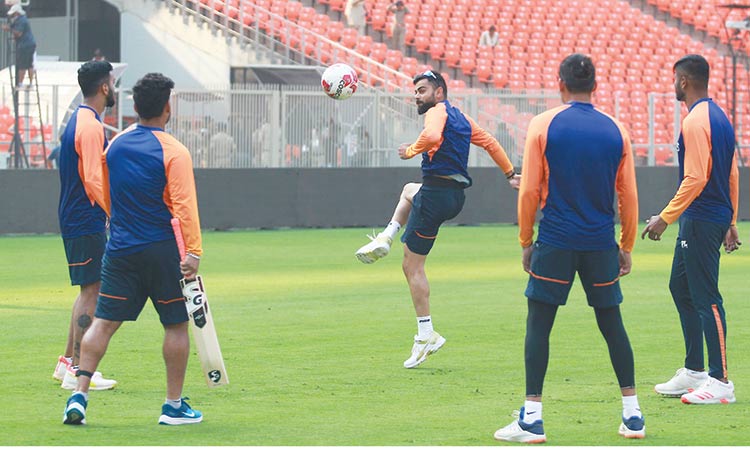 India look to spin out England in the fourth Test on a similar pitch to the one that hosted last week’s two-day match, vice-captain Ajinkya Rahane said on Tuesday.

The hosts demolished England in one of the shortest Tests in history to lead the four-match series 2-1 at the Narendra Modi Stadium -- the world’s biggest cricket venue -- in Ahmedabad.

Both the teams return to the same venue for the final Test after days of intense scrutiny and criticism of the spin-friendly track.

“Wicket will be similar to the third Test match and also the second Test in Chennai. Spinning track,” Rahane told reporters ahead of the Test starting on Thursday.

Spinners ruled the competition as England were skittled out for 112 and 81 in a day-night game that lasted just 842 balls -- the shortest Test since 1935.

Former England players demanded answers from the International cricket Council, accusing it of letting the wealthy and powerful Indian board get away with providing poor pitches.

While Rohit Sharma has been the standout performer, others have struggled to get a big score even though batsmen like Rahane and skipper Virat Kohli have scored some fighting half-centuries.

Rahane attributed it - especially the poor show in third Test’s first innings - to lack of cricket by India at home.

“You know that and we have not played too many games in India in the last 2-3 years. I think we last played a Test (against a top team) in India against South Africa in 2019. When we practiced, we decided to focus on playing spin bowling. Because in India you get those wickets,” he said, and conceded that they have not had enough matches at home under their belt in recent years.

“When you play on spinning tracks, you have to play the line. It all about playing the line rather than thinking about it. Backing your defence and backing your ability on spinning and seaming wickets is the key.”

Rahane said the pitch talk has not affected the Indian players, saying they never complain about seaming tracks on overseas tours.

“Talk happening outside is not at all affecting Indian team,” said Rahane. “We are concentrating on what we have to do. When we tour we never complain about pitch.”

It was England’s second successive loss as they bowed out of contention for the World Test Championship final race, but Rahane said India would not be complacent.

“We respect England... They are a very good team, balanced team,” he said.

“We are not taking them lightly. It’s another Test match and we want to go out there and give our best. Equally England would want to give their best and look to win.”

India need a win or a draw to book a clash with New Zealand in the inaugural World Test Championship final and Rahane said they will go for an outright victory.

England opener Zak Crawley said the tour has been a “great learning curve” for up and coming players looking to make a mark.

“It’s a great learning curve, not just the on-field stuff but the off-field stuff,” said the Kent batsman, who stood out with his 53 in England’s first innings of the third Test.

“I’m fortunate I don’t have social media but I’ve heard from a few of the lads who do that quite a bit was said about that game,” he added.

“That’s one of the biggest differences to county cricket, dealing with exterior pressure people put on you and that you put on yourself because you want to do well.”

The 23-year-old Crawley said a good first innings total can make England bounce back on what he also believes would be a “similar pitch” from the previous match.

“There’s definitely a way back, we’ve already won one and we’re only one game down,” said Crawley, who smashed 267 in his maiden Test century against Pakistan last year.

“We had a great Test in the first. It’s going to require a good first-innings lead and that needs us to bat really well.”

Kohli is also the fourth most followed sportsperson on Instagram. Ronaldo tops the chart with 265 million followers, while Barcelona captain Messi and Brazil’s Neymar stand second and third in the list with 186 million, 147 million followers respectively.

Kohli had earlier become the first Asian to reach 75 million followers on Instagram.