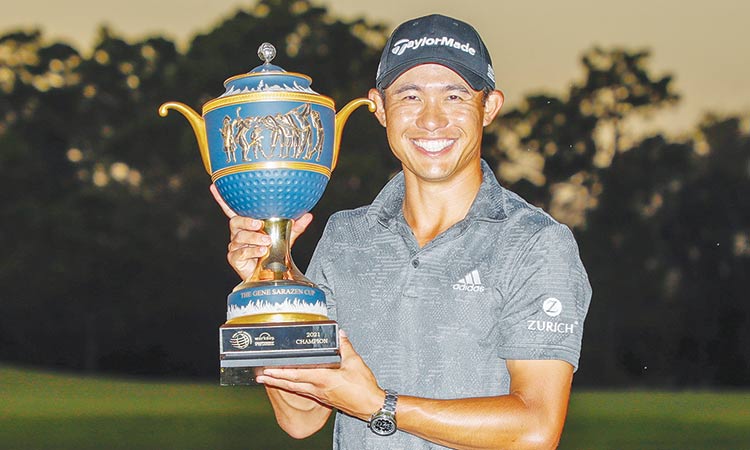 Collin Morikawa poses with the winner’s trophy after winning the World Golf Championships-Workday Championship in Florida on Sunday. Reuters

Collin Morikawa fired a three-under-par 69 to clinch a three-shot victory at the World Golf Championships-Workday Championship in Florida on Sunday.

The 24-year-old PGA Championship winner -- who led by two after Saturday’s third round -- relied on accurate iron play and nerveless putting to close out victory at the Concession Golf Club in Bradenton.

Morikawa’s final round saw him finish on 18 under with a 72-hole aggregate 270, three shots clear of Viktor Hovland, Brooks Koepka and Billy Horschel on 15 under.

After an early stumble when he bogeyed the par-four second, Morikawa recovered his composure to play flawlessly thereafter.

“It shows that I can come out here and compete,” Morikawa said after beating a strong field that included nearly every player in the world’s top 50.

Morikawa is now only the second player after Tiger Woods to win both a major and a WGC title before turning 25.

‘THANK YOU TIGER’: Woods is currently recovering in hospital in Los Angeles after a serious car crash on Tuesday left him with serious leg injuries.

The Los Angeles-raised Morikawa, who grew up idolising Woods, paid tribute to the stricken former world number one.

“Tiger means everything to me,” Morikawa said. “Yes, he had the crash and thankfully he’s okay and will make a quick recovery. But I don’t think we say thank you enough, so I want to say thank you to Tiger.”

Earlier, Norway’s Hovland had looked poised to challenge Morikawa at the top of the leaderboard after a wild round that included five birdies and a bogey on the front nine.

Two more birdies on the 12th and 13th holes put him at six under for the day but his charge stalled with bogeys on the 14th and 16th.

Koepka meanwhile was unable to put pressure on Morikawa over the closing holes when he missed an easy birdie putt on the 17th. Battling neck pain and stiffness since Saturday’s third round, Koepka closed with a two-under-par 70.

Rory McIlroy, Tommy Fleetwood, Phil Mickelson and Tony Finau were just some of the players who turned out wearing Woods’ iconic colour combo.

The 32-year-old from Pretoria, whose father died from COVID-19 in January, holed out from a bunker for a brilliant eagle two on the 17th before making a birdie on the last to seal victory at Rio Grande’s Grand Reserve Golf Club.

Grace, who carded a six-under-par 66 to finish on 19 under, later credited inspiration from his late father for his aggressive approach to the closing holes, where he needed to pick up shots to have any chance of overhauling clubhouse leader Jhonattan Vegas.

“My old man passed away not too long ago, and he always said I’m an aggressive player and I knew he was watching over me,” Grace said.

Grace’s remarkable finish was agonising viewing for Venezuela’s Vegas, who had looked to have done enough for victory with a seven-under-par 65 that included eight birdies and one bogey.

Vegas had led Grace by two shots going into the final two holes, only to be denied by the South African’s superb eagle two and closing birdie. Vegas finished on 18 under.

KORDA ROMPS TO GAINBRIDGE WIN: Nelly Korda produced a flawless final round to claim a three-shot victory at the Gainbridge LPGA tournament in Florida on Sunday.

Korda — whose elder sister Jessica won the LPGA Tour’s previous event, the season-opening Tournament of Champions in January -- fired a three-under-par 69 to finish on 16 under.

Korda’s 72-hole aggregate 272 left her three clear of Lexi Thompson and Lydia Ko who finished tied for second on 13 under.

World number one Ko Jin-young meanwhile finished five off the lead in fourth place on 11 under.

WOODS TWEETS THANKS:  Meanwhile, Tiger Woods, recovering in hospital after surgery for serious leg injuries received in a solo car smash, tweeted thanks Sunday for a show of support from fellow pro golfers.

“It is hard to explain how touching today was when I turned on the tv and saw all the red shirts,” the 15-time major champion said in a tweet.

“To every golfer and every fan, you are truly helping me get through this tough time.”