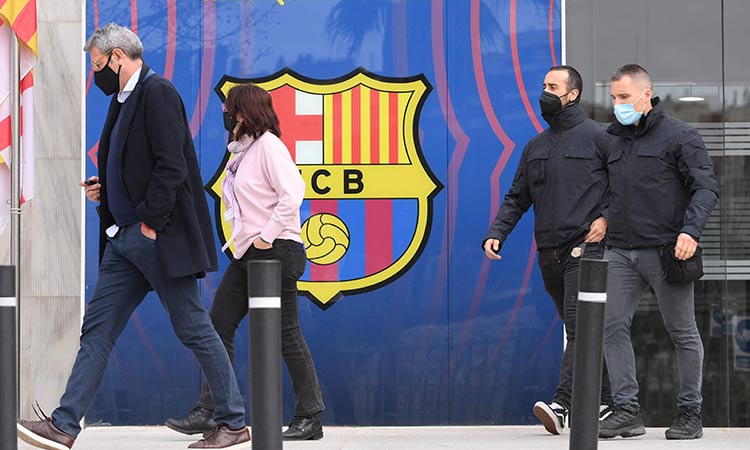 A regional police spokeswoman confirmed that several arrests were made following an investigation by the financial crimes unit of the force, without confirming the number of arrests made or their identity.

Bartomeu, who resigned as president in October, was among several arrests made just six days ahead of the club’s new presidential elections on Sunday.

Bartomeu, Masferrer, Grau and Gomez Ponti are being detained at the police station as part of the operation.

Barcelona released a statement confirming the operation is linked to last year’s ‘BarcaGate’ controversy, when the club was accused of covering up payments made to a company called I3 Ventures, hired to boost the image of then-president Bartomeu on social media. A Catalan police spokesman said on Monday morning “arrests are taking place” and said the operation was run by officers from the financial crimes unit.

Barca’s statement on Monday read: “Regarding the entry and search by the Catalan Police force this morning at the Camp Nou offices by order of the Instructing Court number 13 in Barcelona, which is in charge of the case relating to the contacting of monitoring services on social networks, FC Barcelona have offered up their full collaboration to the legal and police authorities to help make clear facts which are subject to investigation.

“The information and documentation requested by the judicial police force relate strictly to the facts relative to this case.”

Emili Rousaud, who resigned as Barcelona vice-president in March last year, said in an interview with RAC1 at the time: “If the auditors tell us the cost of these services is 100,000 euros and we have paid one million, it means someone has had their hand in the till.” The club took legal action against him.

Rousaud was among six Barca executives to leave their posts, with a joint letter citing the scandal as a key issue needing to be resolved.

Bartomeu maintained the company had been hired only to monitor posts on social media and announced an internal audit by PricewaterhouseCoopers, which cleared the club of financial corruption in July.

Yet Bartomeu resigned in October, avoiding a vote of no confidence triggered after more than 20,000 club members signed a petition against him. His departure came in the same month Barcelona announced losses of 97 million euros ($114 million) for last season and debts that had more than doubled to 488 million euros.

As well as a series of political blunders, Bartomeu had also overseen a dramatic decline in performances on the pitch and a personal falling-out with Messi, who tried to leave for free last summer.

Messi accused the club of “always juggling everything and plugging gaps” under Bartomeu’s leadership.

Bartomeu’s successor is due to be elected on Sunday, when club members will choose between the final three candidates, Joan Laporta, Toni Freixa and Victor Font.

“In light of events that took place today, we express our respect for the police and the judiciary, and we defend the presumption of innocence. And we deeply regret that these events diminish the reputation of the club,” said Laporta.

“Too many people want to hurt Barca,” wrote Freixa on Twitter. “We will not allow it.”

Neymar denies wrongdoing over Barca transfer, says he signs what his father tells him to

Neymar only signed documents his father gave him and did nothing illegal, the Brazil superstar told a Spanish court on Tuesday where he is on trial for alleged irregularities over his transfer to Barcelona nearly a decade ago.