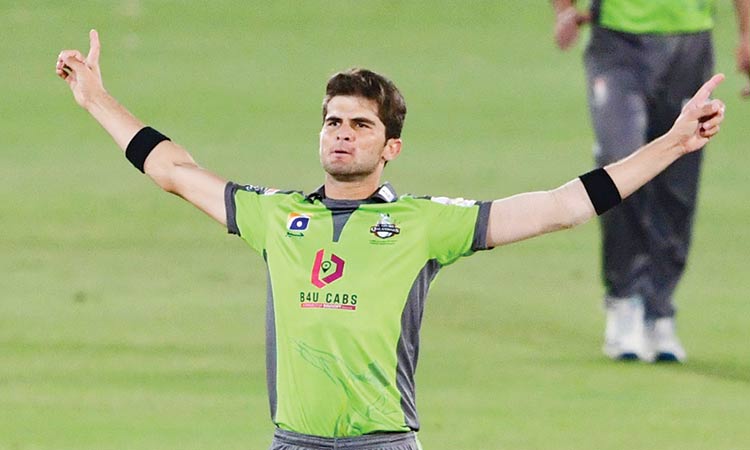 Chasing 187 to win, Qalandars found themselves in a spot of bother losing two wickets for no run in the first over. Mohammad Hafeez (15 off nine, one four, one six) was the next batsman to go as Qalandars were reeling at 33 for three in the fifth over.

Left-handed Fakhar was joined by another left-hander Dunk. Both contributed a 119-run partnership for the fourth wicket. Fakhar top-scored with a 54-ball 83. He smoked eight fours and four sixes.

Requiring 30 runs from two overs, the right handed Wiese got two fours off Mohammad Amir before he smashed a six in the penultimate over, as Qalandars collected 20 runs and brought down the equation to 10 required off the final over.

Dunk (57 not out off 43, five fours, two sixes) and Wiese (31 not out off nine, three fours, three sixes) contributed an unbeaten 47-run partnership for the fifth wicket.

Earlier, half-centuries from Sharjeel Khan and Mohammad Nabi helped Kings post 186 for nine. After being put into bat, Kings had a wobbly start, as they lost their premier batsman Babar Azam –the top run getter in HBL PSL –for five, to a scorching in-swinging delivery from Shaheen Afridi. Joe Clarke (four off six, one four) and Colin Ingram (0 off one) were next to follow Babar with scoreboard reading at 37 for three at the end of fifth over.

Sharjeel, who got a life in the first over of the match, made full use of his dropped catch, as he punished Qalandars bowlers all around the ground, and struck five fours and six towering sixes in his innings of 64. He was equally supported by Afghanistan’s Mohammad Nabi, who scored his first half-century in the HBL PSL 6. He contributed 57 off 35 balls, hitting four fours and three sixes. Both batsmen knitted 76 runs for the fourth wicket partnership.

After the departure of Nabi, Kings managed to add only 24 runs in the last four overs, and ended up scoring 186 for nine.

For Qalandars, Shaheen was the most successful bowler, taking three wickets for 27.

Meanwhile, South Africa fast bowler Dale Steyn has hit out at a commentator for comments about his hairstyle during a PSL match on Friday. Steyn took to social media to share a sharp message and urged the broadcaster to just focus on his job.

Steyn had gone through a makeover and is sporting the new look at the Pakistan Super League where he plays for Quetta Gladiators.

The incident happened during Saturday’s PSL match between the Gladiators and Peshawar Zalmi when Doull was heard saying “mid-life crisis with that hair” while his fellow commentator remarked “lockdown hair” while the cameras were focussing Steyn in the dressing room.

Steyn took to social media and urged his fans to identify the commentator who had made the remark about his hair. After a fan posted a video of the clip which has gone viral, the Proteas pacer had a message for Doull.

“If your job is to talk about the game, then do that,” Steyn said in a Twitter post.

“But if you use that airtime to abuse anyone for their weight, sexual choices, ethnic backgrounds, lifestyle etc or even hairstyles, then im afraid I have no time for you as a human. You and anyone else like that to be fair.

“That’s all I have to say. It was a great time last night, fantastic to play in front of crowds again, cricket is so much better that way. We lost but hopeful to pull it together in our remaining games,” he added.