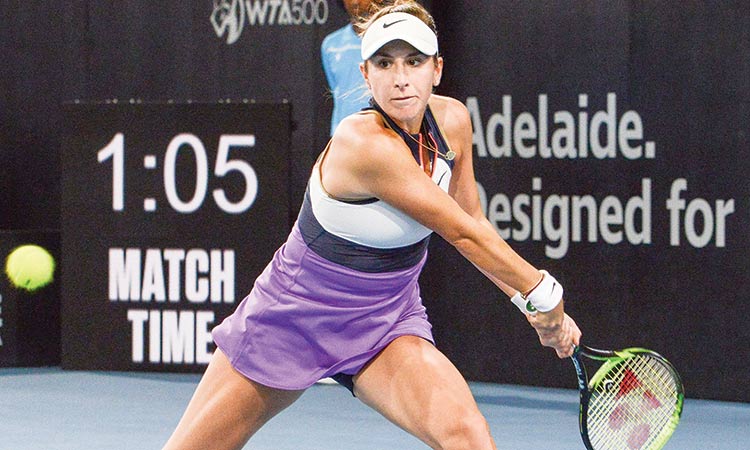 Belinda Bencic hits a return against Coco Gauff during their semi-final match of the Adelaide International tournament on Friday. Agence France-Presse

Second seed Belinda Bencic battled for almost three hours before seeing off 16-year-old American Coco Gauff in three sets on Friday to reach the final of the Adelaide International.

Fifth seeded Swiatek had a much easier passage to the final, beating Swiss player Jil Teichmann 6-3, 6-2.

Bencic went into the semi-final against Gauff as favourite, but the young American has been in good form this week, winning through two rounds of qualifying just to make the main draw.

And the teenaged Gauff got away to a superb start, breaking Bencic’s opening service game and racing away to a 3-0 and 4-1 lead.

But the former world number four began to find her range and reeled the young American in, breaking back and getting the set back on terms.

The opening set went to a tiebreak and Bencic had all the momentum, winning it comfortably and wrapping up the first set in 58 minutes.

Bencic took that momentum into the second set, breaking Gauff early while holding her own serve easily.

But serving for the match at 5-3, Bencic stumbled and Gauff pounced, breaking back to get the set back on serve and taking it to a tiebreak, holding on to level the match at one set apiece.

But the third set was all Bencic as she took advantage of her fatigued opponent to race away with the match and reach her 11th WTA final.

“I’m super relieved -- I tried to fight the best that I can,” she said.

“She really gave me a hard time. At times I didn’t know what to do but I’m really happy to win and get through to the final.”

Earlier, Swiatek had too much power for her Swiss opponent, winning 6-3, 6-2 in 81 minutes to reach the third final of her career.

Swiatek, the tournament’s fifth seed, said she felt comfortable on the Adelaide courts.

Mannarino crashes out of Singapore Open: Top seed Adrian Mannarino was dumped out of the Singapore Open Friday after the Frenchman suffered a 6-3, 6-4 quarter-final defeat to Moldova’s Radu Albot.

Mannarino, who had beaten Albot in their only previous encounter in Sofia last year, could not repeat that feat again as the Moldovan was clearly at his best. Despite enduring a gruelling contest where he saved three match points against Germany’s Yannick Hanfmann in the second round on Thursday, Albot did not appear fatigued.

“I was ready for today’s match. I’m used to playing many matches, so my body is used to that already. I was just trying to fight and I survived,” he said.

Albot looked set to win the second set comfortably after cruising to a 5-1 lead before Mannarino staged a comeback. But Albot fired five aces, with two coming crucially in his last game, to defeat the Frenchman and set up a semi-final clash with Alexander Bublik of Kazakhstan.

“I was very aggressive with my serve today and also feeling confident. I just kept things simple and did all the right things today,” said Albot.