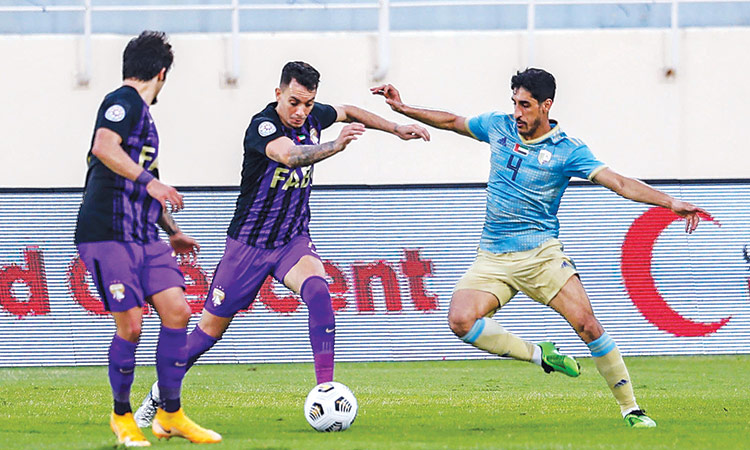 Players of Al Dhafra and Al Ain fight for the ball during their Arabian Gulf League match on Thursday.

Makhete Diop scored a goal in each half to hand Al Dhafra a valuable 2-1 victory over Al Ain at Hamdan Bin Zayed Stadium in matchweek 18 of the Arabian Gulf League.

Diop broke the deadlock in the 34th minute, as the Senegalese forward handed the home side a 1-0 advantage.

Al Ain made a comeback after they were awarded a penalty only five minutes after the restart. Laba Kodjo found the back of the net to get the Boss back into the game and level the scoreline at 1-1.

Al Dhafra were awarded a penalty kick in the 75th minute but Pedro Conde’s effort hit the woodwork. However, the hosts were handed another chance to take the lead when they were awarded another penalty just two minutes later. Diop was at the center of action once more as he stepped up and scored from the spot what turned out to be the winner.

Al Dhafra ended their seven-game winless streak and raised their tally to 20 points. They halted Al Ain’s march towards the third place as they temporarily sit fourth on 30 points.

Mlapa stars in Kalba win: Ittihad Kalba put in a dominant second-half performance to cruise past hosts Fujairah 3-0 in another match of the day.

After reviewing the VAR, the guests were awarded a penalty kick in injury time for a handball. Peniel Mlapa stepped up and converted from the spot to hand his side a 1-0 advantage ahead of the break.

The Tigers kicked off the second half in a strong manner, as they doubled their lead only eight minutes after the restart. Davide Mariani’s effort found Mohamed Subil and the latter found the back of the net to make it 2-0.

Ittihad Kalba went in search for a third goal but were repeatedly denied by keeper Saleh Rabei. They eventually found the back of the net when Mlapa netted his second of the night in the 87th minute to seal a 3-0 win.

Meanwhile, the action resumes on Friday when Al Nasr, who are fifth on 30 points, welcome bottom-placed Hatta at Al Maktoum Stadium. Considering their league standings, it may seem like an easy task for fifth-placed Al Nasr. However, Hatta’s most recent performance against Shabab Al Ahli, which saw them suffer a late 2-1 defeat, shows that the Blues may face difficulty collecting the three points, as they seek to enter into the top three.

Bani Yas will be hosting Ajman in a top-versus-bottom clash at the same time. The home team enter the game on the back of a thrilling 3-3 draw with Al Jazira.

The Sky Blues look to close on the four-point gap on Al Jazira and Sharjah, who will face off later on Friday. At the other end of the table, the Oranges are in dire need of the three points as they currently sit in the relegation zone with nine points.

Shabab Al Ahli will be targeting to edge closer to the top four when they face Khorfakkan at Rashid Stadium at 20:15 pm. The hosts’ recent performances allowed them to climb up to sixth place on 29 points. Khorfakkan’s motives are completely different as the guests need to end their winless streak which left them in the 11th spot with 15 points only.

All eyes will be at Sharjah Stadium, where Sharjah and Al Jazira, the top two teams on the standings, will fight it out in a game that might prove pivotal in the title race. The winner of the top-of-the-table showdown will move three points clear at the top, as they are both currently tied on 37 points, with the King having the edge by the virtue of a head-to-head record.

Besides fighting for the top spot, the King will be looking to return to winning ways after collecting two points only in their past three matches, as they drew with Al Wahda and Al Dhafra and lost to Al Ain. They will, however, have a tough task ahead as they clash with the Pride of Abu Dhabi who are the highest-scoring team in the league so far with 45 goals and are tied with Bani Yas as the strongest defense after conceding 17 goals only.

Al Jazira will also be looking to avenge their 1-0 defeat to the King in matchweek 5 and bounce back after their most recent draw with Bani Yas. The competition extends to the top goalscorer race, as Welliton Soares looks to reduce the three-goal gap with leader Ali Mabkhout, who has 15 goals to his name so far. 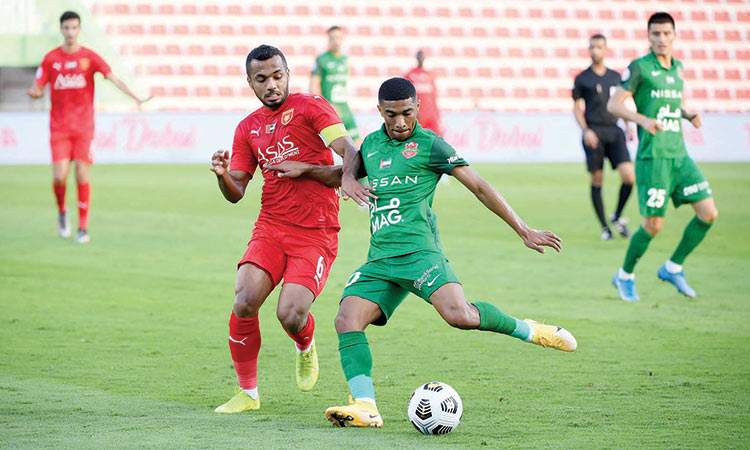