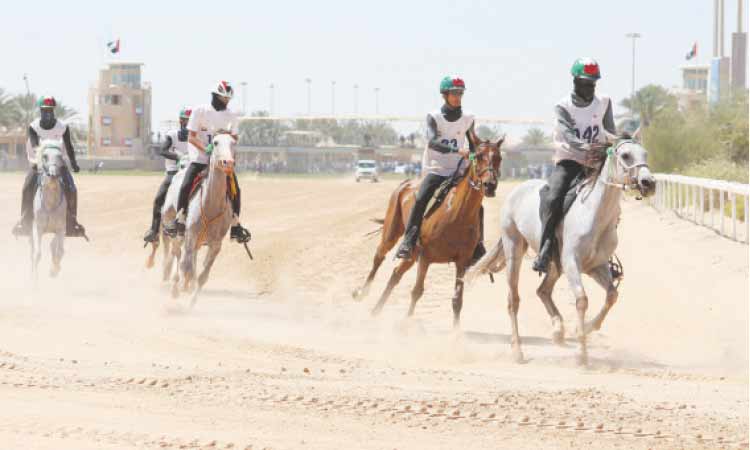 The 120km Dubai Crown Prince Endurance Cup will be the final ride in a week-long Endurance Festival and is expected to feature renowned pairings from around the globe. Courtesy: Twitter

Hosted by the Dubai Equestrian Club, the festival will be held from Feb.24-27, 2021, and comprises a total of four rides, catering to a wide range of riders and horses—including female riders and mares—adding variety to this celebration of endurance riding. The festival is sponsored by Pillar Partner Emirates Airline, and held at Dubai International Endurance City, a purpose-built, state-of-the-art endurance facility.

Named after the mare the Crown Prince rode to win the 2014 World Equestrian Games Endurance gold medal in France, the Yamamah Endurance Cup is another ride of special significance in the festival.

The finale, the 120km Dubai Crown Prince Endurance Cup sponsored by Emirates Airline, will be flagged off on Saturday, and is expected to feature renowned pairings from around the globe. The safety of the riders and horses is at the heart of all events hosted by the Dubai Equestrian Club, and therefore every effort has been made to follow government health regulations regarding COVID-19, including the mandatory wearing of masks, social distancing as well as regular sanitisation of the venue and facilities.

The festival is an important stop on the Arab endurance calendar and draws inspiration from Sheikh Hamdan and his continuous efforts to help develop and grow a sporting culture in the region.

The Dubai Crown Prince Endurance Festival is a significant platform for local riders to learn and observe, while also testing their craft against some of the best international athletes.

Boutros, Divisional Senior Vice President, Corporate Communications, Marketing & Brand at Emirates Airline, said: “Emirates is proud to again be sponsoring the Dubai Crown Prince Endurance Cup. We have been committed to supporting the growth and development of horse racing and equestrian sports in our home base of Dubai.

“Endurance riding has historical significance all over the world and here in the UAE. Its intense test of horsemanship challenges the ability and stamina of both the horse and rider to complete the rigorous terrain. Emirates is delighted to support this event and we are confident that this year’s race will be extraordinarily successful in spite of the challenges, with a focus on the safety of all involved.”

Major General Dr Ahmed Nasser Al Raisi, President of the Emirates Equestrian and Racing Federation, affirmed that the Dubai Crown Prince Endurance Festival is one of the most important events held in the country.  “The Dubai Crown Prince Endurance Cup race bears the name of a first-class international rider, Sheikh Hamdan Bin Mohammed Bin Rashid Al Maktoum, Crown Prince of Dubai and Chairman of the Dubai Executive Council, who has enriched local races with his participation and presence among the UAE riders and fans. Sheikh Hamdan has also achieved international titles and gold medals, allowing the UAE flag to fly high on podiums across the globe. By excelling in a variety of sporting disciplines, Sheikh Hamdan is a role model and icon for the UAE youth.’’ Raisi said.

“The contributions of Sheikh Hamdan to endurance riding and his love for horses are an extension of the commitment and devotion of His Highness Sheikh Mohammed Bin Rashid Al Maktoum, Vice President and Prime Minister and Ruler of Dubai. May God protect him, ‘Faris Al Arab’; who offers the UAE his insightful ideas for the sustainability of a high quality of life, and for supporting equestrian sport for decades with a vision that does not accept anything but the very best.

“His efforts have allowed the UAE to play an important role in global leadership, and offered the sons and daughters of the UAE a multitude of opportunities in all fields, while providing guidance for the riders to march towards glory”.