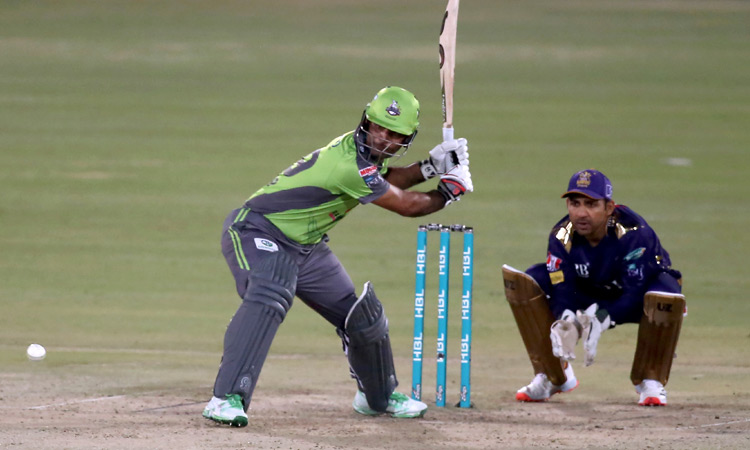 Fakhar Zaman plays a shot as Sarfaraz Ahmed looks on during the PSL match at the National Stadium in Karachi on Monday. AP

Fakhar Zaman and Mohammad Hafeez put up a sublime batting performance to steer Lahore Qalandars to a nine–wicket victory over Quetta Gladiator in their Pakistan Super League (PSL) match on Monday.

Chasing a fighting total of 179, both the batsmen took Qalandars over the line for the loss of just one wicket with 10 balls to spare. With the victory, Qalandars have notched up second consecutive win the league.

Zaman scored an unbeaten 52-ball 82 while Hafeez smashed a quick-fire 73 off 33 deliveries with the help of five boundaries and six sixes.

Earlier, Chris Gayle was at his brutal best as the swashbuckling batsman smashed a 40-ball 68. He also shared a 101-run partnership for the third wicket with former Pakistan skipper Sarfraz Ahmed to anchor the faltering innings.

Gladiators got off to a stumbling start and lost both the openers Tom Banton and Saim Ayub with just 12 runs on the board. Gayle came out in the middle and starting hitting the bowlers in his trade mark style to take off the pressure and turn the heat back on Qalandars.

He along with Sarfraz added 101 runs to set the tone for a big total and bring the Gladiators back in the game.

Both the batsmen toyed with Qalandars’ bowling attack at free will and send all the loose deliveries out of the boundary rope. The West Indian hit five sixes and as many boundaries during his stay at the crease. He was ably supported by Sarfraz, who also 40 off 33 balls with the help of five fours.

After the departure of Gayle, Gladiators lost two wickets in quick successions, which put a brake on the run rate. But, Nawaz Khan played a cameo of 20-ball 33 to spur the run rate take the score to a fighting total.

Harris Rauf was the most successful bowler as he returned with a figure of 3-38.

Meanwhile, “Arshad Iqbal is the most-improved fast bowler on the national circuit in the last 12 months,” said legendary Pakistan paceman Wasim Akram ahead of the HBL PSL 6.

The 20-year-old from Swabi cannot get a better compliment from one of the best left-arm pacers the game has ever seen and has impressed the fast bowling legend with his work ethic and commitment.

Arshad says he is lucky to have Wasim in the dugout and credits his success to him. The presence of Mohammad Amir in the side has also benefited him.

“Wasim bhai and Amir bhai are great players,” said an unassuming Arshad. “Wasim bhai is a legend and I have seen his bowling videos on YouTube. Getting his advice is a treasure. I am learning and his words are morale boosting. While on the field, Amir bhai keeps telling me what to do.”

Arshad made his mark at the junior level in the ICC Men’s U19 Cricket World Cup in New Zealand in 2018. He took six wickets in five matches, but got overshadowed by Shaheen Shah Afridi, who ended the tournament as Pakistan’s highest wicket-taker in the tournament. 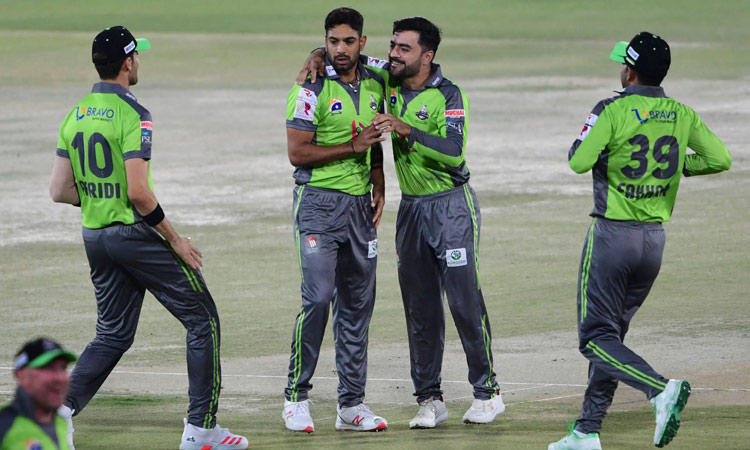 Haris Rauf (2L) celebrates with teammates after taking the wicket of Ben Dunk (not pictured). AFP

On his first-class debut in October 2018, Arshad took five wickets. That performance got him drafted as an emerging player in the HBL PSL 5 player draft and during the season he made an instant impact by providing his team, Karachi Kings, crucial breakthroughs and putting a lid on the flow of runs.

He finished that edition with nine wickets in seven matches.

“I was satisfied [with my performance in the last season] because everyone was praising my progress,” he said.

His economical spells played a crucial role in helping Khyber Pakhtunkhwa clinch the National T20 Cup as the pacer gave away 6.25 runs in the tournament and took four wickets.

He played a pivotal role in helping Kings lift the glittering HBL PSL trophy for the first time as he accounted for in-form Lahore Qalandars’ batsmen Ben Dunk and Samit Patel in the final of the fifth edition in November last year.

The fact that the ICC Men’s T20 World Cup will be played later in the year adds further significance to this edition of the HBL PSL.