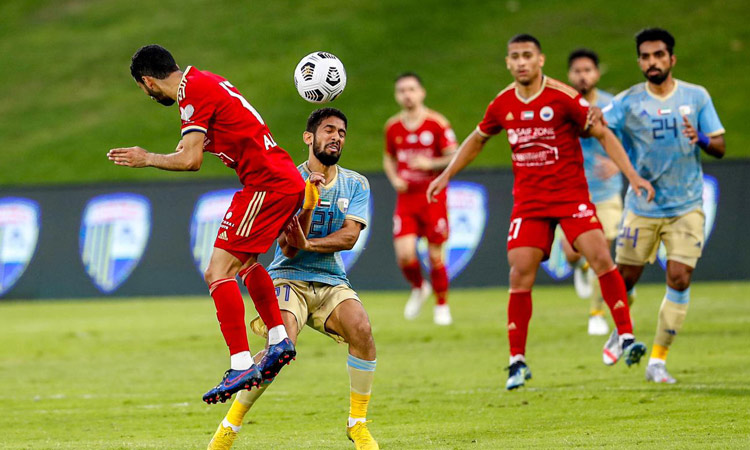 Al Dhafra and Sharjah player in action during their AGL match.

There were goals galore in the crucial Arabian Gulf League matchweek 17 game between top spot aspirants Al Jazira and third-placed Bani Yas at the Mohamed Bin Zayed Stadium in Abu Dhabi on Thursday.

In the end, the visitors, despite a brilliant brace from their Argentine medio Nicolas Gimenez, were held to a thrilling 3-3 draw by The Pride of Abu Dhabi 3-2, courtesy of a goal in the 4th minute of injury time by Nigerian forward Imoh Ezekiel after their star forward Ali Ahmed Mabkhout muffed a penalty a minute earlier.

Two early goals in the 9th and 14th minutes got Al Jazira to a flying start. With the all-important first place on the table at stake, Curacao forward Brandley Kuwas got The Pride of Abu Dhabi their opening goal of the night after connecting a pass from Emirati playmaker Khalfan Mubarak.

Hardly five minutes later, Bani Yas goaltender Fahad Mohamed saw another go past him into the net when UAE star forward Mabkhout — carrying his goal-scoring form into this match after his hat-trick in his side’s 6-0 win over Ittihad Kalba last week — netted the team's second on the night to put Al Jazira 2-0 up after 14 minutes into the first half.

Things heated up considerably in the cool winter evening after resumption with two goals in two minutes for Bani Yas. Barely three minutes into the second half, Gimenez restored parity for the visitors and followed it up almost immediately with another goal in the very next minute with help from team-mate Suhail Al Noobi.

Bani Yas looked to have the match all stitched up but after Al Jazira missed to equalise as Mabkhout missed from the penalty spot, Ezekiel restored parity with his last-gasp goal.

After this match the Sharjah stay on top with 37 points from 17 matches, sharing the spot with Al Jazira.

In the other late match, bottom club Hatta were hosting Shabab Al Ahli Dubai at the Sheikh Hamdan Bin Rashid Al Maktoum Stadium. The hosts successfully defended their citadel and the score at lemon time was 0-0.

In fact, they went ahead in the 58th minute. However, being reduced to 10 men with the ejection of defender Yousuf Habib, Shabab Al Ahli wrapped up the match with 2 goals in the 86th and 87th minutes from Yahya Alghassani and Mohammad Juma Eid respectively.

Earlier, Sharjah handed Al Jazira a golden chance to climb at the top of the AGL table after they were held to a 1-1 draw by Al Dhafra at Hamdan Bin Zayed Stadium on the opening day of matchweek 17 on Thursday.

Both sides created a couple of good chances in the early stages of the game, as they piled up the pressure on the opponents’ defence. The King, however, were the better side for large periods of the first half but failed to pose a real threat to the hosts' goal. It wasn't until the 32nd minute when the guests broke the deadlock.

Welliton Soares latched onto the rebound and fired home to hand his side a 1-0 lead. Sharjah’s lead was, however, short-lived as Pedro Conde netted the equaliser three minutes before the break after converting from the spot.

Senani was the hero when he denied Caio's header with less than 20 minutes to go, as the game ended in a 1-1 draw, which is the first draw between Sharjah and Al Dhafra since 2017. Al Dhafra earned their first point after three consecutive defeats.

With the drawn tie against Al Dhafra and with Al Jazira being held by third-placed Bani Yas, Sharjah with with 37 points, stay above Al Jazira at the top by virtue of head-to-head result.

After losing the Bur Dubai derby, Al Nasr returned to winning ways with a comfortable 3-0 win over Ajman at Rashid Bin Saeed Stadium on Thursday in matchweek 17 of the Arabian Gulf League.

Al Nasr headed into halftime with a 1-0 advantage, thanks to an own goal after Diaa Saba’s effort deflected off Ajman defender Abdulrahman Rakan and into the net just 12 minutes into the game.

Ryan Mendes got his name on the scoresheet eight minutes after the restart, as he capitalized on a defensive mistake and tapped the ball home to make it 2-0.

The 31-year-old put the win beyond any doubt when he completed his brace following an individual effort in the 86th minute.

Al Nasr forward Sebastian Tagliabue found the back of the net deep into injury time but his effort was ruled out for offside after reviewing the VAR.

This marked Al Nasr's first win with Argentine coach Ramón Díaz at the helm. The Blues raised their tally to 30 points and moved into top four temporarily.

Meanwhile, Ajman remain in 13th place after succumbing to their 12th defeat this season. 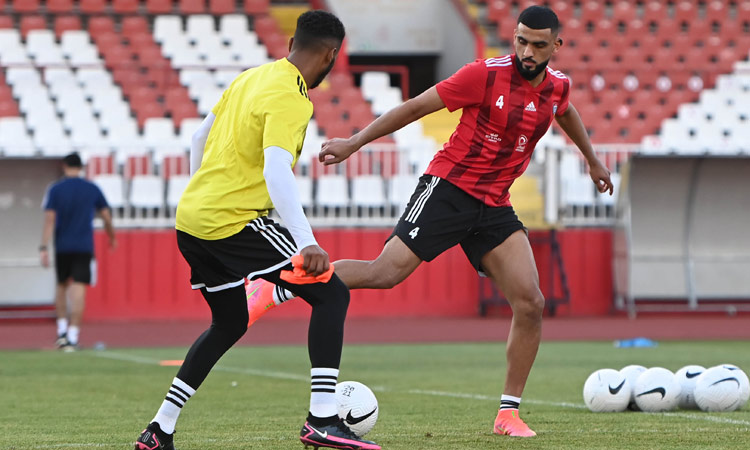 The UAE preparatory camp has been marred by the injury of the frontline players like Fabio Lima and Ali Salmeen. The duo of Salmeen and Lima had to leave the camp after picking up injuries.