Djokovic downs Zverev to set up semis showdown against Karatsev 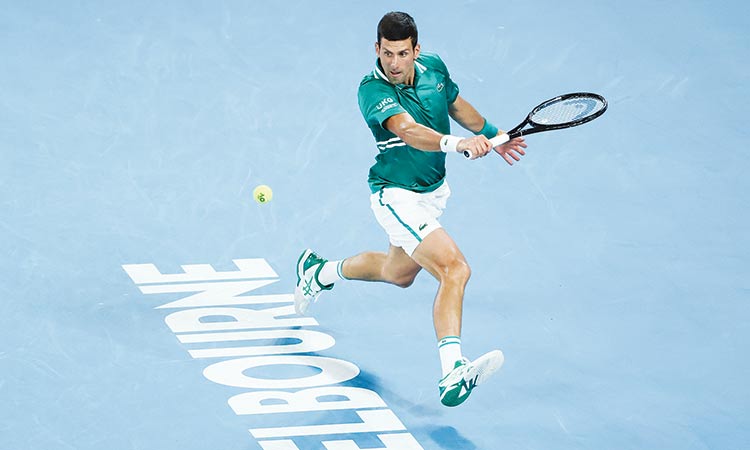 Novak Djokovic smashed his racquet to bits and then swept Alexander Zverev out of the Australian Open as the defending champion followed Serena Williams and Naomi Osaka into the semi-finals on Tuesday.

Djokovic will be hot favourite to reach Sunday’s final when he plays Russian qualifier Aslan Karatsev, who continued his dream run with a 2-6, 6-4, 6-1, 6-2 win against injured Bulgarian Grigor Dimitrov.

After destroying his racquet as he slipped behind in the third, Djokovic recovered brilliantly to take the set and he was ice-cool on the big points, drilling an ace to seal the decisive tiebreaker.

“Down to the very last shot it was anybody’s match,” said the 33-year-old Serb.

“A lot of nerves out there, a lot of pressure. Emotionally I feel a little bit drained, honestly.”

The Serb remains on track for a record-extending ninth Australian Open title and 18th Grand Slam trophy, nipping at the heels of rivals Roger Federer and Rafael Nadal, who both have 20.

Earlier, Serena took a step towards a record-equalling 24th Grand Slam title with a 6-3, 6-3 dismantling of second seed Simona Halep, her nemesis in the 2019 Wimbledon final.

Serena, 39, said her level was improving ahead of her meeting with Japan’s Osaka, who came out on top in their tempestuous 2018 US Open title match.

“Definitely think this is the best match I have played this tournament, for sure,” said the 10th seed.

“Obviously I had to, going up against the number two in the world, so I knew I had to do better.”

“I just realized I was making a lot of unforced errors in those games that I lost. And I knew that I had an opportunity to play better,” said Serena, now two wins away from claiming her record-tying 24th major singles championship. “So I was just like, ‘Just stay in there. You just can keep going.’ And that’s what I just did.”

Meanwhile, Halep said she would leave the Australian Open with her head held high despite a quarter-final exit but was a little frustrated at her negativity on court during the tournament.

“My feeling after this match is that I was not that far (away) but she was stronger in the important moments,” she said.

“I had 3-1 in the second set and my serve didn’t help me much, so I have to be a little bit stronger on the serve, but it didn’t work today.

“In my opinion, I had a good game tonight. I’m not that disappointed with myself.”

“I have been complaining a little bit too much, I think. But tennis-wise, I think I did a good job. I worked hard in the off-season and here I could see how much I improved in some things. So I’m positive about that and I have confidence.”

‘Intense’ Osaka: Their semi-final promises much after Osaka, the reigning US Open champion, looked in formidable touch in her 6-2, 6-2 win over Taiwan’s Hsieh Su-wei.

Displaying great focus against the awkward Hsieh, ranked 71 and playing her first Slam quarter-final aged 35, Osaka hit 24 winners and was detained on Rod Laver Arena for only 66 minutes.

“I told myself just to be really intense from the beginning,” said the Japanese star, the reigning US Open champion.

The 27-year-old has knocked out three seeds as he became the lowest-ranked player to reach a major semi-final after world number 125 Goran Ivanisevic at Wimbledon in 2001.

After a five-setter with Felix Auger-Aliassime in round four, Karatsev had an easier ride against Dimitrov who was wincing with pain from the third set.

The Bulgarian 18th seed, who was barely able to serve because of back spasms, took a medical timeout, but his movement was always hampered and he limped off the court after Karatsev’s win.

Karatsev becomes only the second qualifier to reach the Australian Open semi-finals after Bob Giltinan in 1977.

He was one of three Russians to reach the quarter-finals, with Daniil Medvedev and Andrey Rublev set to play each other on Wednesday.