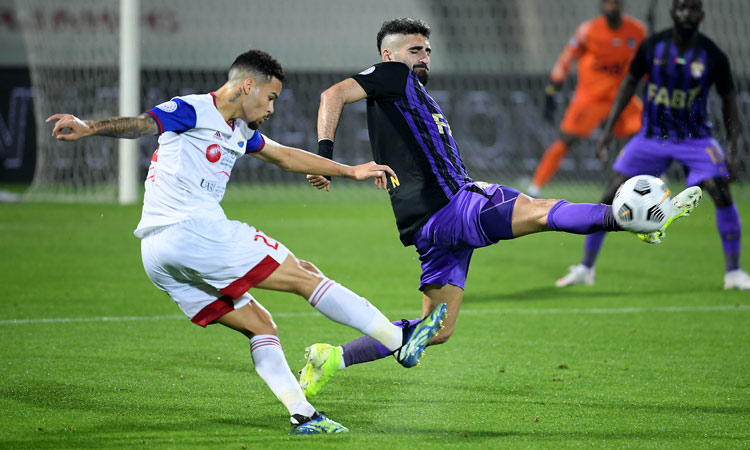 Sharjah and Al Ain players in action during their AGL match on Saturday.

Ali Mabkhout smashed a hat-trick as Al Jazira thrashed Ittihad Kalba 6-0 in an away 16th round match of the Arabian Gulf League (AGL) on Sunday. The hosts took a lead as early as in the fifth minute to go 1-0 up. They added three more goals to end their first-half 4-0.

Abdulla Idrees opened the scoring for Al Jazira in the 5th minute, before Ali Mabkhout doubled their lead five minutes later. Khalfan Mubarak got his name on the scoresheet after an impressive individual effort in the 21st minute. Only five minutes later, Khalifa Alhammadi scored the fourth goal, as the Pride of Abu Dhabi headed into halftime with a 4-0 lead.

Mabkout needed only six minutes after the restart to net his second of the night. He completed his hat-trick during injury time to seal a 6-0 win for Al Jazira.
Mabkhout currently tops the goalscoring charts after raising his tally to 14 goals this season. 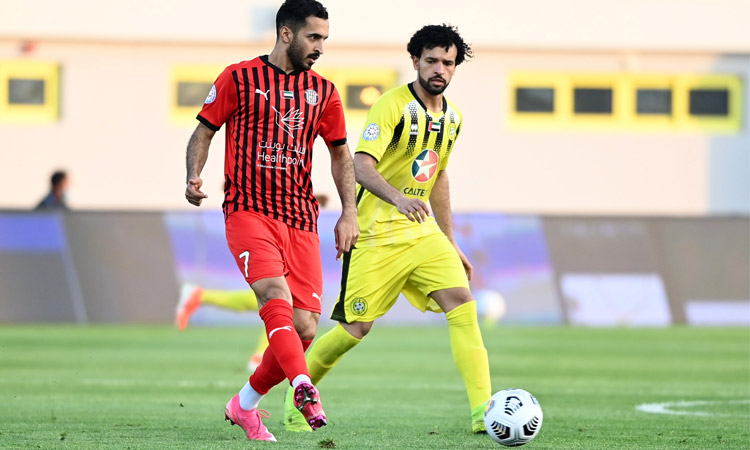 Al Jazira's Ali Mabkhout vies for the ball with an Ittihad
Kalba player during their AGL match on Sunday.

Elsewhere, Fujairah came from behind to earn a 4-2 victory over nine-man Al Dhafra at Fujairah Stadium on Sunday. Al Dhafra grabbed an early lead after they were awarded a penalty in the eighth minute, with Pedro Conde converting from the spot. The Spanish forward doubled the guests' lead in the 35th minute after netting another penalty.

Kristiano Samuel pulled one back for Fujairah after sending the ball home off a rebound, as Al Dhafra headed into the break with a 2-1 advantage.

The second half was a different story, as Al Dhafra suffered a huge blow when Issam El Adoua was sent off in the 57th minute and keeper Abdulla Sultan was shown a red card two minutes later, forcing their side to continue the game with 9 men.

Fujairah capitalised on Al Dhafra's numerical disadvantage as Ahmed Suliman netted the equalizer in the 62nd minute. Samuel completed his brace and handed the hosts the lead after converting from the spot five minutes later.

Substitute Ali Eid put the game to bed when he scored Fujairah's fourth goal in the 95th minute to hand his side a 4-2 win. Fujairah are now 12th on 10 points, six points below Al Dhafra who sit in 10th place.

All the while, after failing to get a win for 15 matches, Hatta defeated Ajman 3-0 at the Hamdan Bin Rashid Al Maktoum Stadium to earn their first win of the season.

While the first half ended in a 0-0 draw, the second half was a different story, as Hatta netted three goals. The home side broke the deadlock seven minutes after the restart. The home side were awarded a penalty after Abdulla Kazim was brought down inside the box.

Jonathas, who is currently on loan from Sharjah, converted from the spot to hand Hatta a 1-0 lead. After reviewing the VAR, Hatta were awarded a second penalty and Jonathas made no mistake to double his side's lead in the 82nd minute.

Deep into injury time, Hatta extended their lead as they launched a counterattack, which saw Nahir Besara's cross find Ahmad Malallah who tapped past the Ajman keeper to seal his side a 3-0 win.

Earlier, Al Ain came from behind to defeat leaders Sharjah 2-1 at Sharjah Stadium on Saturday night. The first chance of the game fell to Al Ain’s Wilson Eduardo, as his long-range effort sailed wide of goal. On the other hand, Sharjah were more decisive as they broke the deadlock on the 10-minute mark, thanks to Caio Lucas’ opener.

The home side launched a quick counterattack and the ball fell to the Brazilian midfielder who sent a left-footed strike into the bottom corner of the net. Igor Coronado missed a valuable chance to double Sharjah’s lead before the half-hour mark, as his effort lacked accuracy and landed inches wide.

Sharjah keeper Darwish Mohamed was called into action as he pulled off a fine save to deny Khalid Al Blooshi’s strike from outside the box. As the King seemed to be headed into the break with a 1-0 lead, Yahia Nader netted the equalizer in injury time, as he fired a powerful long-range effort that hit the woodwork before settling into the back of the net, leaving Sharjah keeper helpless. 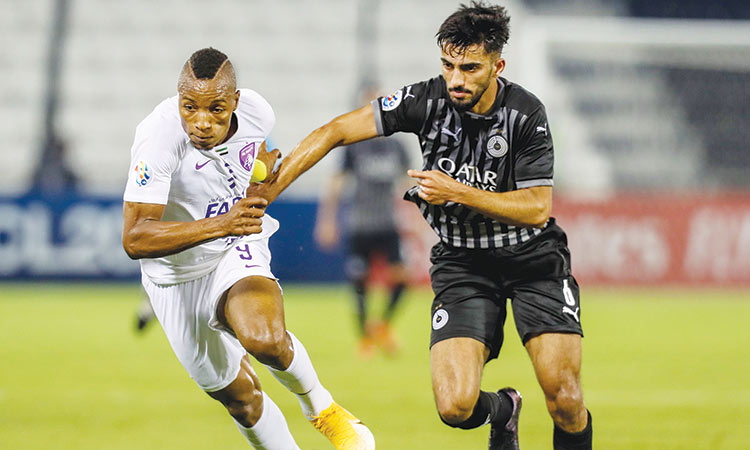 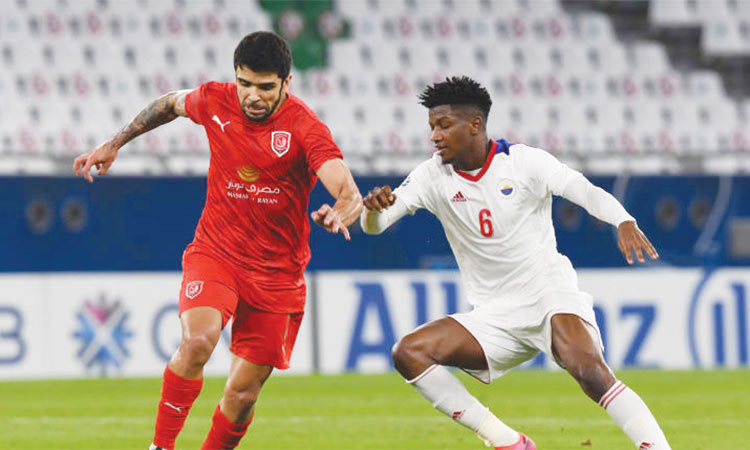