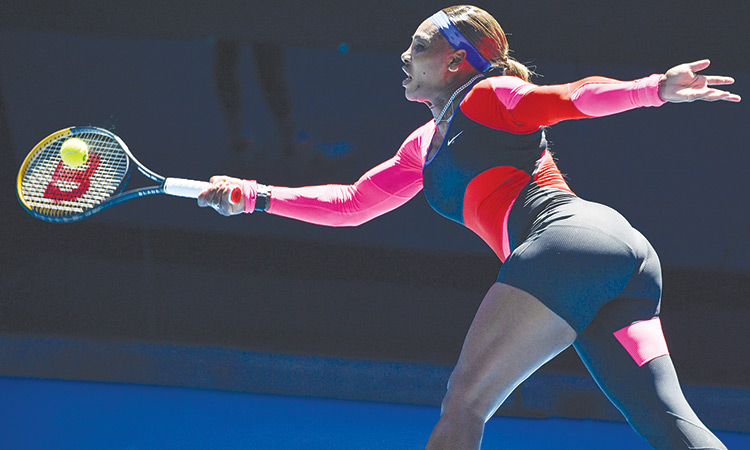 Serena Williams returns to Nina Stojanovic during their Australian Open second round match in Melbourne on Wednesday. Agence France-Presse

Women’s favourite Naomi Osaka also sailed through despite premonition of a defeat in a ‘bad dream’, but fellow major winners Stan Wawrinka, Bianca Andreescu and Petra Kvitova were all shown the door in second-round matches.

Among the late matches, Aussie crowd-pleaser Nick Kyrgios served underarm, smashed a racquet and rowed with the chair umpire before coming from behind to beat France’s Ugo Humbert in five gripping sets.

“I was fortunate to get through the third set today, it was anybody’s game,” said the defending champion, after his win in hot conditions in Rod Laver Arena.

The top seed looked in control after taking the first set, but lightning-quick Tiafoe, who reached the quarter-finals two years ago, refused to go away.

The American bounced back to take a close second set but imploded as tensions rose in the fourth, receiving a code violation for an audible obscenity as Djokovic took charge.

The Serb is targeting a record-extending ninth title and his 18th Grand Slam trophy overall as he snaps at the heels of Rafael Nadal and Roger Federer, who top the all-time list with 20 each.

“I hesitated a little bit when I had the match point and I lost it,” said the 35-year-old Swiss, a three-time Grand Slam winner.

Osaka, whose three Grand Slam titles include the 2019 Australian crown, had no such trouble in her evening match against France’s Caroline Garcia -- despite fearing defeat after a bad dream.

Second seed Simona Halep survived a scare when she reeled off five third-set games in a row to avoid defeat by Australia’s Ajla Tomljanovic.

“I fought till the end. I never gave up during the match, and that’s why maybe I could win in the end,” said the two-time Grand Slam winner.

“I’m here to have fun and it’s great to be playing in front of a crowd,” said Williams.

With Australia virtually virus-free, the tournament is welcoming the biggest Grand Slam crowds since the pandemic, although attendances are well down on previous years.

‘KYRGIOS LOST FOR WORDS’: A socially distanced John Cain Arena was rocking for the Kyrgios match, where the unseeded home favourite denied Humbert what seemed like a certain win to set up a clash with US Open champion Dominic Thiem.

“I don’t even know what to say, I’m lost for words. That is one of the craziest matches I’ve ever played.”

Williams’ elder sister Venus, 40, was among the casualties on day three when she painfully rolled her ankle in the first set against Sara Errani before hobbling through a 6-1, 6-0 defeat.

And Andreescu, the 2019 US Open champion who missed the entire 2020 season with a knee injury, saw her comeback come to an abrupt end 6-3, 6-2 against Taiwan’s Hsieh Su-wei.

Elsewhere Kvitova, the former Wimbledon champion and Melbourne runner-up in 2019, committed 44 unforced errors in her 6-4, 1-6, 6-1 defeat to Romania’s Sorana Cirstea.

However Thiem, runner-up to Djokovic last year, was all smiles as he beat Germany’s Dominik Koepfer 6-4, 6-0, 6-2. 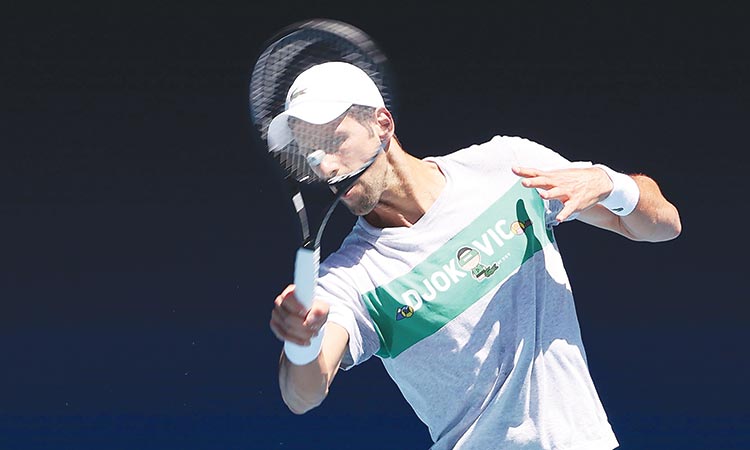