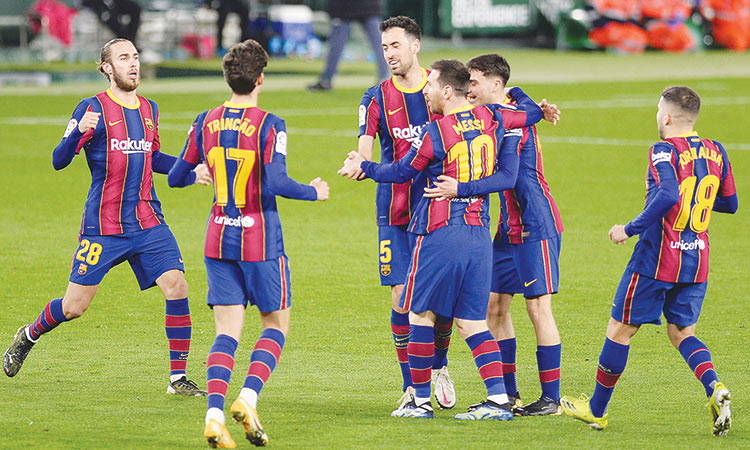 Barcelona’s Lionel Messi celebrates with his team-mates after scoring against Real Betis during their Spanish League match in Seville on Sunday. Agence France-Presse

Lionel Messi scored his fastest league goal as a substitute as his strike 136 seconds after coming on inspired Barcelona to a 3-2 victory over Real Betis on Sunday.

Defeat would have called that decision into question but Messi drove in an equaliser less than three minutes after coming on in the second half and then helped set up Francisco Trincao to score a late winner, the 21-year-old’s first goal for Barcelona.

“He changed the game,” said Koeman, when asked about Messi.

“It’s a bit about the cup game but we also have to decide when the best moment is to rest players. The cup is the shortest route to a title this season.”

Success also came at a cost as Barca’s best available central defender Ronald Araujo was forced off with an ankle injury early on.

With Gerard Pique already a long-term absentee, Araujo’s fitness will be a huge concern, especially with a Champions League last 16 first leg at home to Paris Saint-Germain to come, a week after the test against Sevilla.

Messi magic: Betis will wonder how they managed not to take at least a point from a wild contest at the Benito Villamarin but Barcelona sustain their momentum, this their sixth league victory in a row.

They were hit early by the injury to Araujo, whose ankle caved under the weight of an awkward fall. Frenkie de Jong came in at centre-back and his partner Clement Lenglet should have given Barca the lead but headed wide from five yards out with nobody near him.

Betis made them pay with a brilliant opening goal on the break. Ousmane Dembele lost the ball upfield and Betis poured forward, the ball shifted right to Emerson who motored round Jordi Alba and squared for Borja Iglesias to slam home.

Juanmi might have made it two but was denied by Marc-Andre ter Stegen before Messi came on for Miralem Pjanic in the 57th minute and equalised in the 59th.

Dembele returned a pass to the Argentinian on the edge of the area and he drove a sizzling shot inside the post.

Nine minutes later, Barca were in front, Alba’s cross mishit by Antoine Griezmann, only for the ball to cannon in anyway off the legs of Victor Ruiz.

Betis were not finished yet and neither was Ruiz, the defender making amends by heading in Nabil Fekir’s crossed free-kick with 15 minutes left.

Yet Barcelona had one more trick up their sleeve as Messi weaved in from the left and his chipped pass was headed into the path of the 21-year-old Trincao, whose thundering shot flew in off the crossbar.

Oyarzabal converted a penalty after Alvaro Negredo handled the ball. The Spain forward added a second before Cadiz defender Marcos Mauro was shown a direct red card for fouling a player with only the goalkeeper to beat just before halftime.

Isak scored his goals to make it 4-0 before David Silva went on as a substitute for his first appearance since December after recovering from a muscle injury.

DRAW IN BILBAO: Valencia defender Gabriel Paulista headed in a second-half equaliser to draw 1-1 at Athletic Bilbao, which had gone ahead from an own-goal by Hugo Guillamon. Marcelino García Toral rested several of his regular starters in the match against his former team. Bilbao has only lost twice in nine matches since Marcelino took over.

OSASUNA WINS: Ante Budimir scrambled in a ball that had come off the post to give Osasuna a 2-1 win at home over Eibar in a relegation fight. The striker’s attempt from close range ricocheted off the upright and his chest before going in.

Osasuna moved out of the drop zone and into 15th place. Eibar was left in 17th.