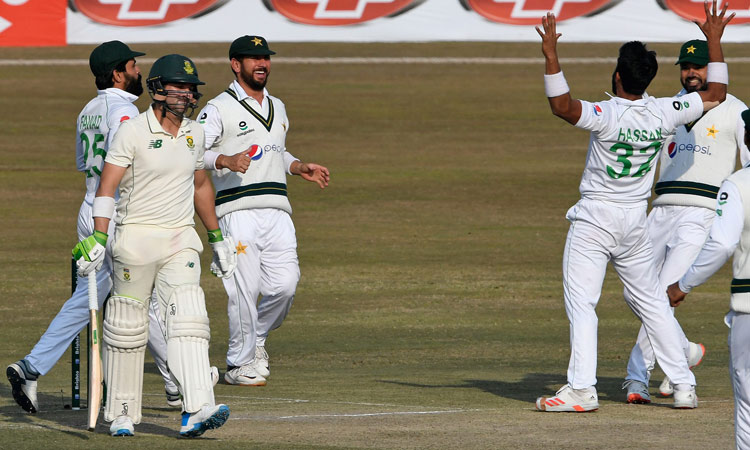 Pakistan's players celebrate after the dismissal of Dean Elgar (2L) at the Rawalpindi Cricket Stadium on Friday. AFP

South Africa were in trouble at 106-4 after the second day's play on a tricky Rawalpindi stadium pitch, trailing Pakistan's first innings total of 272 by 166 runs. 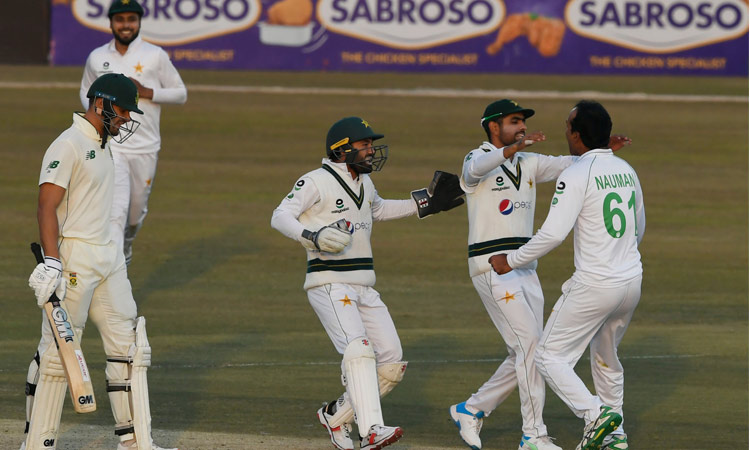 Hasan had opener Dean Elgar caught behind for 15 with the fifth delivery of his third over, and at the next ball bowled Rassie van der Dussen for a duck in the last over before tea.

Senior batsman and former skipper Faf du Plessis, who failed in the first Test in Karachi with scores of 23 and ten, managed 17 before he was caught behind off pacer Faheem Ashraf, playing a loose shot.

"It's important to score as much runs as possible in the first innings and that's why I hung in," said Ashraf. "The pitch is good for batting but if bowlers try hard they get wickets as well."

Earlier, Nortje grabbed his third five-wicket haul with 5-56 to restrict Pakistan's total. The 27-year-old took the prized wicket of Babar Azam off the second ball of the day before wrapping Pakistan's innings half an hour before tea.

Nortje bowled with fire and aggression on a flat, brownish pitch which was suited more to spin. Keshav Maharaj finished with 3-90.

Despite South Africa's controlled bowling, allrounder Ashraf played a knock of 78 not out studded with 12 hits to the boundary — his fourth Test half century.
Pakistan had looked to Azam and Fawad Alam to build on their partnership of 123 after rain cut short the first day to 58 overs.

Azam slashed at a short delivery from Nortje and was smartly snapped head high by du Plessis in the second slip for his overnight score of 77.

Azam's dismissal was the start of a mini-collapse which saw Pakistan lose two wickets in the space of 34 balls with the addition of just four runs after resuming at 145-3.

The other overnight batsman Alam was run out after he tried to steal a quick single with a push to cover but failed to beat a direct throw from Bavuma at the non-striker's end.

Alam could only add three to his overnight score of 42. Azam, who was looking set for his sixth Test century, had hit 12 boundaries off 127 balls.

Ashraf then added 41 with Rizwan but once South Africa took the second new ball Nortje struck again, having Rizwan caught off a miscued hook for 18.
Nortje said he used the bounce with the harder ball.

"I really enjoyed today," said Nortje. "Getting wickets and performance in the sub-continent means a lot. Hopefully I will grow as a fast bowler."
Pakistan lead the two-match series 1-0.